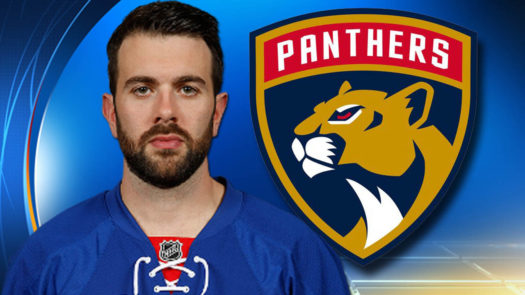 Much to the dismay of about half of Rangers fandom, the Keith Yandle era is over in New York. After dealing his rights to the Florida Panthers for a sixth and conditional fourth round pick on Monday, the Cats came to terms with Yandle on a seven-year/$44.45m contract yesterday. His deal includes a no movement clause for the first six (!) years of the deal, with a modified no-trade clause in year seven.

We all knew going into his big contract that Yandle would not come cheap. We also knew that his gross misuse over the past season would likely lead to his exit. The cap hit for the deal is a pretty representative $6.35m, but it was the term that really knocked me over. I certainly did not expect Yandle to get max term, but in a barren waste land of free agency and Alex Goligoski already off the board, I feel like the Panthers did what they had to do.

So, let’s talk about the Panthers for a second. First, they have a ton of cap space for the blue line with Brian Campbell and Willie Mitchell coming off the books. Second, with those guys moving on, they needed a puck mover to pair with super-stud Aaron Ekblad at the top of the depth chart. Florida has a very mediocre defense even with Yandle, and coming off their second division championship and a surprising run to competitiveness, the Panthers were in a position to make a splash. Couple this with their new branding efforts to usher in this new era, adding a player like Yandle made a lot of sense for the franchise.

Looking at the market so far, you have Alex Goligoski, who was acquired under similar circumstances to Yandle, receiving a five-year/$27.375m contract from Arizona. Outside of Jason Demers, these guys were the top two defensemen available. Goligoski is one year older than Yandle, but I would consider him the safer player. He got two less years a million less in cap hit. I can see why Yandle’s people jumped at the offer.

When the great BSB Yandle War of 2016 was taking place around here, I was decidedly pro-Yandle. I thought his useage was grotesque and he was getting run down for his supposed defensive inefficiencies. Make no mistake; the 2016-2017 New York Rangers are far worse off without him. It’s the 2020 Rangers that make this deal easier to digest. This is the type of gamble that the Panthers can afford to take. This is not the type of contract I would ever have advocated the Rangers ink, no matter how valuable Yandle was to this team.

As I mentioned before, it’s the term that gets me. Seven years for a 29-year old gets a little scary. I would imagine that Yandle probably has 2-4 “peak” years left and the rest of that contract will look pretty bad. If you were paying him on a 4-5 year deal, you could live with that. Eating potentially 3-4 bad decline years? Oof. I could be wrong, though, and the Panthers could get good value out of this contract. Hell, one Stanley Cup in the next few years would probably make it worthwhile. It’s just not a risk the Rangers are in a position to take.

Ultimately, it no longer matters. Yandle is a Panther and the Rangers will have to move on. I know the loss of the first round pick and Anthony Duclair still stings for most, and if you hated that trade on day one, then by all means continue to hate it. If you loved it until Yandle was misused, not re-signed and not traded at the deadline, then don’t fall for Outcome Bias.

It seems like the ground in shaking a bit with the expansion rules announced and multiple teams in cap trouble. There are more trade rumors abound leading up to the draft that I can ever remember. It should be an interesting summer ahead…