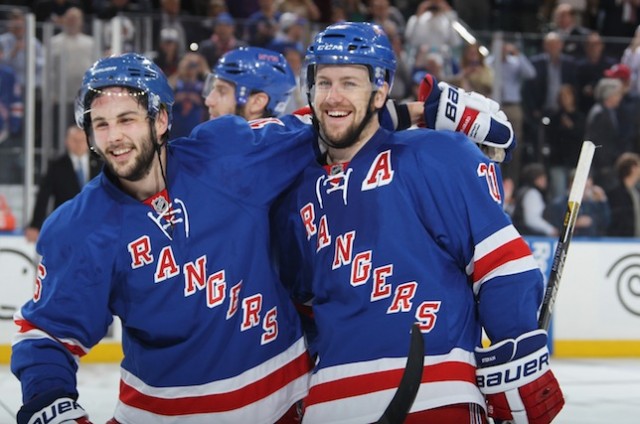 We’re approaching a significant few weeks in the NHL; for the Rangers but for the league generally. The draft, the Steven Stamkos sweepstakes, expansion (and all the fallout that comes with it), the World Cup of Hockey; all this promises to impact a busy and potentially landscape changing offseason. Let’s get into a Musings taking a look at both Rangers and league goings-on.

Do the Rangers have staffing issues?

So Rick Bowness stays in Tampa? You can’t blame the guy for staying in a good hockey situation (even potentially losing Steven Stamkos, the Lightning are well set) and I’m not sure what it says of Alain Vigneault’s ability to entice staff to New York anymore. It appears that Bowness won’t change employers unless it’s for another HC gig and the Rangers fanbase were never excited by this choice anyway.

The sad passing of Gordie Howe has been well documented and well covered. A true Sporting Icon has departed. Howe perhaps had the greatest influence and impact of any hockey player not named Gretzky perhaps his legacy is even greater than Gretzky’s. Howe truly influenced several generations.

Wayne Gretzky is calling for the league to retire his number and that would be a fitting nod to someone who (somehow) played meaningful hockey across five decades. It would be an appropriate salute to Howe if he were to join #99 as the only other number retired league wide.

I think I am in the minority amongst the writers here, but the Rangers need to make moves quickly that will allow them to keep Keith Yandle (of course) but perhaps most importantly, get Steven Stamkos.

Whether Stamkos is a realistic get or not; how often does a 50 goal scorer, in his mid-twenties become available at a cost of nothing but dollars? This isn’t the Rangers chasing an aging veteran, this is an opportunity to get a world class sniper with plenty of gas in the tank.

Remember this: free agency is getting weaker every year despite the costs only rising, movement restricting clauses mean (meaningful) roster changes are now minimal across the league and drafting isn’t an ideal option for a club that, in the case of the Rangers, are in perpetual win now mode and who are a club that rarely has a top ten pick where game changing skaters are to be found.

If the Rangers can move Nash for assets and replace his presence in the line-up with Stamkos it is a must-do (and I am an unashamed Nash fan). Think of the double effect: adding an elite talent and restocking the organisation with assets from a Nash deal; win-win, no?

My first summer prediction for next season: Derick Brassard will be a 30 goal scorer.

Randy Carlyle is back and in the one spot (Anaheim) where his style may still work. The Ducks could again be dangerous next year if Carlyle has buy-in from his roster. Mike Yeo has joined the Blues as Head Coach in waiting. With Ken Hitchcock retiring in a year’s time that isn’t going to end well. Long drawn out changes such as this, they never work.  It appears Glen Gulutzan is taking over in Calgary. None of these moves really impact the Rangers.

Avs getting antsy in their pantsy

I really hope Jeff Gorton is taking aim at the Colorado Avalanche. The once powerhouse club is publicly so desperate for change it could be ripe for a trade theft. Everyone is in play, the coach and the president going public with their needs and the club being linked to every name under the sun… For any of you that concern yourselves with hockey played outside of the Garden, the Avs offseason will be one to watch.

Do not panic: Chris Summers is not Keith Yandle

Chris Summers re-signing is naturally an AHL depth move and nothing else. It’s important a team has depth, but also continuity to some degree. Summers will help the ‘Pack navigate through a summer and upcoming season of huge change. Don’t underestimate the presence of a solid AHL veteran.

Free Agency: we love you no more

Seriously, aside from retaining Keith Yandle and taking a run at Steven Stamkos there is precious little on the free agency horizon to get excited about. Big names? sure. Value to be had? Precious little.

Players such as Milan Lucic, David Backes, Radim Vrbata, even Loui Eriksson may all offer brand value and some immediate production but every single one of them will get contracts that will cause problems long term. If the Rangers cannot retain Yandle and cannot get Stamkos then as a fan, I want no part of the crazy auction that the opening hours of free agency has become.

I’ll offer my opinion on the Vegas expansion and the Hockey World Cup next time but for now, let’s have Vegas kick off our Question Time for this week…