One of my favorite things about the draft is the trends among teams. I find it so cool how we can see history for the most part repeat itself over and over showing some team philosophies. For example, anybody find it odd that Jim Benning of the Canucks has traded every second round pick the team has had except the Thatcher Demko pick? These picks aren’t just your late ones, these are those borderline first round picks that only strengthen the running joke among fans who believe Benning is never allowed to make a pick from 30-65.

In the Rangers’ case –like we saw in the 2013 draft with Anthony Duclair, Pavel Buchnevich, Adam Tambellini, Ryan Graves, and Mackenzie Skapski– when they lack early picks they go big boom or bust. This situation currently presents itself again for the Rangers. We are likely to be going for these kinds of players who slide for some reason and hope that they either mature or simply get to show their talents under the right circumstances. One guy who I noticed fits this criteria is Dmitri Sokolov of the Sudbury Wolves in the OHL.

This is Sokolov’s first season in North America, so he did have a rough adjustment at first. Then you factor in that he his team lacked talent to support him and it didn’t create an environment for him to show his stuff.

Sokolov is built like a bull, at 6’1″ and 205 pounds. He is pretty scary at his age but then he only adds to it with his creativity when the puck is on his stick and absolutely blistering fast wrist shot. He was originally seen as a possible top-ten pick, but he didn’t adjust fast enough in the OHL. When it comes to his skating, it isn’t necessarily a weakness, but he’s no Chris Kreider out there. He uses his body more like a power forward, and I think he projects as a physical secondary scorer.

Here’s how he compares to consensus second round pick Noah Gregor, who plays on a much stronger team with players like Brayden Point and Dryden Hunt. 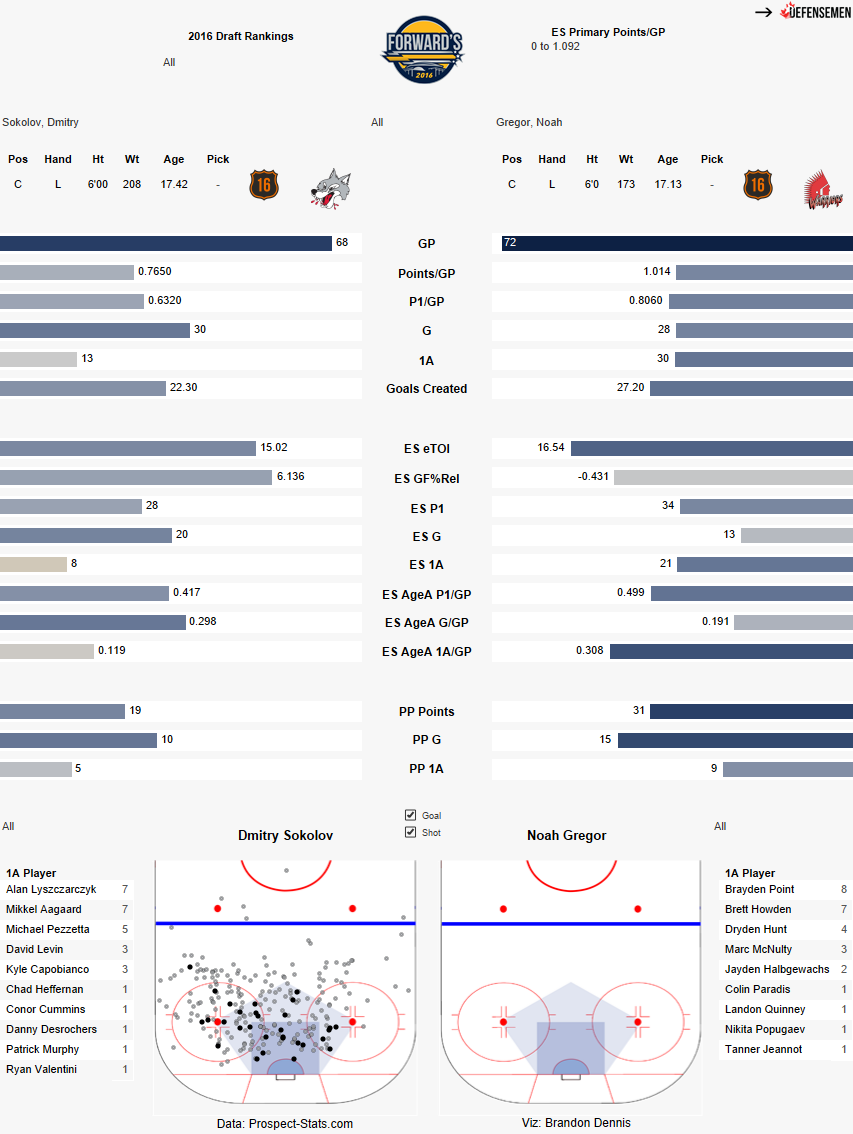 You can see that the even strength numbers are significantly closer than you might expect, even if Gregor does have the overall lead in points. You can infer that Gregor’s numbers may be inflated because of his teammates and powerplay success. While Sokolov has done very well with significantly less.

He will need to work on his agility as most younger powerforward type players do at his age. According to some other reports, Sokolov has endurance issues and isn’t exactly 205 lbs of muscle, but I do think that with how pro hockey is now and days that will be taken care of through his development. He is likely to go in round four, so I find it hard to believe that the Rangers will pass on someone who fits their boom or bust mindset given his skill set. He is a project player but someone that we absolutely must try to add into the prospect pool.