Raphael Diaz over Dylan McIlrath might be the right decision

Raphael Diaz was recalled by the Rangers yesterday, much to the chagrin of many fans, as Dylan McIlrath seemed to finally be getting a legitimate chance with Dan Girardi out of the lineup. The hope was fair, as McIlrath really had done everything he could to warrant a longer look with the team. Alas, he was limited in his playing time in Game Two, and only saw ice time late because Kevin Klein was in the box.

This led to the speculation of the Diaz recall, and to be fair, Diaz is an NHL defenseman. He’s another one of those guys, like Matt Hunwick, that floats under the radar because he isn’t flashy or physical. He just moves the puck up the ice and starts the breakout. Couple that with his skating ability –which is significantly better than McIlrath’s– and you have a guy that is exactly what the Rangers need.

This isn’t a slight against McIlrath, who has exceeded all expectations. However the speedy Penguins can exploit his foot speed, and that leads to bad matchups. For all of McIlrath’s strengths with angles, he can only do so much if he can’t keep up. That’s where Diaz slides in. He can keep up, and he’s better at that first pass than McIlrath. 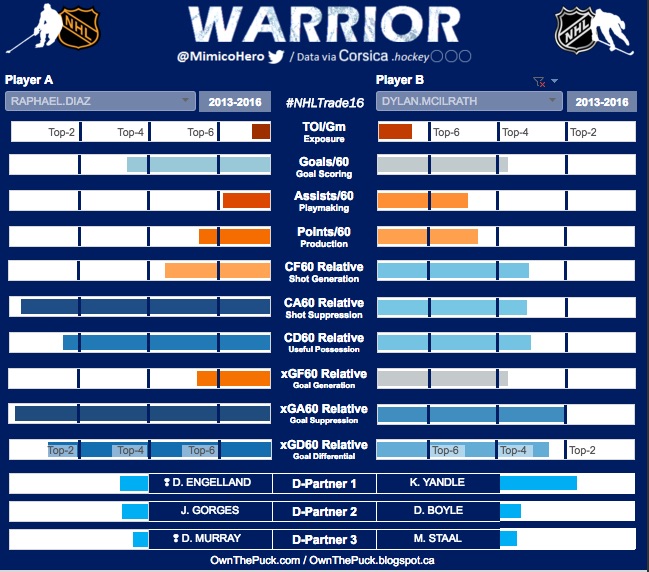 Here’s how Diaz compares to McIlrath. If you look at just the top bars, they look somewhat comparable. However I want to focus on CA/60, CD/60, and xGA/60 (expected goals against, weights shots and quality attempts against to gauge effectiveness). All three of these categories put Diaz as a top shot suppressor in the league. Two major skills are required for this: Solid positioning, and quick transitions out of the zone. Both of these are skills Diaz has in droves.

McIlrath’s numbers are solid too, but it’s worth noting that a good portion of his success may be attributed to his continued time with Keith Yandle as his primary defense partner. Yandle covers up a lot of mistakes, as we saw with Girardi’s statistical improvement when paired with him. Is it possible that McIlrath’s deficiencies were covered up by Yandle? Certainly. We don’t know with the small sample size.

However Diaz, on the other hand, has played with anchors Deryk Engelland and Douglas Murray. Neither are known for their defensive prowess or their foot speed. Both are known as being physical guys, but neither are names that pop into your head when you think “quality defenseman.” Diaz, despite being saddled with these anchors, still put up great defensive numbers.

With the Rangers in desperate need of improved defensive zone play, Diaz over McIlrath makes sense. It’s not popular, especially since McIlrath deserves time. But it’s the playoffs. Mobile blue lines are the key to success, and Diaz certainly fits that mold. It might be tough to swallow, but Diaz over McIlrath –and Girardi– could be the right move.