There are going to be those that look at the box score, specifically the Corsi numbers, will say the Rangers got dominated and were a product of good shooting. While the second part is true –two goals banked off Bruins, although from good angles– the shot attempt (Corsi) numbers are very misleading for this game. For starters, the Rangers jumped out to a quick 2-0 lead, so score effects are a thing for this game. Second, despite the number of shots, the Rangers really limited the Bruins to the outside. It was a clinic.

There were blips, specifically that one shift where Dan Girardi turned the puck over three times in a one minute span, but the Rangers persevered. The penalty kill was sloppy, but the puck didn’t wind up in the net. What matters is that the Rangers picked the Bruins defense apart, and it was ugly for the Bs. Their defense is their Achilles heel, like the Rangers. But as mentioned in the game thread, the Rangers have better overall depth, and they feast on teams with holes on defense.

This is the second strong game in a row for the Rangers. A good thing. I’d prefer they didn’t give up third period goals, but that’s a thing this season apparently. Sigh. I’ll take this game.

On the powerplay, Keith Yandle simply made a brilliant pass down to Mats Zuccarello, who banked it in off Tuukka Rask’s arm. Yandle feigned shot the whole way, not even looking at Zucc, and just put it right on his tape. Wow.

Yandle did it again on the powerplay, this time with Derek Stepan finishing. Yandle simply drove all the way down the ice, splitting two penalty killers, while Stepan joined in late. Adam McQuaid didn’t pick up Stepan, who had a tap-in once Yandle made the perfect pass.

After a little tangle at center ice, Kevin Klein found Derick Brassard with room. This is just a rip. Bottom gif is in real time. Sorry for the quality of the top gif, but that’s NHL.tv for you.

Ryan McDonagh was pressured into a turnover by Patrice Bergeron, which turned into a 2-on-0 for the Bruins. Brad Marchand fed Lee Stempniak, who buried it. This one counted.

Loui Eriksson did a good job to make a backhand pass to Frank Vatrano on this shift. Dan Girardi bit on the loose puck and didn’t block the pass in the process. Left Vatrano open. 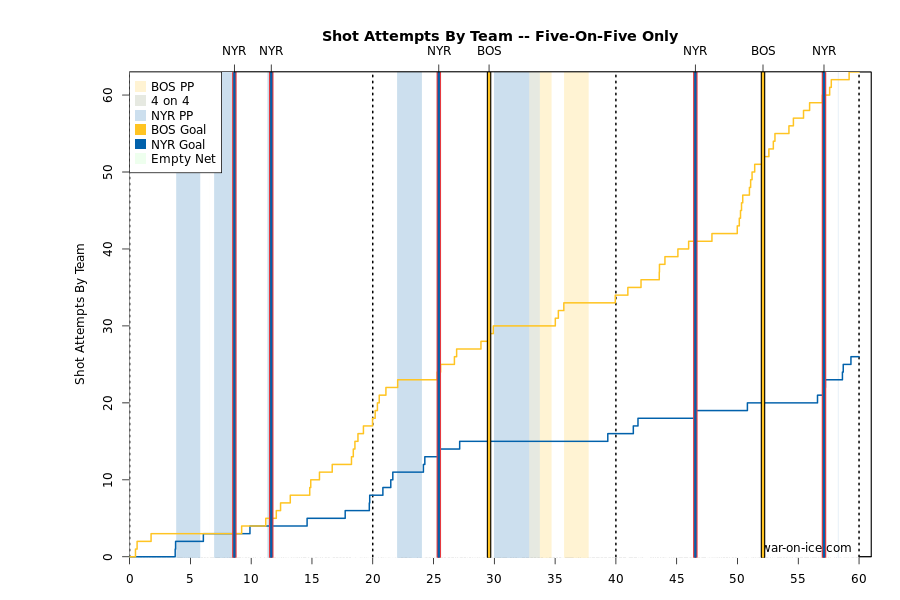 This is absolutely riddled with score effects. You can tell the Rangers focused on defense once they took a 2-0 lead, but they also converted their chances when they could. 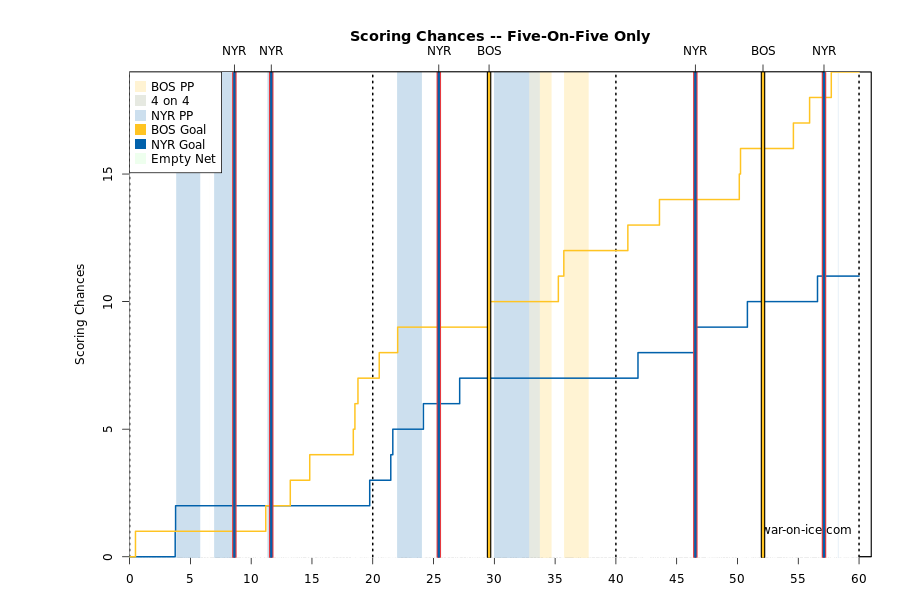 This is what I was referring to above. Despite the quantity of shots allowed, the quality just wasn’t there for Boston. The Rangers really shut them down. 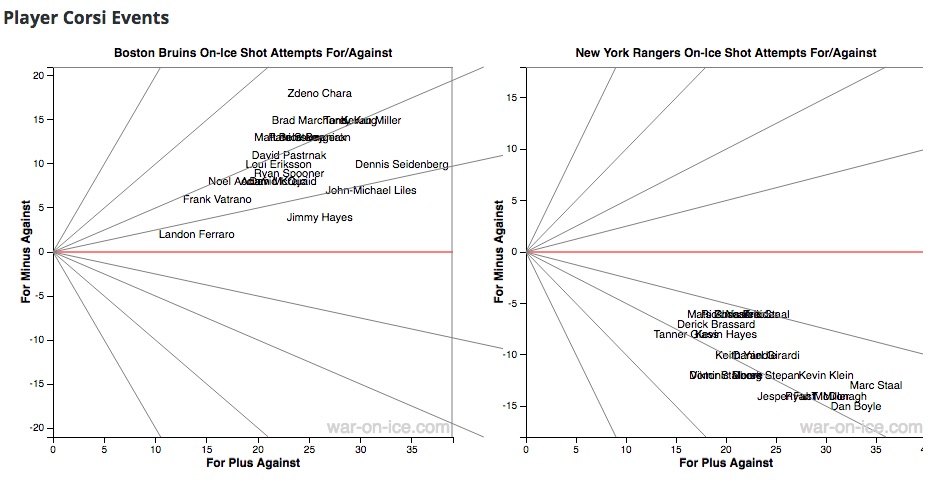 Score effects. I wouldn’t pay too much attention to this. 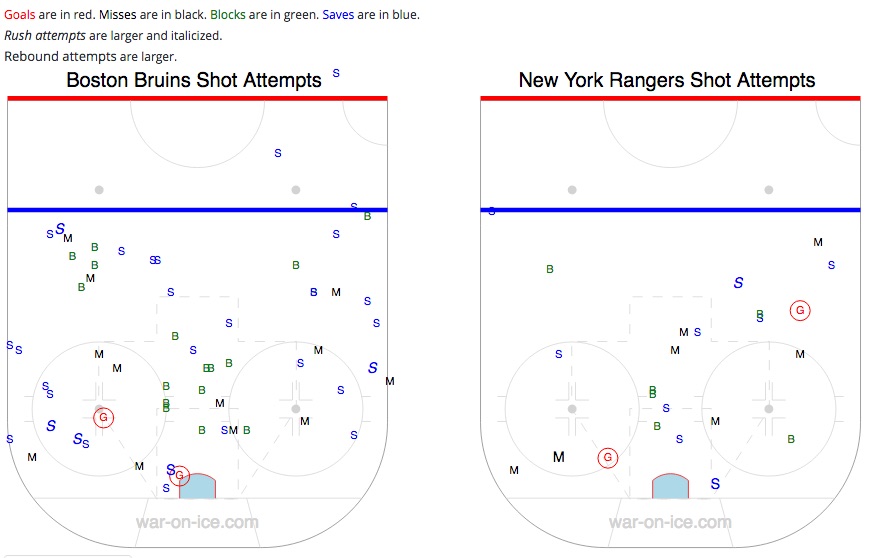 Everything is to the outside, as mentioned above. I’d like to see the Rangers get more even strength shots, though. 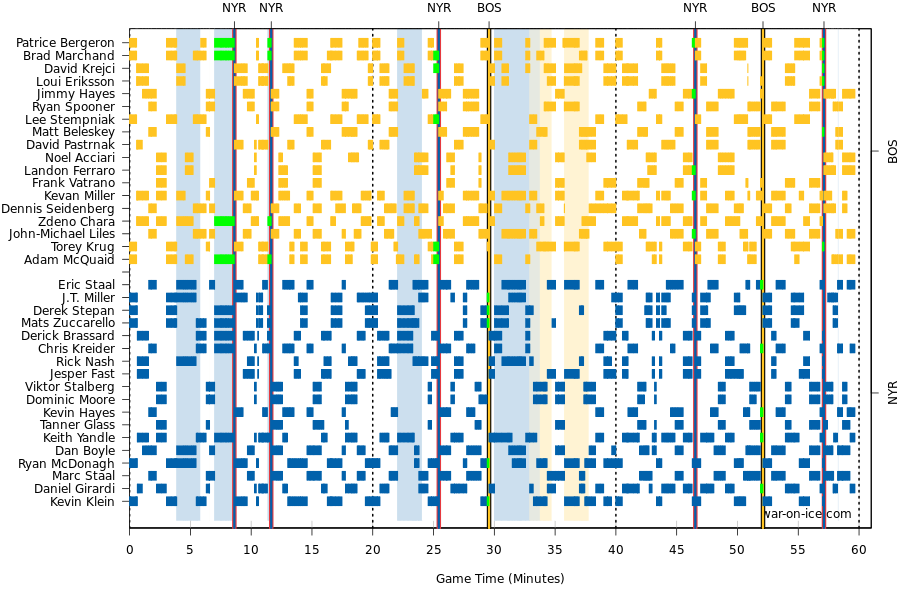 This is a bit al over the place, but it looked like Alain Vigneault wanted to get McDonagh and Kevin Klein out there against the Bergeron line. It makes sense, as it’s top pairing (shutdown) against top line. That’s the AV staple. Other than that matchup, not much else to really note on AV’s deployment. Normal defensive deployment at the end too, nothing changed.

This was a solid game for the Rangers, who have beaten two of the East’s top teams. That’s a big confidence boost for a team that hit rock bottom in San Jose over the weekend.