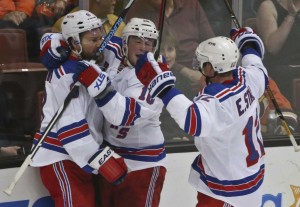 For the past several years, there has begun a philosophical shift in how the game of hockey is analyzed. The emergence of advanced statistics and more intricate systems-based strategies have highlighted this rift between the new and old school. Player evaluations and scouting fundamentals have evolved and the game has slowly taken on a new image.

This season, more than ever, I have observed a fundamental division of thought in what we characteristics and skills we value in a hockey player. For example, conventional wisdom has always taught us that a guy who will deliver a big hit, block a shot, or otherwise sacrifice his own well being for the betterment of the team was the type of player worth valuing. As our understanding of the game has evolved, we have come to look at the information that surrounds those traits. The reality is that when a player is performing those types of actions, it generally means that they don’t have the puck. Even the old edict will tell us, the other team can’t score when they don’t have the puck.

No player has embodied this difference in perspective more than Keith Yandle. Even guys that have played this game their entire lives disagree on his value.   “He doesn’t play defense”, his detractors will say. I’ve found that simplifying the concepts in my defense of Yandle has helped. I will usually reply, “there is no better player on this team at taking a puck in the defensive zone and transitioning the puck to offense”, and isn’t that really what defense is? The point is, we have a picture in our head about what certain hockey functions look like and we stubbornly cling to them, even in the face of contrary evidence.

Which brings us to the Rangers, as a whole. We have had an entire off-season, 71 regular season games, and a trade deadline so far to evaluate this team’s status as contenders. There is a vocal faction of the fan community that bemoans every time Dan Girardi steps on the ice and an equally loud segment that feels he is a loyal soldier that still goes out, shuts down opposing stars and gives up his body for the sweater. We have vomit inducing performances against the Islanders, Jets, Oilers and Flames but have beaten the Blackhawks, Sharks, Caps, Blues, Ducks and Stars; sometimes handily.

I understand the frustration (I feel much of it myself) of many fans when it comes to AV’s deployment, ice-time allocation and lineup decisions, as a whole. I was against the Eric Staal trade before it was made (although the reasonable price helped matters), but once it was done, my perspective was that management was going to do whatever it took to make the team competitive during Lundqvist’s window, future assets be damned. Ok, if that is how you’re going to go, they should have been looking to improve all the fringes of the roster. Brandon Pirri, a depth defender, something to round out the rest of the group. Waive Glass again. Something that didn’t make the Staal acquisition just look like a band-aid. As we all know, Staal was the only move.

Now the Rangers are locked in. Their roster is their roster and they are going to win or lose with this group. I think the most frustrating thing is that we have absolutely no idea what this group is capable of over the course of the playoffs. Their process has been appalling at times (most of the time) and yet they have beaten what appears to be superior competition. We also have no confidence that AV will make adjustments. On the other hand, they could get hot in the playoffs and make a deep run. They clearly have talent. They are deep down the middle and have elite goaltending.

So, where are we? I think that is the problem. Fandom is about attaching yourself to the dream of victory and analysis is about taking the information in front of you and making an informed hypothesis based on that information. This team has made both of those things very difficult this year. Until the box is opened in April, the Rangers are the hockey equivalent of Schrodinger’s Cat.