The Rangers came into St. Louis looking to rebound after unraveling in the second period in New Jersey. They rebounded in a sense of the word, coming out with a 2-1 win, but the win was almost entirely on the back of Henrik Lundqvist. The King made 35 saves, many of them difficult, holding the Blues to one goal that came off a lucky bounce.

The Blueshirts got their offense from Tanner Glass and Chris Kreider, and it was enough with Hank on his game all night. Glass scored his second of the season, which was assisted by Dan Girardi. Twitter broke after the goal. All jokes aside though, that goal was a great shift from everyone on the ice. It was one of the lone highlights of the game from the skaters.

As alluded to in the title, this game was a process fail for the Rangers. The Rangers were badly out shot, out chanced, out attempted, and out played throughout this game. It wasn’t as bad as that Nashville game in November, but it was close. Hank stole this one, tough to argue against that.

The fourth line did a great job on the forecheck, pressuring the Blues into a turnover to Dan Girardi at the blue line. Girardi wristed it on net, and Tanner Glass deflected it for his second of the season. Sorry for the bad angle here, best MSG gave.

After Girardi took a four minute high sticking penalty, the Rangers got victimized again on the penalty kill. You want that pass from Jay Bouwmeester to Paul Stastny, through the slot to the other faceoff circle to be stopped. They’ve been allowing that pass too much, it’s hole in the diamond formation and they need to be cognizant that this play is killing them. After that Stastny’s shot was stopped by Hank, but the rebound went off Troy Brouwer’s leg and in.

After Lundqvist had to make a save on a breakaway, Oscar Lindberg got the puck out of the zone and started the rush. He drew the attention of two Blues while Chris Kreider cut to the net. Lindberg made a pretty pass from his knees, and Kreider finished. 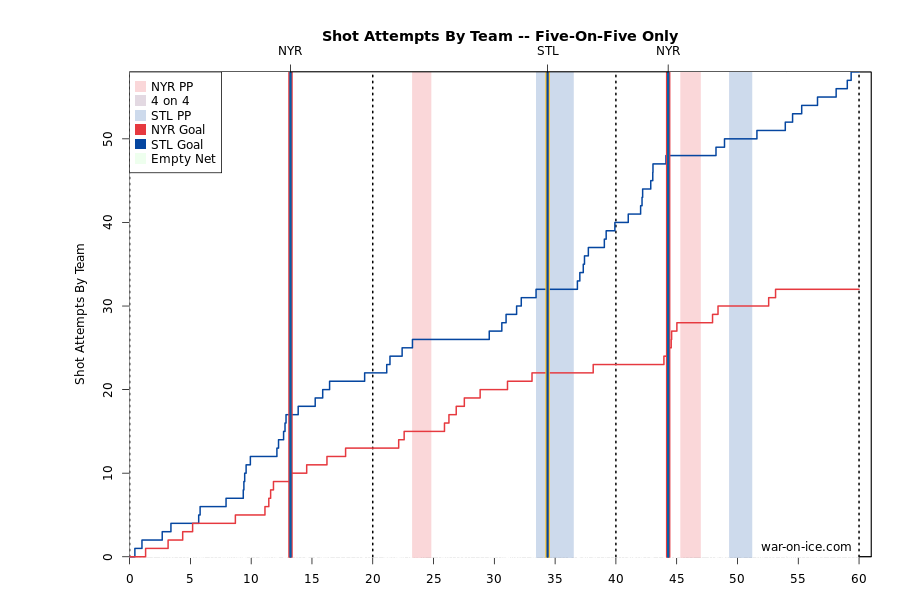 Not a good look for the Rangers, this is just under 60 attempts allowed to 30 taken. That’s almost a 2:1 ratio. 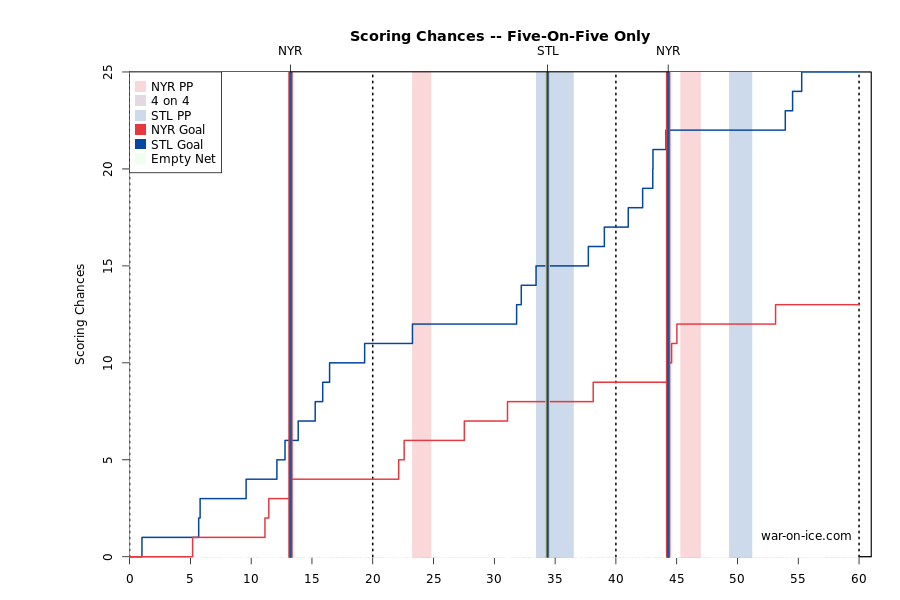 St. Louis had 25 of their shot attempts as quality scoring chances. The Rangers were at 12. Again, not good. 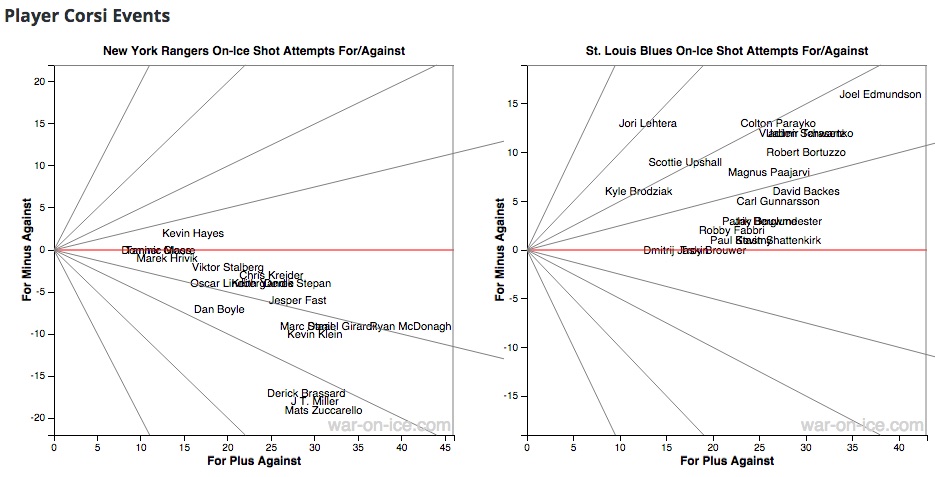 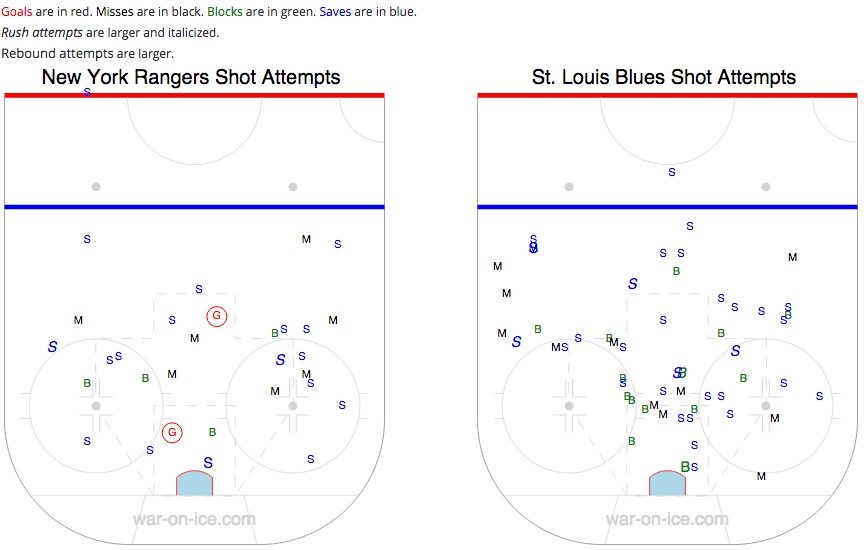 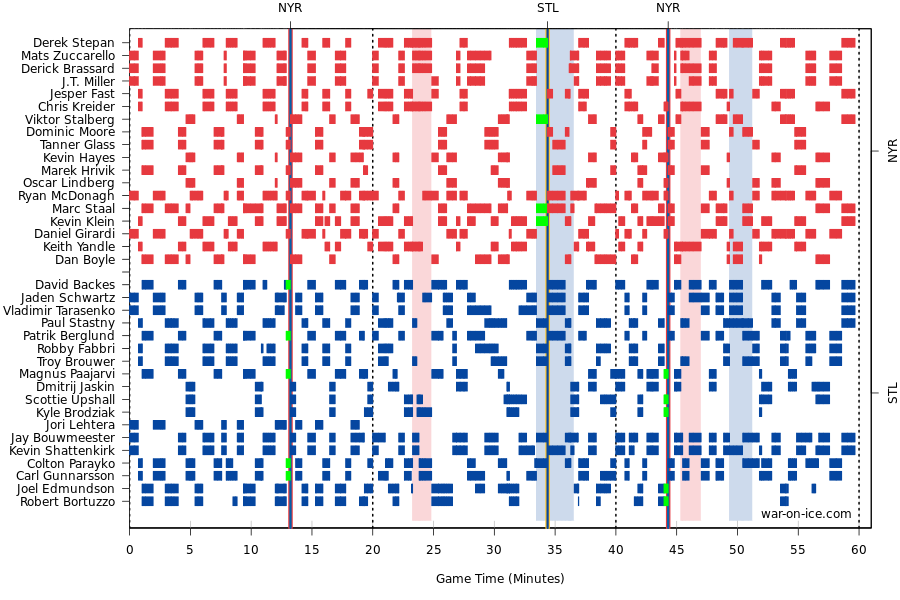 The Rangers caught a break –I know it’s bad to say this, but perhaps the game is different if it doesn’t happen– when Jori Lehtera went down in the first and didn’t return. From the beginning though, it looked like AV wanted to get McDonagh/Girardi out against that line. Once the injury happened, the matchups were jumbled as Hitchcock messed around with his lines.

If the Rangers play like this in Dallas, they will get crushed. But sometimes you need to let your goalie steal one. This was one of those games.