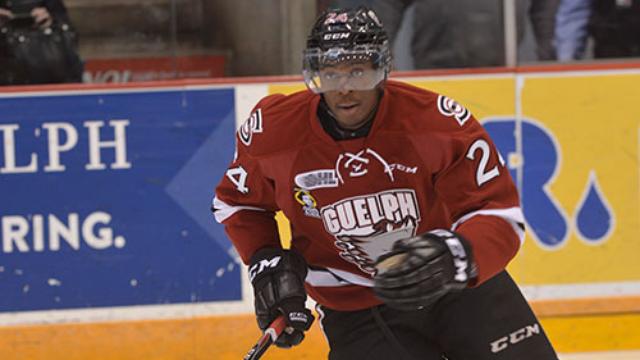 Hard to believe that this NHL season is already half way overm but while watching this roller coaster of emotions called the New York Rangers I have continued to work on some of my hockey visualization projects as well as scouting some players for the upcoming NHL draft.

According to Generalfanager.com, the Rangers currently have six picks for the 2016 draft. A 2nd, 3rd, 4th (from Arizona), 5th, 6th and 7th. I fully expect the Rangers to end up with around eight by the draft after trades, either by cap casualty trades or moving back to get two or three exta picks. In any case I have been watching some players in juniors and Europe to try to find some targets that would be able to either fit the system or are simply prototypical NYR picks.

Givani Smith (pictured above)- Smith is a former 1st round pick by the Barrie Colts who had some flashes of offensive abilities when he was younger before being moved to the Guelph Storm in a trade deadline. This season however has been a resurrection for him as he is now a big part of his team and a nice point producer. Smith is a guy that can most likely be picked in the fourth round, as his realistic potential is a solid third line scoring forward.

Smith is a 6’1, 200lbs forward who to is an absolute pain to play against. He is a good skater, gets in on the forecheck, and is an absolute hound on the puck who does whatever he can to steal it from the defense to set up a play. If he continues to develop he will be a nice power forward who has the hands to create plays in tight.

One of the biggest things for me about Givani is that he is without a doubt a go to guy on a very weak Guelph team. He creates plays and plays every situation for his team. He will screen the goalie and work in deep for puck retrieval on the powerplay. On the penalty kill, just like he does on the forecheck, he does whatever he can to get to the loose puck.

He still needs to work on being more of a finisher, but that may come as he gets surrounded with more talent. At only 17, he is the heartbeat of his Guelph team. Most OHL picks don’t turning pro until they’re 20, so there’s a chance that Smith develops into a leader for a Guelph team that should only get better. He’s certainly trending in the right direction: 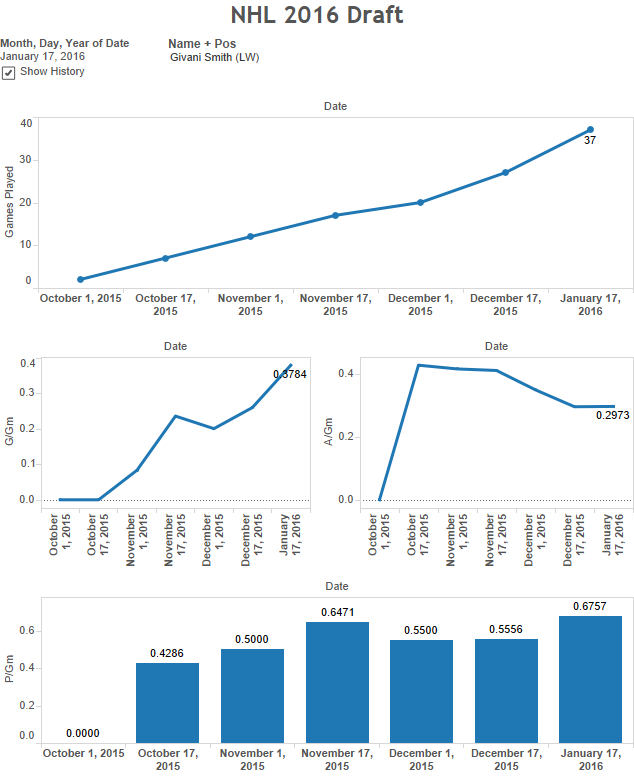 The top graph shows that Smith has become an integral part for the Storm, as his games played have increased dramatically in the past month. The middle two charts shot that his goals per game is steadily increasing over time, and his assist per game are leveling out at around .3 assists per game (one assist every three games). The bottom chart shows that his total offensive output (point per game) has steadily climbed to .67 points per game now. All in all, Smith has shown constant improvement all year, and is gaining the trust of the coaching staff with more playing time. 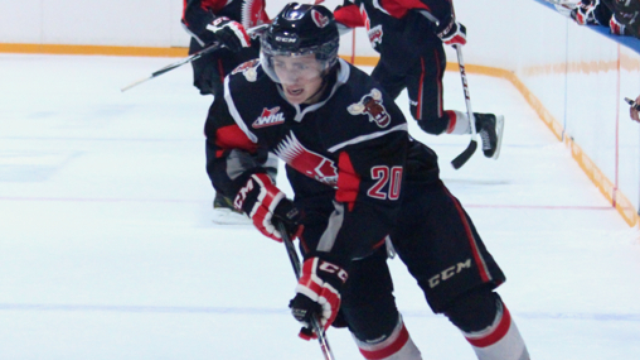 Noah Gregor- Like last summer with Brad Morrison I can just feel that the Rangers will be drafting Noah Gregor. Gregor is a center/wing with a 6’0, 174lbs frame and is an example of a player who, despite his size, can create plays off the boards. Gregor has 38 points in 42 games which can be attributed to him playing with one of the better players in the WHL, Tampa Bay Lightning prospect Brayden Point. However, Gregor is 60th in primary points/GP (goals + primary assists) in the WHL and is younger than all of the players ahead of him (data found at http://www.whl.prospect-stats.com/). Gordie Clark and the Rangers have chosen a player from the WHL in every draft since 2010 except the 2012 draft when they only had 4 picks (Skjei, Nieves, Andersson, Spelling), so there’s also a precedent here.

Gregor is currently expected to go in the mid rounds by NHL central scouting, which is also where the Rangers tend to pick these WHL players. He is a fine skater and is already getting top line minutes already, and there’s a chance he becomes the go-to guy once Point turns pro next year. Gregor isn’t afraid to get to the net or use his shot, something the Rangers need in their system for sure. Gregor was also one of 40 players selected to be in the CHL top prospect game. 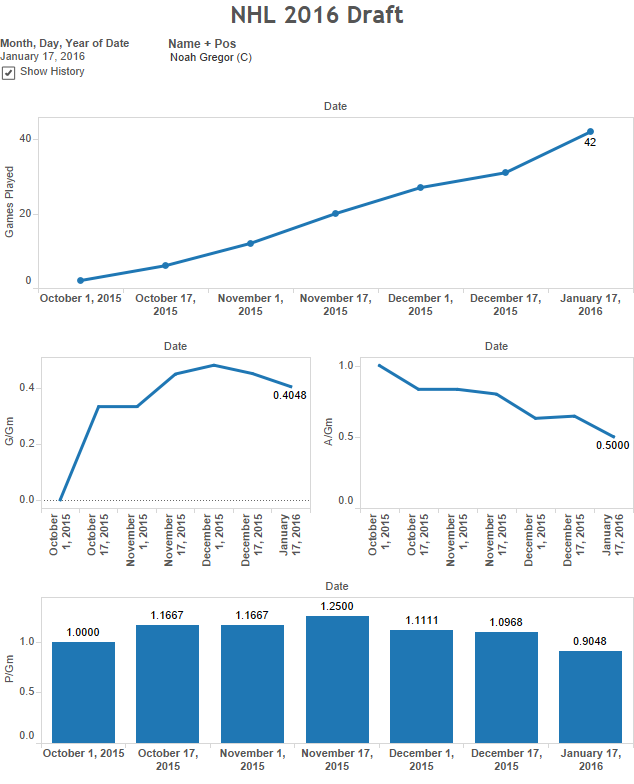 Looking at his breakdown, Gregor comes in at just under a point per game average as one of the younger players in the league. His ice time is increasing though, so while his production may be coming down slightly, he’s certainly gaining the coaching staff’s trust.

Overall if Gregor is available in the fourth or fifth rounds, it’s a risk worth taking. Gregor already has many tools to succeed and appears to be on the fast track to being a key player with lots of ice time for the rest of his Juniors career. These are key attributes when looking at potential draftees.