The Rangers beat their bitter rivals the Philadelphia Flyers on Saturday afternoon in a shootout, capping off a game that featured plenty of chances and two great goaltending performances. With the Rangers coming out on top Henrik Lundqvist became the first goalie in NHL history to earn at least 20 wins in each of his first 11 seasons, and Steve Mason played a solid game as well.

Although Philadelphia took the lead early the Rangers came right back and applied the pressure, eventually leading to a sensational goal from JT Miller later in the first. Despite Chris Kreider having the lone goal in the second the Flyers kept things relatively even for the first half of the frame and then spun some momentum out of their opportunities on the man-advantage, carrying it with them into the third. Wayne Simmonds then tied it up and while the Rangers made a late push the game went to overtime.

After a scoreless overtime period the game went to a shootout, where Mats Zuccarello put the kibosh on things with a dazzling goal on Steve Mason. While this was perhaps not the Rangers’ prettiest victory it was a solid two points on the road (in front of the Rangers’ moms!), and hopefully they can carry the momentum with them to Washington on Sunday.

A poor shot decision by Chris Kreider gives Philadelphia the opportunity for the quick transition that eventually leads to the first goal of the game. Sean Couturier drops the puck off for Shayne Gostisbehere who rips the shot from the blue line. Raffl then gets the tip on it but Lundqvist makes the save, although Couturier the picks up the rebound and slides it across the crease to Brayden Schenn, who puts it home for the Flyers.

Not too much to see here: Ryan McDonagh with a beautiful pass through the neutral zone right to the tape of JT Miller as he comes across the blue line, Miller lets the shot fly, and the Rangers are tied at the end of the first period.

This play starts with the kind of stretch pass the Rangers love hitting Derek Stepan right at the blue line. Stepan then cooly controls the puck and puts it across for Rick Nash, who enters the zone with Chris Kreider coming in hot on the opposite wing. Nash sends Kreider a nifty backhand pass as he breaks to net, which Kreider puts away to give the Rangers a one goal lead.

The Flyers tie it up with a nice tick-tack-toe passing play on the man-advantage about halfway through the third. The play starts with Gostisbehere working the puck down from the point to Giroux at the top of the left circle. Giroux then puts the pass cleanly across the slot for Voracek at the opposite circle, who then moves it to Wayne Simmonds directly in front of the net for the tap in goal. A simply gnarly passing play that caught the Rangers’ defense unaware ties the game to eventually send it to overtime.

Wasn’t much to see in the shootout except three saves from Hank and one righteous move from a righteous dude. 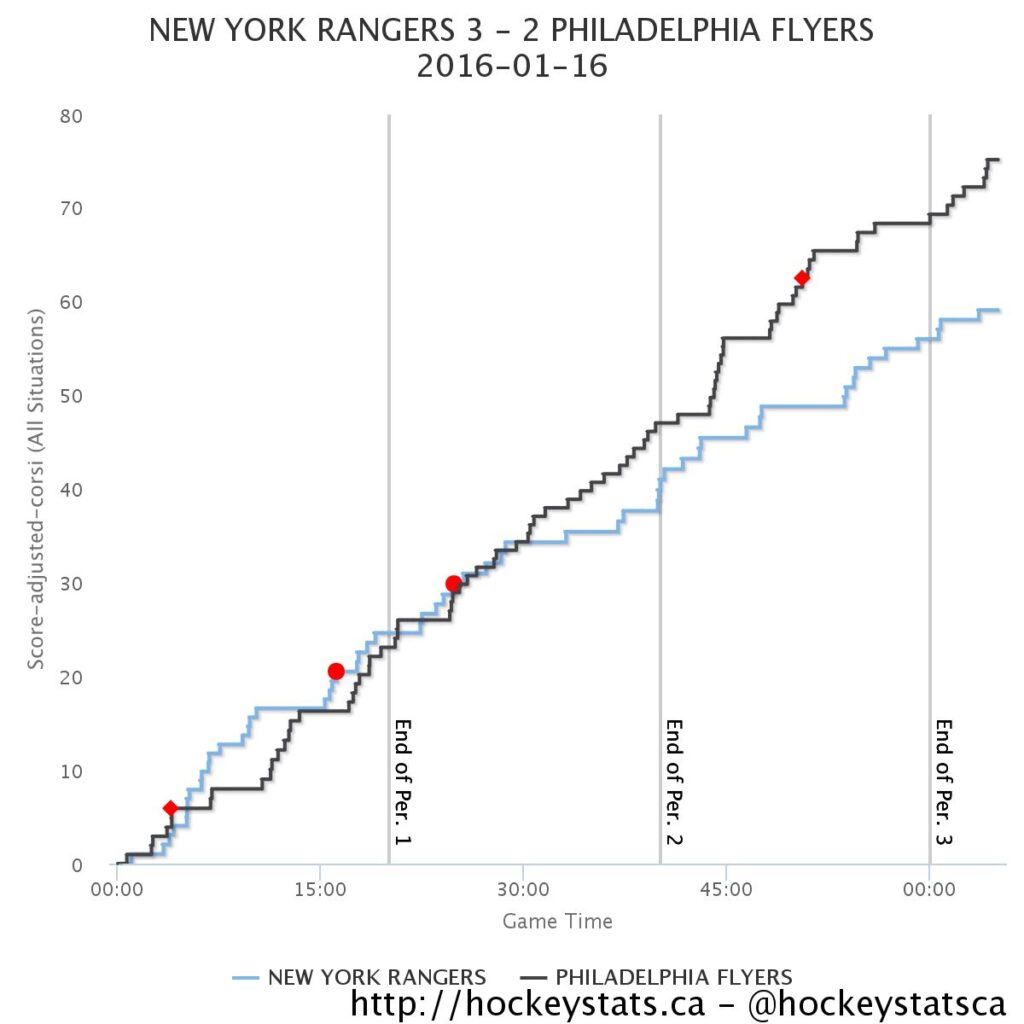 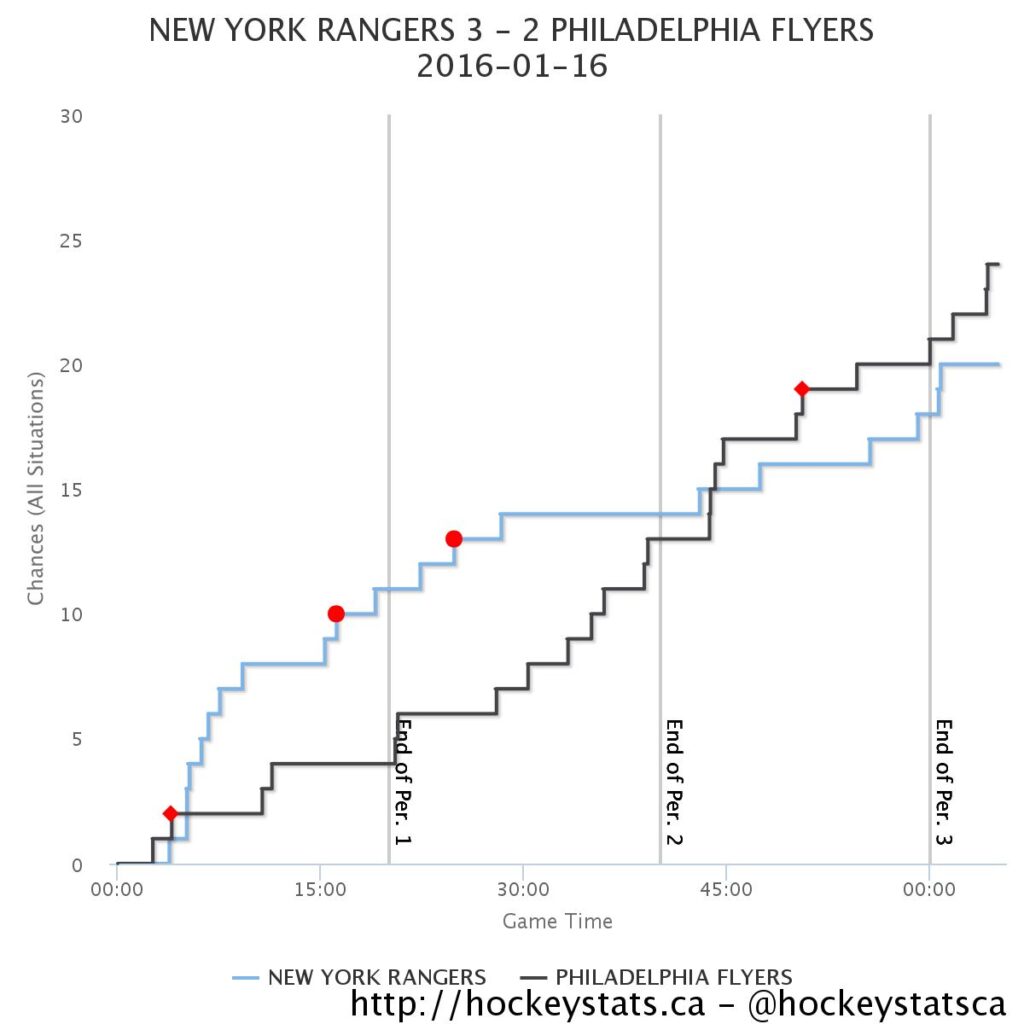 The shot attempts chart here tells us what was plainly evident from watching the game: the Rangers had some momentum early, and then the Flyers began to bring it back in the second and third periods. Scoring chances tells a little bit different of a story however, with the Rangers holding the lead through two periods and then keeping it relatively even in the third.

Obviously you’d rather that first chart being a little more favorable to the Rangers, but taking into account the scoring chances differential qualifies the loss of momentum in the second and third periods a little bit. All in all what these charts will tell you is what we all saw: the Rangers were pretty good in general but not particularly great at times. 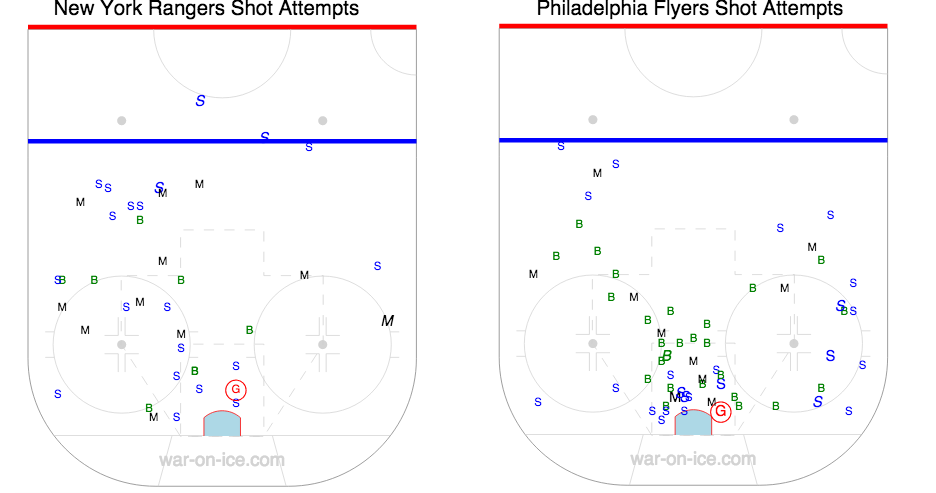 Not exactly what you’d want to see against a team that has an outstanding goaltender and some serious fire power up front but the Rangers got away with it. Here we can see that the Flyers had a large amount of shot attempts in the slot area, while the Rangers were kept largely to the outside. 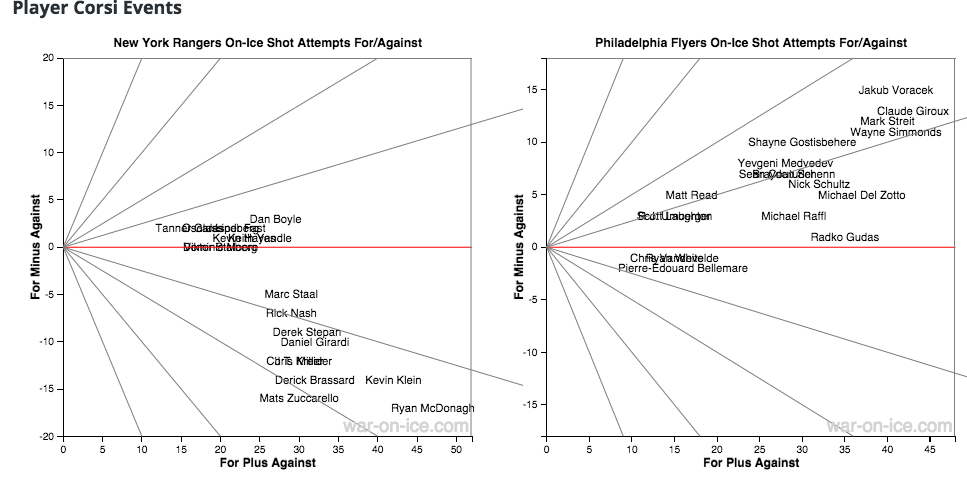 Here we can see that while a significant portion of the Rangers roster had a tough game possession wise the Rangers third and fourth  lines and puck moving defensemen carried them in this department.

It was almost exactly what you’d want out of a rivalry matchup like Rangers/Flyers – outstanding goaltending from Henrik Lundqvist, and exciting game overall, and of course a Rangers victory. The Rangers’ next game is an equally, if not more important divisional matchup against the Capitals, against whom they can hopefully fine tune their game and keep up the momentum from this victory.