Forwards Stats To Chew On 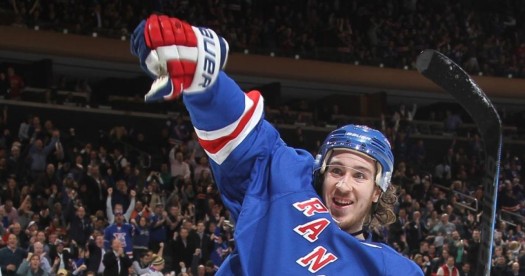 We’ve discussed the Rangers’ problems on defense ad nauseam, but the decline in production amongst the forwards is a factor in the team’s struggles as well.

Despite ranking fourth in the league in offense just past the halfway mark, the team is mainly riding one of the NHL’s top scoring defenses, a suddenly powerful power play and some lucky shooting by a few key individuals. The Blueshirts have a lofty goal total, but in fact the team’s forwards are nearly all having down years in production.

Here’s a look at the returning forwards’ scoring stats from last year compared to their current pace: 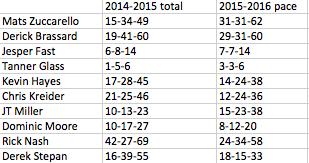 Rookie Oscar Lindberg will almost single-handedly replace the departed Carl Hagelin’s output and Viktor Stalberg has contributed 13 points, but the Blueshirts have been unable to fill the void created by Martin St. Louis retirement.

The diminutive forward struggled towards the end, but he did post 52 points that have gone basically unaccounted for this year. Youngsters Chris Kreider, JT Miller and Kevin Hayes were expected to increase their contributions, but Miller is the only forward on the team to see a significant uptick this season.

We can expect Nash’s totals to see a boost down the stretch, but beyond him there may not be much hope for additional production from the current group of forwards during this campaign.

And given the team’s struggle to generate shots and inflated shooting percentage, that could mean the Blueshirts’ offense really dries up in the second half.

New York would still have enough firepower to win games consistently if the Rangers could keep the puck out of their own net, but this is no longer the high-flying offensive dynamo of a year ago.

Categorized: Forwards Stats To Chew On