Addressing the hole in the top-six forwards 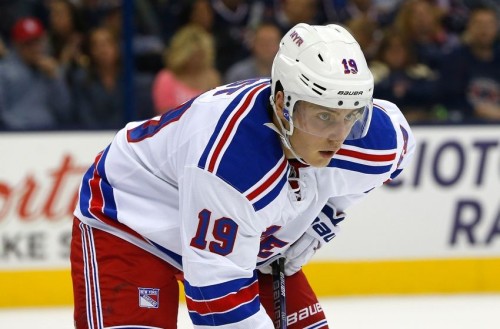 We’ve spent an incredible amount of time on the Rangers blue liners this season –from deployment to usage to ice time to lineup decisions– for good reason. There is a major issue there, but it is not the only issue plaguing this flawed club right now. Another major hole in the lineup is in the top-six forwards, where Jesper Fast continually plays, despite not having the appropriate skill set.

Don’t get me wrong, Fast is a solid player. He’s a great skater, solid defensively, and has a top-notch hockey IQ. But he’s not a scorer. The Rangers appear to lack that scorer in the top-six. Alain Vigneault has tried Fast, J.T. Miller, Kevin Hayes, and Oscar Lindberg at various times, and none have stuck. To be fair, none have really played consistently enough to warrant a permanent spot in the top-six.

When the season started it appeared to be a competition between Hayes and Miller, but both have struggled. Both have 17 points in 36 games though, which puts them on pace for about 39 points. That puts them both right in the middle of 2nd/3rd liners. Hayes has more skill, but he’s not the pure shooter the Rangers need in the top-six. There is certainly the argument that Hayes generates a ton of offense, and he does, but the way the team is currently constructed, he may not be the best answer today.

So the question then becomes: Do the Rangers need to address a hole at 2RW?

Since no one has been able to take a strangle hold on that position, I think the answer is an obvious “yes,” especially when you consider the lack of a pure shooter. None of Rick Nash, Chris Kreider, Derick Brassard, Mats Zuccarello, or Derek Stepan think shot first. Without that pure shooter we are left with too many fancy passes or players forced into roles that don’t fit them, like Fast.

The tough part is addressing that problem, since a problem is only a problem if you have a solution. Otherwise it’s just an observation. If the Canucks fall out of the race, someone like Radim Vrbata is someone that comes to mind. He has to be shoot-first since he plays with the Sedins. James van Riemsdyk comes to mind as well, but his cap hit is prohibitive given the Rangers cap situation.

The Rangers have a pretty large hole at 2RW, something that they hoped a kid would be able to fill with Martin St. Louis retiring. Limited cap space to address the issue compounds the situation. Fixing the blue line is an obvious priority, but finding a solution for 2RW is another hole that shouldn’t be overlooked.