How do you diagnose this mess? 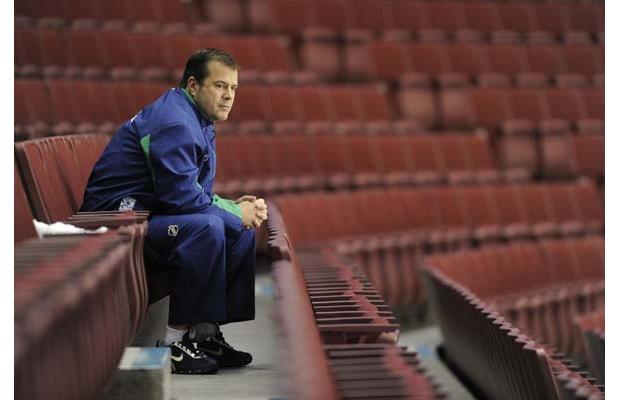 The Rangers are as big a defensive mess as they have been in well over a decade. It’s truly difficult to recall a sustained stretch of such defensive lapses on a game by game basis as this recent ‘run’. So how do you find the cause to the problems? Where do you begin to remedy the team’s ills? And how can this coach turn it around with little assets or depth to change the roster or practice time to go back to the drawing board?

Ironically, the problem isn’t the powerplay which is currently in a 5 for 21 stretch – not good enough to brag about but certainly not the problem. The problem also isn’t Henrik Lundqvist even if he has been pulled in two of his last four starts. We could go through this post listing a bunch of trends, statistics and/or players who have shown up on the box scores and suggest they’re doing their bit. However the fact is – other than stating the obvious and noting that the defense is a mess – the fix isn’t obvious either.

This is easily the biggest challenge Alain Vigneault has faced as the Head Coach of the New York Ranger. You can argue that the biggest challenge was trying to overcome a bigger, stronger, deeper LA Kings in the Stanley Cup final but that was bonus time – the Rangers were never favourites to beat the Kings and the better talent won that series. No, this is the biggest challenge facing Vigneault and there are legitimate reasons to doubt his ability to turn it around.

The Rangers have been guilty almost all season of lapses of concentration, positional errors, defensive breakdowns, failing to support their goaltenders and a general disregard to defensive play, yet nothing has changed all season – there has really been no obvious improvement. The mistakes keep mounting up, the pattern of play continues from one game to the next.

Alain Vigneault is a brilliant coach. You do not have his level of success or coach 1000 games in the NHL without doing a lot of things right. However is he being too loyal to several veterans? Is he sticking too rigidly to his system? Are there any changes he can make without asking for his General Manager, Jeff Gorton to make wholesale changes?

No one is expecting the injured players to come back and all of a sudden everything will be ok. After all, they have all been part of this season’s problems. There are no obvious fixes lying around in Hartford, no cap space to go out and get a legitimate upgrade with. Hey, there aren’t many spare draft picks lying around either. It’s difficult to see how Alain Vigneault can remedy this mess any time soon and that is why his job may soon come under threat.

There’s plenty of talent on the bench and behind the bench so there’s no reason to panic just yet. And yes, we’re still in December. But you’re a more knowledgeable fan than me if you can see an obvious cure for this team. Thankfully it’s Alain Vigneault coaching this team and not me. Let’s hope he finds a remedy.