It was a big night for the Rangers’ former first rounders as they reversed the result from their last meeting with the Oilers, beating them 4-2. The most notable stories could be found at the blue line, with Brady Skjei making his Rangers debut in place of the injured Dan Girardi, and Dylan McIlrath scoring his first NHL goal. Chris Kreider and JT Miller also had strong games, helping the Rangers forecheck regain some of the energy it had seemingly lost in previous mathchups. Overall the Rangers played markedly better hockey than we’ve seen from them lately, connecting on passes, playing a strong forechecking game, and getting some high quality scoring chances. While the Rangers found themselves on the penalty kill perhaps more than they would like and Edmonton pushed back somewhat late in the game, the Rangers stuck with it and have a lot to be proud of in their game tonight, especially on defense.

A nice cycling play up top leads to a goal for Mats Zuccarello. Boyle has the puck around the top of the cirlce and works it back up top to Rick Nash. Nash then passes it to Yandle, who’s moving along the blue line as Zuc is moving in the opposite direction. This creates a nice bit of space for Zuc, who receives the pass from Yandle and snaps the shot. A good team effort and some solid puck moving from the Rangers’ defensmen on the play leads to a goal.

The Oilers get one back around five minutes into the second on power play, with the Rangers giving offensive dynamo Taylor Hall just too much space to work with. Draisaitl passes to Purcell as he moves down the boards towards the goal line, with Purcell passing it right back to him as he draws the defense down and towards the boards with him. Draisaitl then passes it across to Hall as he’s bearing down the ice from the top of the circle, scoring as he moves in on Lundqvist.

Nothing too fancy to see here, just a great goal. Yandle puts on a nifty little move to lose the defenseman and then passes it across to Dylan McIlrath at the point. McIlrath rips a massive slap shot and hits the net for his first NHL goal.

Not the best moment of Brady Skjei’s debut, but these things are bound to happen no matter who’s playing the puck. A bad giveaway leads to a breakaway pass for Jordan Eberle from Ryan Nugent-Hopkins. Eberle has both defenders beat here and then goes one on one with Henrik Lundqvist, putting it home for the Oilers’ second tying goal of the evening.

A power play goal late in the second gives the Rangers the edge that they would eventually take to victory. Picking up the rebound from an outside shot along the half boards, Mats Zuccarello pulls back towards the blue line, creating a nice passing lane, before putting it down low to Rick Nash camped out just to the side of the goal. Nash then turns and puts it towards the net, whacking at his own rebound for the goal. This one was huge in terms of giving the Rangers back the momentum heading into the third.

With the Oilers having pulled their goalie late in the third period the Rangers did their best to stifle any offensive chances, with the pressure from the Rangers moving the play back towards Edmonton’s own end. Dom Moore takes the initial shot here but it’s blocked, with Jesper Fast getting his rebound for the empty net goal. 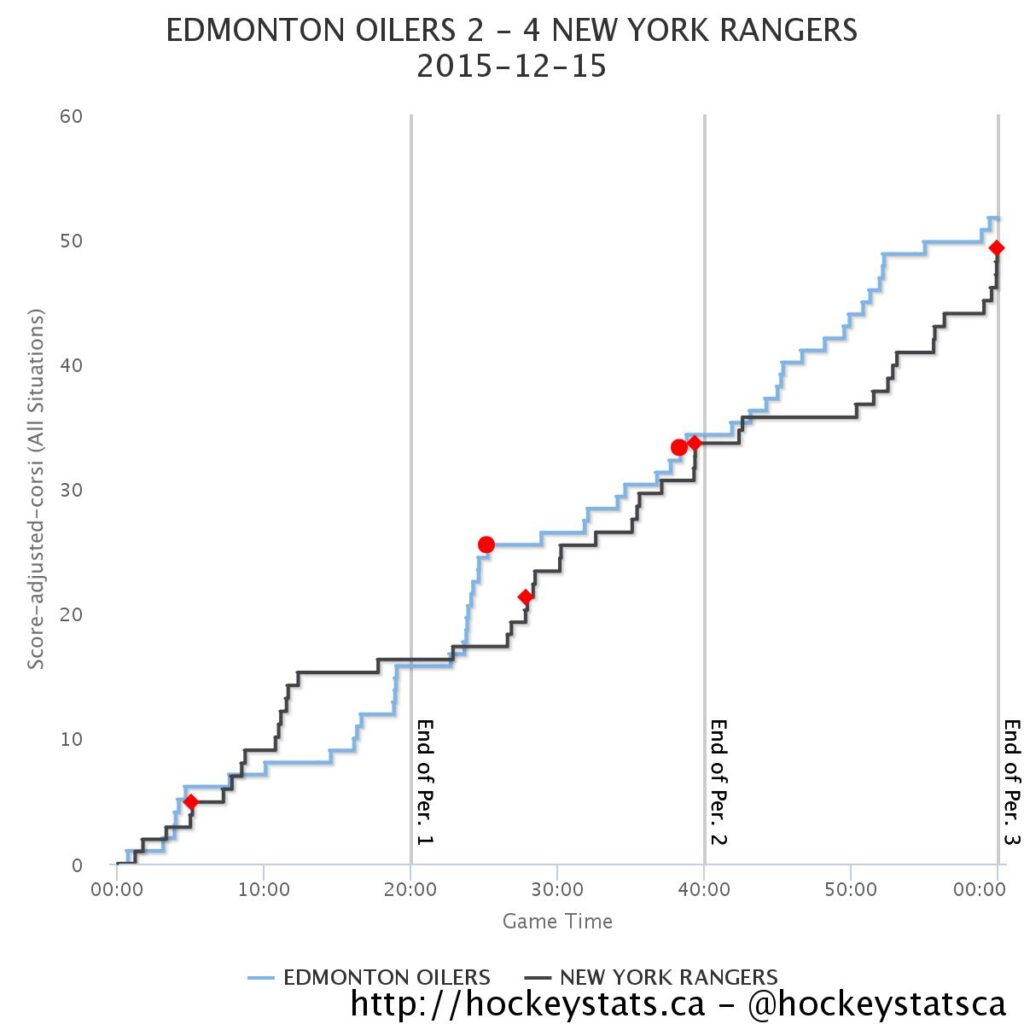 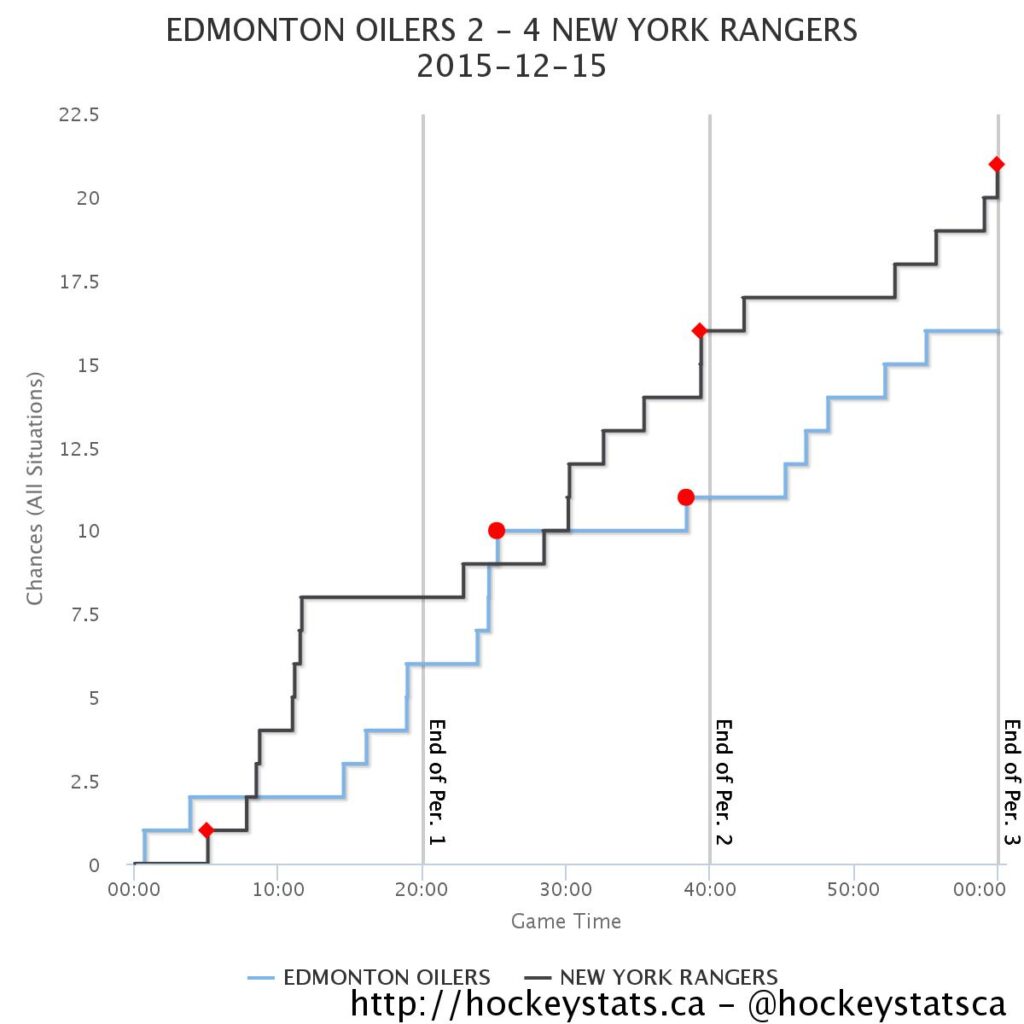 If you thought just from watching that the Rangers played a much better game than they have recently, these charts verify that. On the left we have score adjusted shot attempts, where we can see the Rangers and Oilers played a pretty close possession game, with the Oilers laying on a little extra pressure in the third period. However, the Ranger had the lead almost the entire night in terms of scoring chances, even if the overall flow of the game fluctuated. Really positive stuff here from the Rangers, especially given the kind of defense we’ve seen from the team in the recent past. 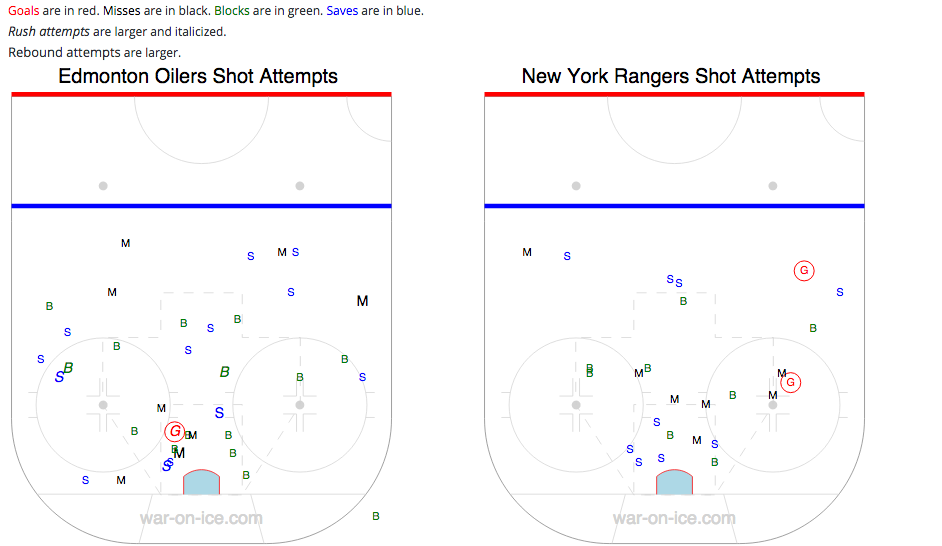 Here we can see another indication that the Rangers played a bette all around game – the Oilers’ shot locations tended more towards the outside, with the Rangers’ being clustered closer to the net. 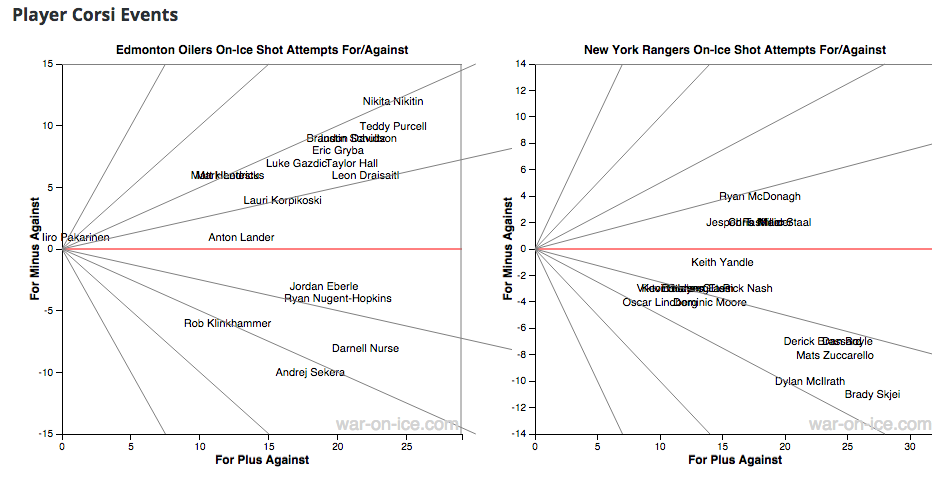 While this chart might not seem to indicate great things from the Rangers this game, it’s worth noting that in terms of process they were much better. They seemed vastly improved in terms of zone exits and entries, making crisp passes, and stifling the Oilers’ offensive chances, so maybe take this one with a grain of salt.

Although it’s a relatively unimportant December hockey game, digging beneath the surface shows how big of a game this was for the Rangers. First of all this was a big win after a tough road trip and series of poor defensive performances stretching several games back beyond that. Second, this was a big night for two prominent rookie defensemen, with McIlrath scoring his first career goal on an absolute blast and both him and Brady Skjei showing overall poise and composure on and off the puck. Finally, this game was significant because it showed that the Rangers can in fact win games by playing cohesive, balanced hockey. The forecheck had more jump tonight, they were connecting on passes, and overall made it tough for Edmonton to get much going. While it’s only December, this was about as big of a game as we’ve seen these past few weeks, and the Rangers came out on top.