The case to trade for Ryan Murphy 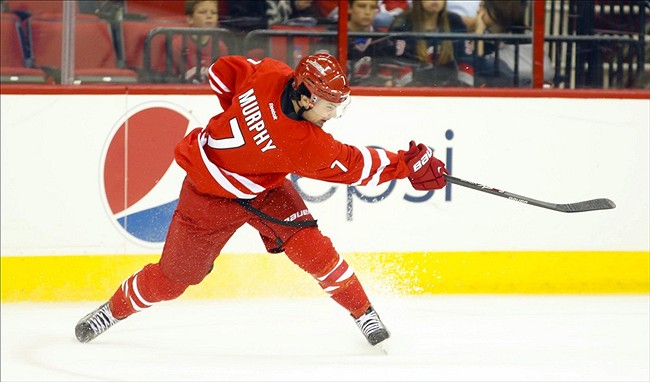 As the season progresses, trends outside of New York start to get noticed that may present opportunities for the Rangers to improve their team. One such opportunity is with Ryan Murphy of the Carolina Hurricanes. The former 12th overall pick has been yo-yo’d a lot by the Canes, and it appears they could pursue a trade. They have blue line depth in the system, and in what may be a purge at the deadline, a change of scenery for Murphy can help address their forward depth.

The thought of a potential Murphy trade came from a few thoughts going through my head over the past few days, both subjective and objective.

I’ll admit it, I am jealous of the New York Islanders. It pains me that they were able to acquire a top defenseman in Nick Leddy for –no disrespect to Ville Pokka, a good prospect– for scraps. The story behind Leddy is simple, former first round pick who was traded to Chicago in another lopsided trade, but was behind the depth chart with guys like Duncan Keith, Brent Seabrook, Nick Hjalmarsson and Johnny Oduya. His talent of course was undeniable and his play led many to believe that he was severely under utilized in Chicago. The Isles swooped in with a wise move to take a player who had no opportunity of climbing up for greater responsibility. Leddy signed a lengthy extension last spring with them to be a foundational piece for that team moving forward.

This is a philosophy that I hope the Rangers adapt consistently: Buy-low on young talent, give him the opportunity to succeed, and let him run with it (Benoit Pouliot as a loose example). In today’s NHL, teams need to constantly improve with younger, more cost effective talent. Now this isn’t advocating making a move for the sake of making a move, I just personally feel that to remain a competitive franchise we must have a “revolving door” which includes talented young players who must be able to fill a role and run with it.

The Rangers have an issue on defense. A truly efficient team must be able to move the play up the ice to start the breakout. It is absolutely imperative to be able to skate well in the modern NHL and significantly reduce the amount of time spent in the defensive zone, which assists in easy breakouts. The Rangers have two solid pieces that can do this with Ryan McDonagh and Keith Yandle. But that is not good enough for a team with Stanley Cup aspirations.

The Rangers, unfortunately, lack prospect depth to fill this area of need. Other than Brady Skjei, I am hard pressed to name one other prospect who is ready for the NHL, at least in the foreseeable future. Calle Andersson has his flaws, but can become a nice puck mover in the NHL but he is a project. Ryan Graves is solid but will need more time, plus he is a lefty, which slots him behind Skjei and re-signing Yandle. We then have Ryan Mantha and Sergey Zborovskiy who are both long term projects.

The Hurricanes are a quality possession team with a great coach and will be dangerous once they get more skill at forward. Their strength is their defensive depth, which includes Justin Faulk, Noah Hanifin, Brett Pesce, Haydn Fleury, and Roland McKeown. They have depth guys in Jacob Slavin, Josh Wesley, and Keegan Lowe as well. Murphy, though, was just sent to the minors, likely to keep room for  Hanifin and Pesce.

In looking at a potential deal for Murpy, one thing Carolina lacks is a talented winger. They are tied for 27th in the league in Goals For and while they do have a nice little group of forward prospects, they can use someone now.

Point 4: The Mishandling of Emerson Etem

Alain Vigneault hasn’t handled Etem properly. Asset management is critical in the NHL, and keeping a young player on the bench who has played well isn’t proper asset management. It is pretty crazy that he is on the bench when he is playing better than two guys who are currently in the lineup.  The Rangers wanted a young forward who can produce and become a scorer in exchange for their proven asset in Carl Hagelin. Etem is being set up to fail. AV likes to use Jarret Stoll. AV likes to use Tanner Glass. He feels that those are parts of the lineup that would bring upon success. Whether I agree with him or not it doesn’t matter.

So Why Ryan Murphy?

Carolina needs some talent up front, and has defense depth to give. The Rangers need some reliable defensive depth both now and in the future, and have forward depth to give. Seems like a perfect match.

Etem can’t be returned to Hartford for playing time, since he would need to pass through waivers. Murphy doesn’t have that problem, and the Rangers can have him spend time in the AHL. Etem would probably slide right into Carolina’s starting lineup. It makes sense, on paper for both teams in the present and the future.

At his current contract Ryan Murphy was a super efficient defenseman for the Hurricanes last season: 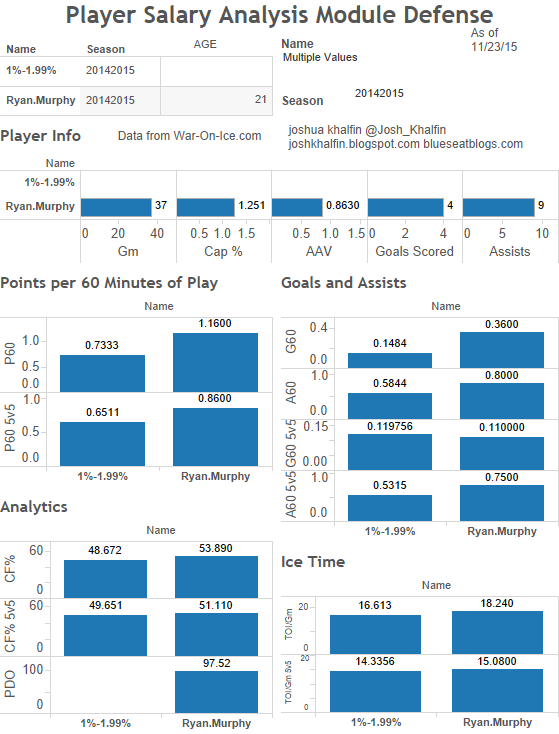 For the sake of making a point, here is Murphy’s PSAM to other contracts as well including 3%-3.99%, roughly $2.8 million. 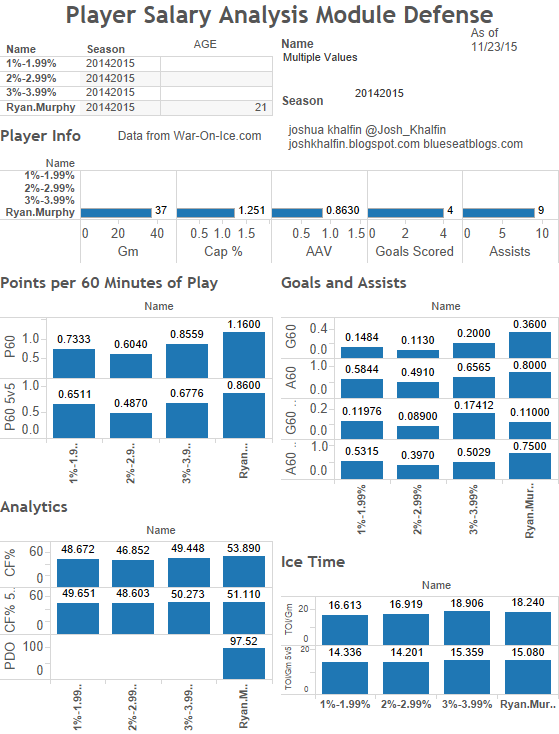 Based on this, Murphy is actually worth more than $2.8 million for his production. If the Rangers do get him and sign him to a cheap bridge deal, they essentially have a player that can produce at least $2.8 million dollars worth of points for about one-third of the price. Seems pretty logical to me. 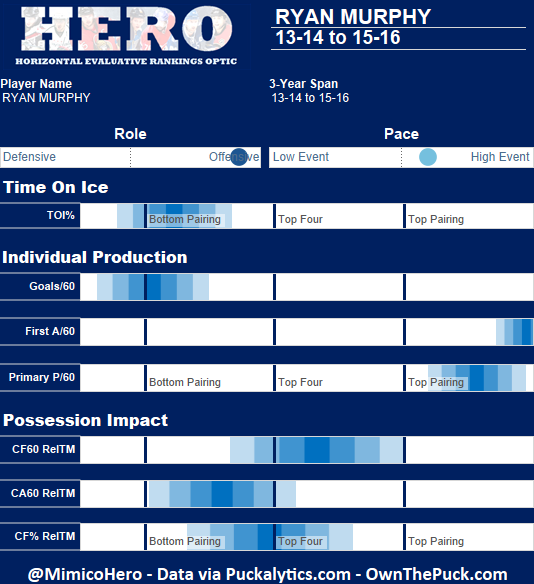 For comparison’s sake, here is Leddy’s HERO chart. Given their respective career paths, it seems logical that Murphy is capable of taking the next step, like Leddy, if given the opportunity. 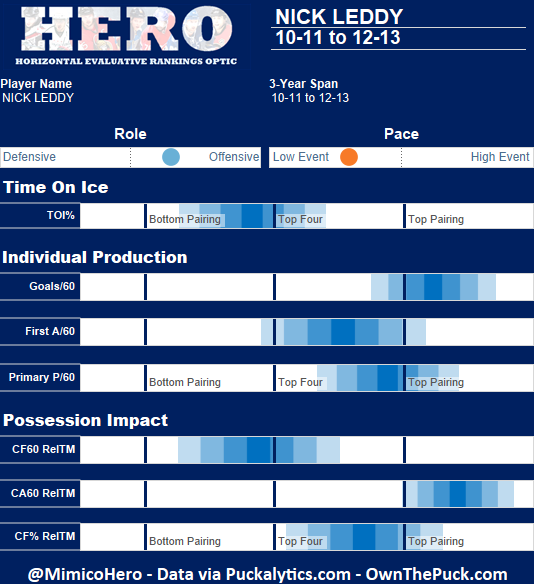 On paper, an Etem/Murphy swap makes logical sense. For the Rangers, it would give them a much needed right-handed puck mover, something they will lack once Dan Boyle retires. The major stepping stone here, aside from a rare in-division trade, is recognition from the Rangers that the blue line needs addressing. If that realization is made, then the Canes make solid trading partners.