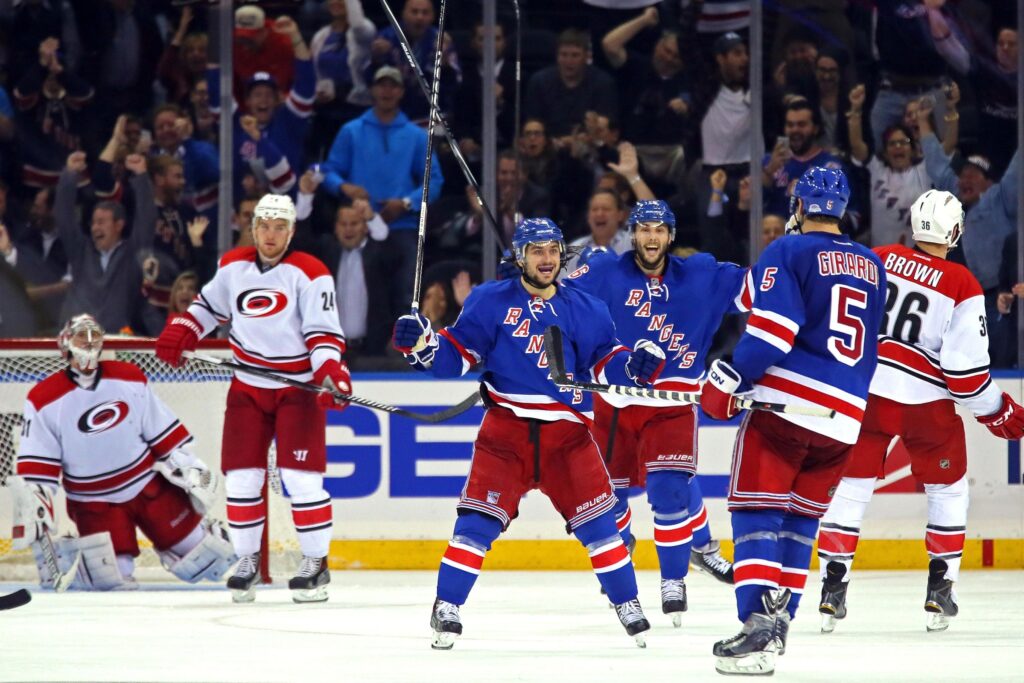 The Rangers broke their three game losing streak with a 4-3 win over Carolina at home, despite a relatively sloppy performance. While they came out on top it’s hard to say any individual Ranger player had a particularly positive game, with only Derick Brassard post a positive shot attempts +/- for the night. Across the board the Rangers had a hard time getting out of their own zone or connecting on passes, giving up 75 shot attempts and 36 shots on goal to Carolina in 60 minutes. It was the kind of win where you’re just happy they got the two points, but hopefully they tighten up their game in the future as this kind of win is likely to be unsustainable.

On a power play early in the game the Rangers win the face off and the puck kicks back into the high slot, where Mats Zuccarello jumps at it and snaps the shot  before Cam Ward can get set.

Rangers 2 Hurricanes 0
A second power play goal for the Rangers, this time late in the first period. Following an outside shot from Dan Boyle, Kevin Hayes recovers the puck along the boards and works it back to the point where it’s played by Keith Yandle. Yandle then plays it over back to Boyle, who passes it to Lindberg in the slot instead of taking the same shot again. Lindberg rips the one timer and the Rangers gain a 2-0 lead to close out the first.
Rangers 2 Hurricanes 1
Nestrasil enters the zone coming down the wing and gets the puck deep where it’s fought for unsuccessfully by the Rangers. The puck then comes back around for Nestrasil coming through the slot, who centers it, with Jordan Staal getting the tip in on an easy goal in front for Carolina.
Rangers 3 Hurricanes 1
Chris Kreider works the puck in deep where it’s fought for along the boards by Jesper Fast. Coming in to provide some support for Fast, the puck is kicked back out to Kreider, who turns and shoots from just above the goal line, hitting the net. Cam Ward was visibly frustrated on this one.
Rangers 4 Hurricanes 1
Jesper Fast clears the puck at the end of the penalty kill, with Cam Ward playing it back at the other end. The puck is intercepted by Kevin Hayes coming out of the box, who shows great decision making to play it over to Derick Brassard. Brassard rips this one home, putting the Rangers up 4-1.
Rangers 4 Hurricanes 2
This is one Henrik probably wants back. Following some play down in Carolina’s end, the puck is cleared out to the neutral zone where it’s scooped up by Lindholm coming down the middle. He passes the puck over to Victor Rask coming down the wing, who snaps a quick shot and beats Lundqvist cleanly from the top of the circle.
Rangers 4 Hurricanes 3
On a brilliant outlet pass Jeff Skinner catches Chris Terry coming off the bench breaking in. Terry, having beaten both Rangers defenders, puts a quick move on Lundqvist and slots it home for the Hurricanes’ third goal of the night.
Score Adjusted Shot Attempts 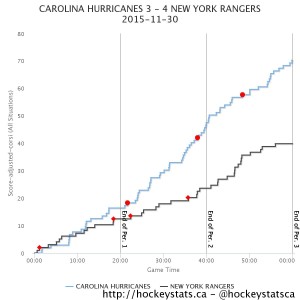 The above chart is the kind of thing that makes some people (myself included) question the process by which this Rangers team is winning games and whether or not this kind of play is sustainable. The Rangers had a solid start to the first and then began giving up some momentum, with the Hurricanes gaining a much bigger proportion of the offense of the game during the second period, especially towards the end of the frame. The third period was slightly better for the Rangers, but Carolina still held onto the lead in shot attempts.
Scoring Chances 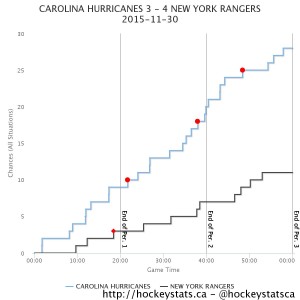 Here again we see more worrying evidence in terms of process. The Rangers did not keep up with the Hurricanes in terms of scoring chances, and while the Rangers led in goals, it’s a little concerning that they were this behind in scoring opportunities.
Shot Location 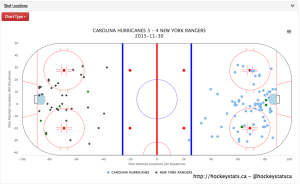 Even more concerning than the last two charts, which displayed the Rangers deficiency this game in terms of both shot attempts and scoring chances, is this chart displaying both teams’ shot locations. As we can see the Rangers took relatively few of their shots in that critical slot area, while Carolina attempted a large amount of shots directly in front of the Rangers net. These are high danger scoring chances that the Rangers can’t be giving up if they want to sustain their success.
Individual Corsi

This is perhaps the most damning chart we see with regards to the Rangers game against Carolina because as we can see, despite winning only one Ranger, Derick Brassard, was positive tonight in possession. This stands in stark contrast to Carolina’s players, all of whom displayed positive Corsi differentials on the evening.
So to sum it up despite maintaining a lead all game and scoring some sensational goals the Rangers’ play against Carolina left a lot to be desired. The team struggled to exit their zone and connect on passes, were badly outshot, and had to rely on two power play goals to establish their lead. It’s one thing to celebrate getting two points and snapping a losing streak, but it’s worthwhile to question the teams process of getting these kinds of wins and whether or not it’s sustainable. Hopefully they can tighten up their game for Wednesday’s visit to the Barclays Center, where they’ll play a competitive New York Islanders team.