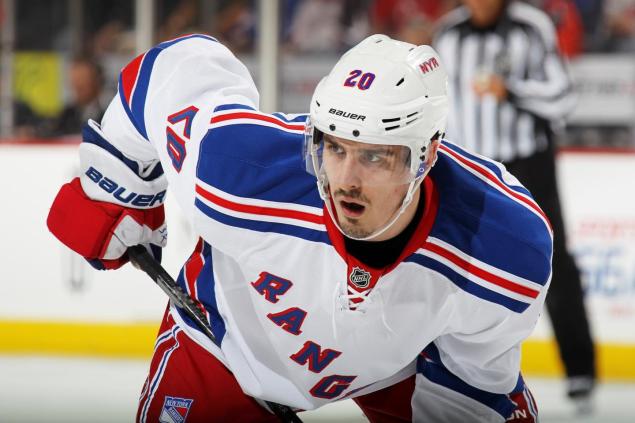 New York Rangers’ general manager Jeff Gorton must be watching his team win game after game to start the new season while wondering what he’s done to deserve such luck. Why luck? The Rangers are likely headed toward a tough offseason with several young, but key, roster players due new contracts. The lucky part for Gorton right now, is that none of those players are making a strong case for (key word) significant pay rises.

As we enter mid-November, Chris Kreider, Kevin Hayes, J.T. Miller, Emerson Etem and veteran defenseman Keith Yandle are all approaching next summer with their future’s unclear. Particularly in the cases of Kreider, Hayes and Yandle all three should be significant parts of the Rangers future. Kreider is the power forward, goalscorer in waiting, Hayes has quickly become an integral and flexible part of the top nine while Yandle is the best puck mover the Rangers can turn to.

The thing is, not one of the above group of players is demanding a huge pay rise through their current play. Kreider continues to struggle with his consistency and if anything, has taken a step back offensively this season. Hayes continues to flash brilliance and elite puck handling skills but hasn’t yet determined one settled position or – like Kreider – established the type of consistency to warrant a strong negotiating position. Yandle, on the other hand hasn’t been as advertised, even if he too has flashed his obvious and elite level skill.

Unfortunately (?) the fact is that Kreider, Hayes and Yandle will all get “healthy” new terms of employment almost regardless of how they play out this season. Combine youth, potential upside and hard to find skill-sets in the modern day, cap era NHL and as a player you almost get what you want regardless of whether you’ve earned it. It’s a seller’s market right now and has been for a generation.

There are plenty of examples in the league right now where teams have paid for upside rather than for current production – Nick Bjugstad of Florida is perhaps one of the best current examples. A fine talent for sure, but Bjugstad hasn’t earned a six year $24million dollar contract which is what he got last summer. Apparently a career high of 43 points on a losing team is worth 24m dollars. Florida paid handsomely for the promise of more to come from a big, young and skilled forward and the Rangers will do the same with Kreider and Hayes. It’s inevitable.

With that said, Kreider and Hayes are not making Jeff Gorton’s job as hard as they could. In particular Kreider. Entering the season, Gorton would have been nervous at the thought of Kreider potting a 30+ goal season (which absolutely could still happen) during a contract year. Kreider would be looking at a bare minimum of $5m per year on a long term deal if he bags 30 plus goals. Indeed, $6m is much more realistic with a rising cap and – from a team’s perspective – an ever dwindling free agent pool to replenish from. There are not many players with Kreider’s size, speed, skill and youth available anywhere. He could almost write a blank cheque.

Throw in Etem (the talented but yet to stick in the line-up winger) and Miller (another who has taken a long time to carve out a defined role with the Rangers and who also still lacks consistency) and the Rangers have a handful of young players approaching contract time, none of which are forcing Gorton’s hand.

Yandle, the veteran blueliner is in a slightly different scenario. He’s going to get paid regardless where the cheque comes from. The difference is he’s not making the Rangers offer his agent a blank cheque with his play. Given his skill-set there is every chance the Rangers will want to retain him but right now there’s a chance Yandle might make the open market. He’s not made himself indispensable with his play. Luckily for Yandle, the market for quality puck moving defenders is historically weak right now but if Yandle wants to get a significant pay rise, he may have to settle for (another) hockey backwater rather than a competitive location such as New York.

There’s still the vast majority of the season to play so it’s obviously very early to consider the contract fallout for the aforementioned players but right now Jeff Gorton has to be smiling. He’s watching his team win, and not having to stress too much about upcoming contract season. Not a bad position to be in for the first year General Manager.