Boy was this game fun in the third period. The Blue Jackets are a tough, physical team, and this game had that feel to it early on. There were hits, there were penalties, there were borderline hits that went uncalled, and there were tempers flaring. But at the end of two periods, it was still 1-1. It wasn’t until the worst rule in hockey (puck over the glass) reared its ugly head that actual scoring took place.

The Rangers, down 2-1 late because of the penalty, scored three times in 1:17 late in the third to seal the deal. J.T. Miller and Oscar Lindberg combined to tie the game. Then Kevin Hayes caught Sergei Bobrovsky sleeping. Then Mats Zuccarello sealed it with his second of the game. It was so fast, I had trouble keeping up with the gifs.

As always, you can view the full videos on our video page here. All GIFs are on nyrgifs.com,filtered under yesterday’s date. On to the goals:

Mats Zuccarello and Dominic Moore were in on the forecheck to overwhelm the Jackets, specifically David Savard and Gregory Campbell. They forced the turnover to Zucc in slot, who put a nifty backhand over Sergei Bobrovsky’s blocker short side.

There’s a lot on this goal. It looks like a simply mishandling of the puck by Derick Brassard, and that is certainly the major contributing factor. However Keith Yandle is skating to the zone, thinking the Rangers will keep possession, so he’s trapped. Cam Atkinson is behind Dan Girardi, who is also assuming retained possession and just got on the ice. Once Brass lost the puck and Brandon Dubinsky recovered, he made a perfect pass to Atkinson, who deked Henrik Lundqvist out of his pads.

The worst rule in the history of hockey struck again, as Ryan McDonagh cleared the puck over the glass. The Blue Jackets went to work, and well, there’s not much the PK can do here. They played it well. Saad got the puck at a danger zone, Nick Foligno was in front, and he had a clear shot over Hank’s blocker.

The CBJ defense is not that good. I said it in the preview, and I meant it. J.T. Miller pressured Kevin Connauton into a turnover, as he whacked the clear out of midair. Oscar Lindberg collected the puck off the boards and just beat Bobrovsky blocker side.

Bobrovsky was just sleeping on this play. This is a goal that shouldn’t happen.

A strong forecheck from Brassard and Rick Nash set this goal up, as the pressure forced Jack Johnson to kick the puck out of the corner, right to Zucc. Zucc collected it and beat Bobrovsky high blocker.

Safe to say that CBJ dominated the possession game here. Even when accounting for score effects, the Blue Jackets really took it to the Rangers in terms of shot attempts. But single game samples are more or less a weighted coin flip, and mental mistakes matter. The Rangers scored three times in 1:17 late. Those are mental mistakes. 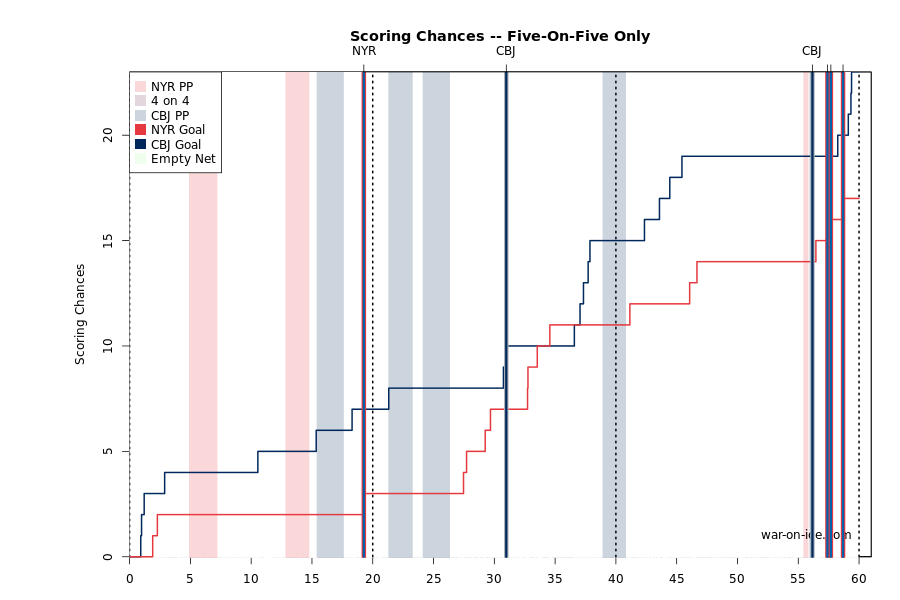 As expected, CBJ dominated the scoring chances too. These chances are at even strength, but it’s worth noting that the Rangers did a good job flatlining the Jackets in the third. Of course, the Rangers appeared dead in the first. That’s almost the entire period without a quality chance. 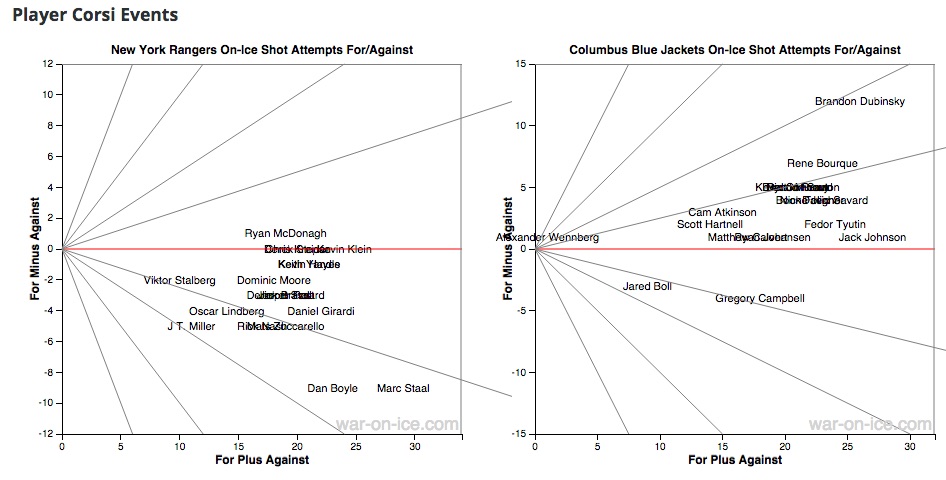 Again, single game sample are tough, but this matches with the score-adjusted Corsi chart above. Only McDonagh was in the positives for relative shot attempts. But this still only indicates a weighted coin flip advantage. If this becomes the norm, then it becomes an issue. But for one game, it is what it is. 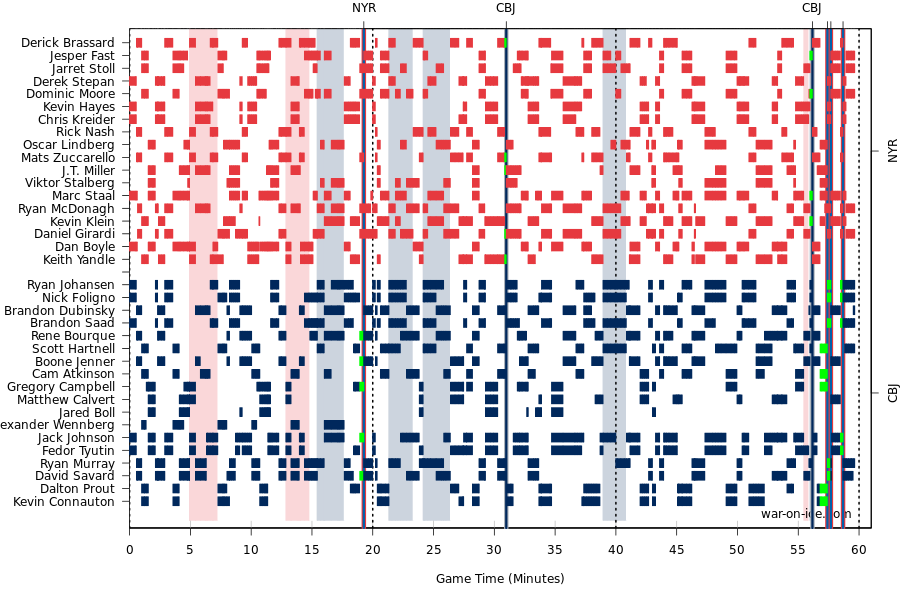 This is nice to see. No one got shut down in the third. This is something the Rangers didn’t have last year. They can play all four lines late in the game. 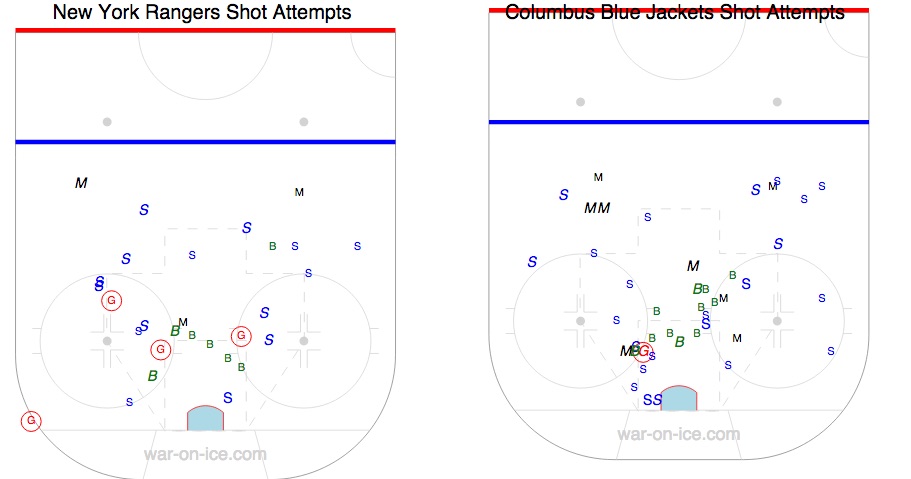 This is consistent with both Corsi charts above. CBJ just had more shot attempts. A lot came from inside a danger zone too. But the Rangers got the two points.

The Rangers have the tail-end of the home-and-home with Columbus tomorrow night in their home opener. They have opened the season 2-0 with a solid win in Chicago and a gutty win in Columbus. Both are playoff teams. Can’t ask for a better start to the season.