Where does Kevin Klein stand now? 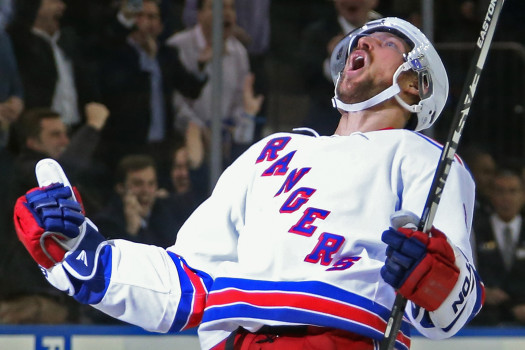 Klein’s spot may be in jeopardy

Much was made yesterday of Alain Vigneault’s decision to dress defenseman Kevin Klein back-to-back nights this week given the developing competition for the final spots on the blueline in training camp.

On the one hand, Klein only dressed Monday because Dan Boyle was a last minute scratch, so perhaps some are reading into it too much. However, there were many other players Vigneault could switched with Klein last night, but he still chose to play the 30-year-old veteran again.

Despite Klein’s struggles late last season, it was still widely assumed that the final spot on the bottom pairing was all his entering training camp, but there are a few other things to consider.

First, Vigneault has made no secret of his desire for Dylan McIlrath and Oscar Lindberg to force Vigneault to make tough decisions with final cuts. Obviously McIlrath is perilously close to bust status, but the organization desperately wants him to succeed. And this really may be his final chance, since McIlrath would be subject to waivers if he were assigned to Hartford.

Then there’s the omnipresent cap crunch. Any way you slice it, the Blueshirts will be right up against the cap ceiling this year. Dealing Klein now would give them the flexibility to carry multiple spare players – Vigneault’s stated preference – and acquire a missing piece or two during the season. And whether it’s now or next summer, Klein’s contract is coming off the books before the start of next season because GM Jeff Gorton will need his money to re-sign Keith Yandle.

So with that in mind, there are a few ways this could play out:

Klein stays at 6D, Diaz as 7D – This remains the most likely scenario. But unless the Rangers can really get creative with the salary cap and keep McIlrath as a second extra blueliner, it would likely mean the end of his career with the organization. In this scenario Brady Skjei would begin the season with the Wolf Pack, but he could be called up mid-year a la Ryan McDonagh, in which case Klein could still be traded in a few months.

Klein at 6D, McIlrath as 7D – It would be difficult to make the still growing McIlrath a healthy scratch over and over, but this is one way to keep him off waivers and see how things progress. Diaz is far from irreplaceable, but it might be possible to keep him around since he’s not as much of a claim risk. This would allow the Blueshirts to either commit to Klein, or trade him when they’re eventually ready to cede the job to McIlrath or Skjei.

McIlrath as 6D, Klein or Diaz as 7D – McIlrath is going to have to really step up his game for this to happen, but it remains possible. The Rangers would obviously avoid subjecting McIlrath to waivers here, but if they give the job to him outright, then they’d probably deal Klein for cap savings and trust Diaz and/or PTO Brett Bellemore as extra depth options.

Diaz as 6D, McIlrath as 7D, Klein traded – The staunch believers that Diaz is underrated will love this option, and it’s an interesting solution. Diaz is a better puck possession player than Klein and a better distributor, so he is a solid match for Vigneault’s style. This would provide the Rangers with immediate cap relief and buy them a little more time with McIlrath, who could serve in a platoon with Diaz until he wins the job for good, or doesn’t. It also clears the way for Skjei to step into a full-time role when he’s ready.

Skjei makes the team – This is looking extremely unlikely out of the gate due to the aforementioned complications. It might be best for Skjei’s development if he gets a bit more seasoning anyway, but he’d to have to blow the Blueshirts away to leapfrog the other players. And if Skjei does make the team, it’s going to be as an everyday player, because it makes no sense to have him watch from the press box rather than play 25 minutes a night in Hartford. If Skjei does force the Rangers’ hand, it would probably spell the end for McIlrath, because it’s pretty unlikely Vigneault would want two rookies as his options on the bottom pairing. Klein or Diaz would be the 7D.

McIlrath has impressed in the early going while Klein and Diaz have had difficult preseason performances. And with Skjei starting behind, this might be a wide open battle.

How do you think the D will play out?