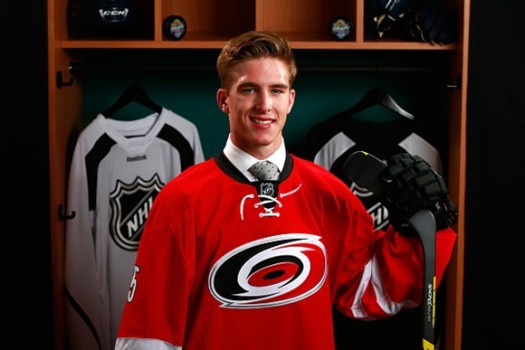 Offense: The Staal brothers are still serviceable players, but they are no longer stars capable of carrying an offense. The present and future lies with junior Elias Lindholm and 23-year-old Jeff Skinner, whose quick rise has been thwarted by a myriad of injuries.  Lindholm, Skinner and Eric Staal are really the only players that should even be sniffing top-six roles on a decent club. There are few players with upside like Victor Rask, but for the most part Carolina’s anemic attack is comprised of recycled parts.

Defense: Is Lack really an upgrade over Khudobin? At least he should get a bit more help, with No. 5 pick Hanifin joining Justin Faulk as long-term pillars along the blueline. With Haydn Fleury also on the way, the ‘Canes defense could turn a corner quickly especially if Ryan Murphy becomes a real contributor. Wisniewski will be an upgrade over anyone Carolina had last year other than Faulk and trade deadline casualty Andrej Sekera, but essentially giving up a needed third-round pick to acquire him and switch from Khudobin to Lack seems a little strange for a team with no real hope of competing in the near future. Still, Carolina has assembled a few pieces on defense that could turn this unit into a strength in short order.

Franchise direction: The ‘Canes are well past the point when they should have blown up their roster. There are few veterans left of any value, with the Staals’ values decreasing with each hit. Wisniewski is an attractive trade chip, but beyond that it’s slim pickings. Carolina could choose to cut bait with Skinner in hopes of landing more young pieces, but they’d be risking replacing quality with quantity. Even the most optimistic members of Carolina’s front office have to realize that the club’s roster is miles away from being competitive and far worse than every other division rival with the possible exception of the Devils. It’s hard to see what the vision is here.