Around the league and Rangers prospect news 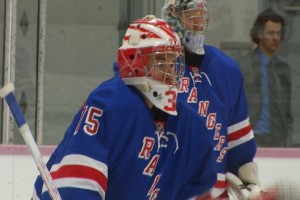 Its Thursday so time for another dose of around the league, with some Rangers thoughts scattered in for good measure. While we have some hockey back on tap (rejoice!) the dog days are clearly here.

In news that will surprise absolutely no one, the NHL ‘invited’ both Las Vegas and Quebec to participate in the second round of the expansion application process. Of course, given the non refundable bonds put up to begin the process this is really just a formality and both groups were always going to enter this round.

In discussing the NHL’s ‘Stadium Series’, commissioner Gary Bettman went on record on Wednesday stating that outdoor games are ‘far from being overdone’. I hate to agree with Monsieur Gary, but I do. Having travelled from the UK to go to the Rangers Devils matchup at Yankee Stadium, the games are a unique experience and are a great inclusion on the long NHL schedules. What do you think?

Not a bargain: The Canucks felt inclined to give newly acquired Brandon Sutter 4.375m per year for half a decade. Sutter is a solid defensive center with some skill but with a career high 40 points (back in 2010 no less) his agent has done him proud. Deals such as this one make the Derick Brassard deal look better all the time. 55-60 points per year and a proven playoff performer for 5m? Sign me up.

Bargain: On the flip side, Ottawa won their arbitration case against winger Mike Hoffman hands down. Even if his body of work is indeed light, Hoffman came out of nowhere to have a 27 goal season last year, including being 7th overall in the entire league in even strength scoring. Without Hoffman, the Sens don’t make the playoffs. Hoffman was looking for 3.4m. His situation will be worth monitoring this the season.

For those of you that care about such things: the NHL announced it has formed a digital rights partnership with Major League Baseball Advanced Media. Read about it here.

Jonathan Bernier got paid by the Leafs. Inking a two year deal for 8.3m, this came after a naughty lowball arbitration valuation submitted by the Leafs. If Bernier develops and the Leafs finally play some ‘D’ (they should be improved next year) this could turn into a solid deal for the Toronto club.

Prospect Update: We know you love some prospect news. World junior evaluation camps have been progressing over the past week or so. It’s some real hockey in the dog days of the summer and Rangers’ prospects have been making some noise.

Brandon Halverson had a solid game against Finland on Wednesday, stopping 32 of 36 shots and making several key saves on the penalty kill as the US team edged Finland 5-4. Halverson had previously played well against Sweden earlier in the week.

I keep reading the Rangers are in win-now mode and the future is bleak – beyond the short term. Yes, they’re in win-now mode but why is the future bleak? Ten players on the current roster are 27 or under. That doesn’t include the likes of Henrik Lundqvist, Rick Nash, Keith Yandle and Marc Staal, all of whom are still absolutely front line NHL players. This topic is worth a post/rant in its own right but the key message here is that the roster is full of quality young players already established in the NHL. Prospect development is obviously important but people too often lose sight of the state and upside of the current NHL product.