Thoughts from around the league 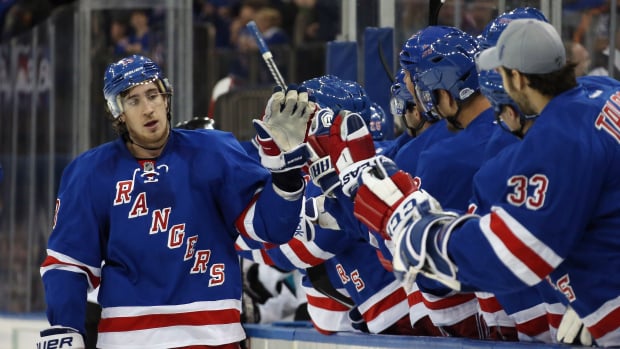 Will Kevin Hayes be celebrating as much next year?

In addition to checking on the teams in the Metropolitan we’re going to take a look at general league goings on as we’re in the middle of hockey summer and as we eventually approach the pre-season. So, without further delay…

Starting with some Rangers stuff (hey, we’re a Ranger blog after all). Having looked at the shooting percentages, Kevin Hayes (15.3%) will be an interesting follow next year as his shooting % is surely unsustainable. Offensively Hayes finished the regular season on fire but can he repeat his numbers, can he kick on offensively or, given a likely shooting percentage regression, will his numbers take a dip?

Bernier lowballed by the Leafs.

Even during an offseason where the Leafs did so much right (some solid hires, a decent free agency, moving Kessel, grabbing Mitch Marner etc.) they manage to dumfound at least once. If the hiring of Lou Lamoriello wasn’t confusing enough, the decision to offer Jon Bernier the minimum allowed in arbitration is shocking. On a genuinely bad team Bernier was solid last year (.912S%, 21 wins). He hasn’t become the goalie many anticipated (yet) but Toronto’s treatment of their best goaltending asset doesn’t make much sense.

Bruins and Habs to meet in Winter Classic

Well, maybe Tom Brady can sit rinkside on New Year’s Day if he’s not playing football? The Bruins and Canadiens will face off on January first at Gillette Stadium in an original six outdoor classic. The Bruins become the first team to host the event twice (well done, Mr Jacobs) and the league continues to keep the outdoor focus in the Northeast, rightly or wrongly.

Prediction Time I: Marc Staal will score 20 points next season despite the presence of McDonagh, Yandle and Boyle.

Brandon Sutter to the Canucks, Pens continue to retool

Do the Penguins continue to operate under a different cap to the rest of the league? It appears to me they’re in constant buying mode. Anyway, clearly intent on loading up for a run, the Pens grabbed Eric Fehr on a solid 3 year, 6m deal and sent Brandon Sutter and a 3rd rd. pick to the Canucks for Nick Bonino, Adam Clendening and a 2nd. The Pens win this deal because they added depth in Bonino and Fehr. They moved out some cap while getting the better of the picks in the trade and they would never have been able to afford to retain Sutter in a year’s time anyway. Solid asset management. One thing is for sure, the Pens are going to score a lot of goals next summer. Can they stop them?

Chris Kreider averaged a little above two shots per game last season with 2.25 per game. He had 180 shots in 80 games. With Kreider surely assuming a larger role next year, there’s a real opportunity for a huge breakout season. Jeff Gorton would be well advised to get a new deal done sooner rather than later as Kreider could get very expensive very quickly.

For those of you that are pining for some Cam Talbot, check out the TSN link here on CT discussing learning from the great Henrik Lundqvist as well as joining Edmonton.

The Devils are buying out Dainius Zubrus. Zubrus, who seemingly has been around since time began (19 years so, not far off) is a marginal NHL’er at this stage of his career and it was a move the Devils had to make. They desperately need a re-boot. How old is Zubrus? The last team he played for before he entered the NHL was the Pembroke Lumber Kings, in the CJHL. Exactly…

Two contract signings of note this week saw the Flyers’ Sean Couturier sign up for another six years and 26m while Colin Wilson and the Preds agreed on a four year pact for a shade under 4m per. Couturier hasn’t become the offensive force people expected but he’s a solid defensive center that started to emerge offensively last year.

Wilson has also been a slow grower but with 20 goals for the first time last year, Wilson is slowly getting to the kind of numbers expected of a top ten draft pick. These two signings continue the league trend of teams’ committing more up front and earlier than ever before to players and paying less for production and more for upside.

One rising star from last year was Ottawa’s Mike Hoffman who potted 27 goals and had 48 points in a fine rookie year. He did most of his damage at even strength and averaged less than 15 minutes per game.  Well, he wants to get paid as Hoffman is demanding double want the Sens are offering according to reports. With the Sens never being a team that spends to the cap, Hoffman’s is a situation many teams will monitor closely.

See you next week peeps…