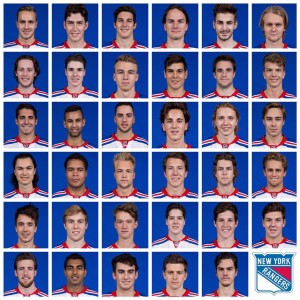 Head shots of all prospects that attended

It is pretty sad to think about, but once the first two days of free agency pass we enter the really slow, mind numbing part of the hockey year. A time where the biggest news on some days is an AHL backup goalie signing with an AHL rival.

Around a week ago the New York Rangers released the roster for their prospect development camp, which included both draftees and undrafted players. These kinds of camps are usually good for finding players that can really stick out, such as Vlad Tkachev, an undrafted forward who amazed the Oilers and forced them to try to sign him (it later got blocked by the league).  Scrimmages from camp can be found on blueshirtsunited.com.

The entire roster can be viewed below, it is worth noting that the Ranger’s 3rd round pick Sergey Zborovskiy couldn’t come to camp because of passport issues. It is also worth noting that players from the KHL didn’t come, which I believe is because of the new transfer agreement between the KHL and NHL, a work in progress, as many teams have had difficulty bringing in their KHL draftees this year. Aleksi Saarela also didn’t come to camp, which may have to do with him playing in Liiga as no invitees are from that league.

I am terrible at any kind of photoshop but I placed black dots on all of the undrafted players on the grid below. 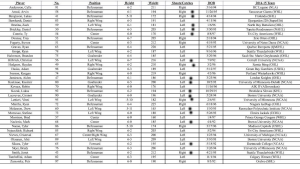 We will go alphabetical order here:

Lukas Bengtsson- Bengtsson may be one of my favorite prospects on this list. He may make some people uncomfortable, as some prefer a defenseman to have size, but the truth is he may be one of the best undrafted players here. At only 21 years old, Bengtsson has already recorded over 30 points in his last two seasons playing for Mora in Sweden’s second league Allsvenskan. Mora isn’t the best team, yet Bengtsson continues to not only put up points, but be a very smooth skater and responsible defensively.  Bengtsson was also given the A at his young age, showing how much respect he commands in the locker room.

Other teams began to enjoy watching him play. This caused Frölunda (Lundqvist’s old team) to bring him in to play with them during the playoffs in Sweden’s top league (SHL). Bengtsson didn’t miss a beat, recording four points in nine playoff games even against better competition. Bengtsson may not be big, but he uses his skating and stick work to be a very good defenseman in his own end. His skating and passing help the puck out of the zone. To put it simply, Bengtsson is the model of what the modern NHL seems to be leaning towards now more than ever: a talented, very mobile defenseman who uses that to his advantage on both sides of the puck. Most that watch him regularly in Sweden have compared him to a former Swedish Ranger by the name of Anton Stralman.

Zach Bratina- Bratina is a player that I don’t know much about, but his name caught my attention when Gordie Clark put him in a group of players that have impressed him at camp so far. Bratina is a gifted player with a nice frame, but in my opinion hasn’t really stood out in his OHL career so far. However, if there is one thing that I really like to see, it is that he seems to be continuously improving, building on his point totals and doesn’t seem to be plateauing.

Clark hinted the Rangers may have interest in him, but at 19 years old he is eligible to go back to the OHL. I will be interested to see whether or not they sign him now and let his contract slide this year, or, wait to see how he does next season in the OHL to make their decision. Bratina is a nice skater and a hard worker so it would be nice to see him continue to improve and hopefully become a pro soon.

Lukas Kozak- Kozak is a player that if the Rangers have interest they would probably have to sign him soon. The 23 year old defenseman with a nice frame has shown success in his time playing in Slovakia, both by producing points offensively and being very stout defensively. His play in the Slovakian league impressed HC Slovan Bratislava (KHL), where he now plays and doesn’t look too out of place there. His contract in the KHL just ended, so it looks like he will decide whether or not he is coming to America or back to Russia, soon as the KHL season is only a month and a half away.

Ahti Oksanen- He is probably my favorite prospect here. The Finnish 6’3 skater for Boston University can play both LW and D, making him a very valuable add to the team’s system. While he may have been a product of Jack Eichel, it is nice to see him constantly improving in every season in the NCAA. Those are usually the prospects that have a better chance to succeed.

Oksanen has a huge boom of a shot and is very effective on the powerplay. He uses his size well and is a solid skater. Oksanen also scored a couple of goals over this week, so there’s a chance the highly touted NCAA player caught the eyes of some of the management.

Ideally I would love for the Rangers to sign both Bengtsson and Oksanen as it adds depth in numerous places in the NYR prospect system.