Why the Rangers could afford to move Carl Hagelin 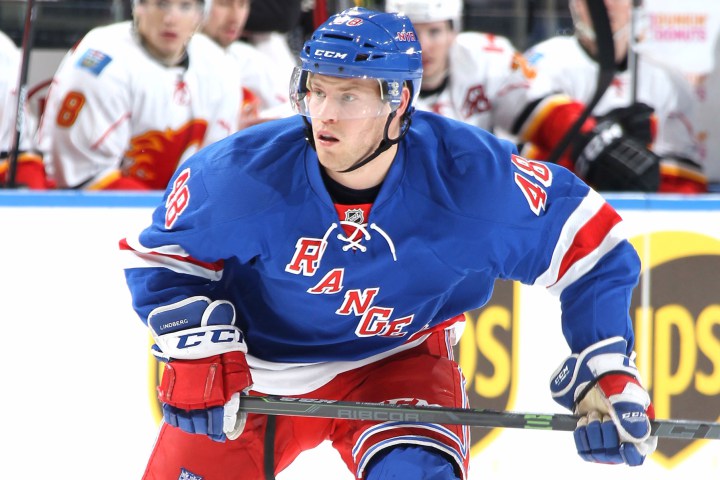 While the disappointment of Carl Hagelin’s (necessary) departure still lingers for some, something might have been forgotten. The Rangers you may recall, have a rather talented NHL ready prospect, on deck, waiting for his chance. Thanks to the Hagelin trade, the path should now be clear for Oscar Lindberg’s arrival in New York.

Lindberg has been ready for a while, a fact only emphasised by his impressive AHL playoff performances this spring (16 points in 15 games). The main problem may have been finding an appropriate spot in the Rangers line-up suitable for Lindberg’s skill set. So is it a case of exit Hagelin, enter Lindberg?

There is always risk in moving an established player to accommodate one with little big league experience; that is a pit fall of the cap era. The key however is to have a prospect ready for a chance rather than have to force feed an under cooked prospect to the NHL wolves. Lindberg is an ideal replacement. The Swede has offensive skill, he can skate well, he’ll help on the penalty kill, his faceoff ability is a plus and he is a mature prospect that should fit well on the Rangers roster. He may even end up being an upgrade. His new deal also should not be cost prohibitive to the Rangers in the short term.

The most successful teams in the cap era perform good asset management. Those teams are able to consistently infuse a roster with talent and at the right times. Hopefully Lindberg will be the next example, after successful recent integrations for Kevin Hayes, Jesper Fast, Chris Kreider and eventually, JT Miller. Lindberg is younger than Hagelin, the Rangers have more control over his next contract(s) and he’ll add to their overall skill level. He is also not a free agency acquisition and should acclimatise to New York quickly. It doesn’t matter that the two Swedes play different positions there are enough players on the roster that can move around to accommodate Lindberg.

Lindberg’s situation is similar to that of former Ranger, Artem Anisimov. Anisimov was ready long before he was finally brought up. In 2009 Anisimov had an oh-so-brief late season cameo on the back of a dominant season in the AHL before he actually graduated to New York a season later. He then quickly became a solid part of the Rangers roster. Lindberg, like Anisimov was, has been managed well, managed patiently and is surely ready for the NHL.

There are similarities between Lindberg and Hagelin. (Obviously) they are both Swedish, both are good two-way forwards with high hockey IQ and both skate well as well as boasting strong work ethics. The similarities hopefully don’t end just because of Hagelin’s departure.

If Lindberg develops as hoped and follows in Hagelin’s footsteps maybe Sather’s trade of Hagelin will be another example of good roster management, a player moved at the right time. Opportunity has been created through Hagelin’s departure and not just for Emerson Etem. The Rangers have an exciting prospect ready to step up. People just need to remember he was already in the organisation.


Categorized: State of the Rangers