2015 NHL Draft: Breaking down who the New York Rangers selected 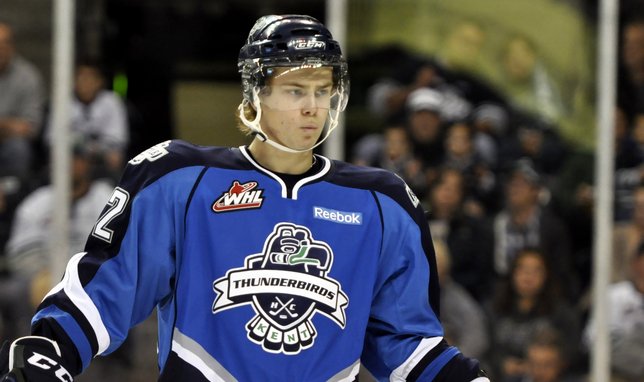 Well, the day I have been looking forward to since the Rangers got eliminated is officially over. I will be brutally honest here, this wasn’t a great draft for the Rangers in my personal opinion, but it was still nice and I am more happy about this one than last year’s. My ideal plan for the draft was to go for whichever player had the most skill, something teams like Toronto and Philly did. Even though the Rangers didn’t necessarily do that, I have faith in Gordie Clark and am pretty happy with guys we took today.

Ryan Gropp- Gropp was a player that I wasn’t expecting to be available by the time the Rangers picked, but he is a nice player. My only gripe about him is that the Rangers didn’t draft the more skilled player in Sprong instead. That said, Gropp is a very solid pick and has a pretty nice chance to make the NHL. He has good size at 6’2, 183 lbs, but he brings more to the table. Gropp is a really swift skater and has a wonderful shot for a kid his age.

One of the things many people don’t talk about is Gropp’s soft hands. The kid is poised to be a nice goal scorer in the NHL, most likely a 2nd line kind of guy. What he needs to work on however, is getting to the front of the net and being hungrier to get the loose pucks. He is a perimeter player, but a sniper with a big body for sure. He may be going to North Dakota next season which is a great thing for both us and him, as he is bound to get stronger playing against these older players. Even if he doesn’t Gropp will be given a lot of time in Seattle and can take his game to that next level. Some more interesting things on Gropp is that Gordie Clark said he was a top offensive prospect in the draft that would be available by the time the Rangers picked even ahead of some 1st rounders. That is probably why they passed on Sprong.

This is another little chart I like. As some of you may know Barzal is truly a potential top 6 center and it is only natural that some fans worry that Gropp may be a product of him. This puts that to rest.

Overall, he is a nice offensive player that needs to just get to the net more. His game revolves around his skating and quick accurate shot. Nice pick at 41 and has the potential to be a 2nd liner.

Robin Kovacs- Kovacs is a great addition with the first pick of the 3rd round. Kovacs is 6’0 172 lbs and is capable of playing both wings. Already putting points up against men in Sweden’s second division this pick seems to be a good one. Robin is a hard worker with speed, and he uses that to get loose pucks and to bother the opposition. Kovacs is the kind of player the Rangers love to have in the system, a hard working player capable of being effective on both ends of the rink.

Offensively he has a pretty accurate wrist and snap shot to go along with his sweet stick handling ability. His vision on the ice and creativity also makes him a nice player to have on the power play to help set plays up. Kovacs not only has skill but also a little edge to his game, and being the tenacious player that he is he is just a buzz saw on the ice. Although he still needs to improve on his skating he a pretty great all around player that can be either the shooter or the playmaker on the play.

If I had to guess the kind of player he can be, he would be a nice 2nd/3rd line scorer that fans would love.

Sergey Zborovskiy- This is a pick that I am questioning a little. Don’t get me wrong I like the player, but the Rangers must really see something in him because they took him a bit earlier than I think most expected him to be taken. Zborovskiy could have probably been taken in rounds 4 or 5, but like I said the Rangers clearly like him. The 6’3, 198 lbs defenseman is definitely a project pick. He is also a Rangers fan, and his favorite player happens to be Ryan McDonagh, who will hopefully one day show him the ropes. Sergey is a project player, it will take him at least four years to really be given a chance at the NHL level, unless he takes massive leaps.

Zborovskiy is a two-way defenseman, but is definitely more proficient on the defensive side. He came to the WHL this year after not getting much time playing in Russia’s second league (MHL), even though he could’ve probably done well there. Zborovskiy skates pretty well for a big defenseman and is still getting used to the high tempo North American game. I guess the Rangers think when he really feels comfortable he can break out. He has good lateral movement and Sergey also has a nice first pass out of the zone which will help in the transition game.

All in all, the kid is an all around defenseman, at least that is what he is trying to become. He plays a physical game at times and has no problem trying to join the rush to help his team score. He needs to work on a little bit of everything, but the hulking right handed defenseman does add something to the Rangers prospect pool. He probably pans out as a bottom pairing defenseman. That said big guys like him take time maybe he will surprise us.

Aleksi Saarela- Here is one of the guys that I was expecting the Rangers to take. While Zborovskiy is a project defensive player, Saarela is a project offensive player. He has all of the tools to be a top-six forward at the NHL level; skating, shot, vision. He has it all. He just really needs to put it all together and become a more consistent threat offensively.

As I said when briefly profiling him, Saarela has a huge, booming slapshot and has no problem letting it rip even when he is skating. He has an explosive first step, and doesn’t slow down when he gets the puck. The Rangers are taking a risk in taking a smaller but dynamic center/wing. Playing against grown men already in the SHL only goes in his favor in terms of development. He absolutely needs to get stronger to speed up his development though, helping him protect the puck with more effectiveness.

This is a boom or bust pick that can end up giving the Rangers a top 6 player with 1st round offensive talent. He just needs to put it all together and become stronger.

Brad Morrison- Morrison is another player that I predicted the Rangers might select in the 4th round. Morrison is a really intelligent center with skill that also plays with a bit of an edge. He is a nice skater and is shifty enough to give himself room to produce offense. He has quick hands in tight that help him get pucks around defensemen, give good passes and score goals in front of the net.

Morrison has to get stronger on his skates if he doesn’t want to be pushed off the puck easily. Once again, that will come with age and him playing against older players. This is a pretty nice pick by the NYR and he looks like he can be a nice, intelligent, point getting 3rd liner that bothers the opposition. He reminds me a lot of Brad Marchand.

Daniel Bernhardt- This kid is a potential steal in the 4th round. I wasn’t able to watch a lot of him but he is a big 6’3, 191 lbs right wing with elite skating. He dominated the Swedish Jr. league, scoring 61 points in only 44 games. Bernhardt has some ways to go rounding out his game, but with his speed, size, and accurate shot he is a dangerous player. Set to play in the SHL next season, Bernhardt should be able to take his game to the next level while playing against the upper echelon of Swedish competition, which includes a good number of former NHLers. Bernhardt is a perfect fit for the transition game the Rangers play. His speed, intelligence and his ability to either be a playmaker or the scorer on a play gives me something to be excited about. It hurts to lose Carl Hagelin, but the Rangers drafted a pair of bigger, more offensively gifted, speedy Swedes yesterday.

Adam Huska- I don’t know much about Huska, but I will try to parlay all the information that I know. Having goalies in the system is a great idea, you never know what will happen, just look at Cam Talbot. Huska is a big goalie at 6’3, but is very, very raw. For a big goalie he is very mobile and athletic, but that causes him to be out of position a lot.

Coincidentally, the Rangers have the best goalie coach in the league that specializes in teaching younger goalies positioning (once again, see Cam Talbot). Huska is a goalie that will take at least five years to develop. The Rangers will take their time with him, but he has the raw skill. The Rangers have the depth in the position to take a risk and watch him develop.

The Rangers picked players that all fit the mold of the team they are looking to build. All of the players picked are nice skaters that have a good amount of skill even if they are risky. The players here all have the intelligence and the speed to play a fast transition game.