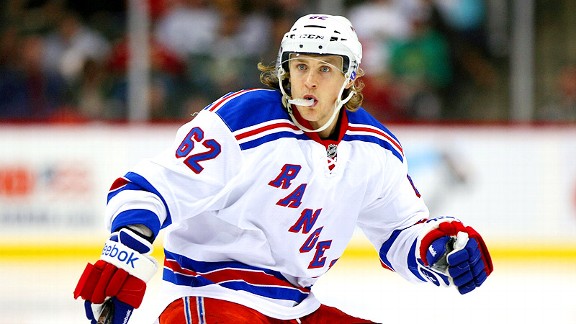 The Rangers are entering this offseason with four key RFAs, Carl Hagelin being one of them. Hagelin is coming off his two-year bridge deal, which paid him $2.4 million last year and came with a cap hit of $2.25 million. Hagelin’s qualifying offer is $2.4 million, meaning he won’t earn less than that. This would be Hagelin’s third contract, and the Rangers would be getting just one RFA year, and then buying out UFA years thereafter.

This past season, Hagelin put up 35 points (17-18-35) while playing on the third line at even strength. One of the interesting aspects of Hagelin’s scoring line is that he put up 34 of those 35 points at even strength, because he “stinks” on the powerplay. He also was one of the Rangers best penalty killers.

Finding comparables for Hagelin is a little tough. Lars Eller comes to mind, since he has a similar role on the Canadiens and has comparable production as a 15-goal, 30-point guy. Eller signed a four-year deal with a cap hit of $3.5 million before the start of last season, his third contract. The deal pays Eller $2.5 million through next season, and then jumps to $4.25 million and $4.75 million for the final two years. Eller is a year younger, and the reason for that jump to over $4 million is because those are his only UFA years in the deal.

Alex Killorn in Tampa Bay was one player I thought could be a comparable, but he has one year left on his bridge deal, paying him $2.7 million. Cam Atkinson, who just inked a three-year extension with a $3.5 million cap hit also came to mind, but his bridge deal was almost half of Hagelin’s. That contract bought one year of unrestricted free agency, at $4.5 million.

Eller is really the best comparison here, and Hagelin is the better player. Earlier this year, I wrote a post on why keeping Mats Zuccarello was important, and in that analysis, Hagelin’s name came up in a few charts. I’m going to recap some of that here.

Travis Yost wrote an article for TSN yesterday explaining why Sean Bergenheim and Erik Condra are bargains for the Winnipeg Jets. While the premise of the article does not address the Rangers or Hagelin directly, he appears on Yost’s charts used for comparisons.

The first chart he uses shows players that can drive the play in both quantity (CF%) and quality (SCF%), and both in raw numbers (above 50% for both) and relative to his teammates (+1.0% in both). Here are the exact parameters:

Let’s work through some quick criteria to isolate for players with excellent underlying numbers. We will pull out forwards who have logged at least 2000-minutes since 2010. The forwards must have been on the ice for 53% of shot-attempts (we’ll use Corsi%) and 53% of scoring chances. The forward must also have been a quality relative player. That is, his team must have measurably benefited from a possession and scoring chance standpoint with the player on the ice. We’ll set +1.0% Relative Corsi% and 1.0 Relative ScoringChance% as additional parameters.

Hagelin is on this chart, with some absurd company (only 43 players make the cut here): 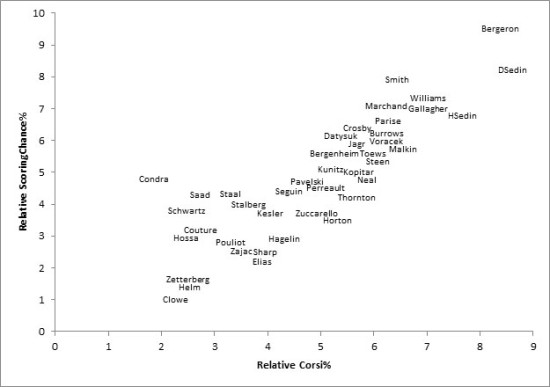 That’s some pretty amazing company that Hagelin is keeping: Toews, Crosby, Thornton, Seguin, Datsyuk, Parise, Couture, and Kopitar. This chart is designed to find bang-for-your-buck players, and Hagelin is keeping some pretty elite company, despite playing on the third line for the Rangers, while those guys are all first liners with oodles of PP time.

Since Hagelin doesn’t get PP time, and plays on the third line with inferior players (not a slight at his linemates, but they aren’t at the same level as the others), his point production should suffer. Despite this, he puts up 1.6 P/60 at even strength, a solid rate. That 1.6 P/60 at even strength is better than guys like Kessel, van Riemsdyk, Giroux, Zetterberg, Marleau, Nyquist, Skinner, Kesler, Bozak, and many others. Eller’s P/60, for comparison’s sake, is at 1.2.

The difference here is powerplay production, in which Hagelin doesn’t get any time because, let’s face it, he’s not good on the powerplay. But at even strength, he’s one of the best third liners in the game, and plays significant time on the penalty kill. That’s worth the $4 million to me.

But Eller’s deal jumps to $4.25 million and $4.75 million in his final two years of the deal, both UFA years. And therein lies the problem: The Rangers are buying a lot of UFA years from Hagelin.

I initially pegged Hagelin for a cap hit around $4 million, which is 5.6% of a $71.5 million cap. In a vacuum, that’s perfectly acceptable, and a very wise investment for a guy who drives possession the way Hagelin does. I think I may have undershot that, but it really does depend on the number of UFA years purchased.

My guess is that each UFA year will average to about $4.5 million, with the one RFA year coming in at a nice raise to $3.5 million. In the end, my guess is Hagelin comes in on a three or four year deal at a cap hit of $4.25 million. There are very few players in Hagelin’s league at even strength, so this is a wise investment.