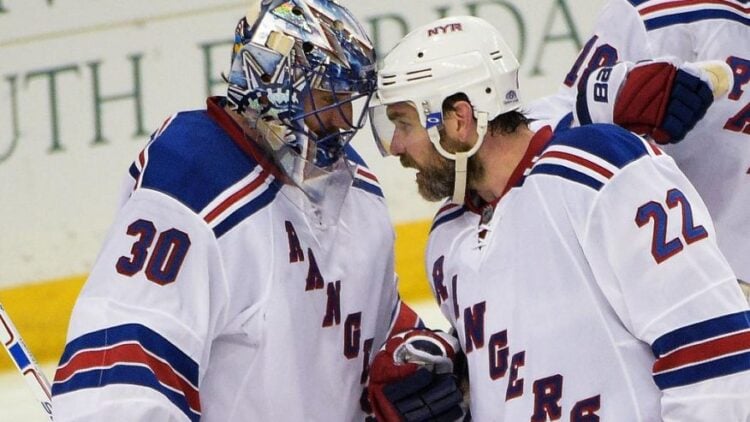 Who’s ready for another Game 7? I’m writing this as I watch the Blackhawks and Ducks duel, and it’s another reminder how much more enjoyable elimination games are when it’s not your team that’s playing. Tomorrow night is sure to be pure agony, at least until the final buzzer sounds. Then, hopefully, it will have been a ton of fun.

Since I can’t formulate coherent thoughts before this one, on to the musings:

– Though we can’t help but hope, there’s pretty much no chance Mats Zuccarello will play tomorrow. That said – if he were to practice today and was miraculously deemed game ready, where would he fit in the lineup? Zuccarello is not going to replace J.T. Miller in his old spot alongside Rick Nash and Derick Brassard after that trio produced 13 points in Game Six. Putting Zuccarello on the fourth line would obviously be a waste – but the same goes for Martin St. Louis, so slotting Zuc in on the third line and bumping MSL down doesn’t make sense either. The most likely hypothetical scenario would be to have Zuc replace Jesper Fast on the second line – but it’d be a real shame to banish Fast to fourth line Siberia with the way he’s played. Too bad it doesn’t matter.

– Speaking of Nash/Brassard/Miller, I did some quick addition after Tuesday’s game and noticed that the trio has accounted for 20 points in the series, just two fewer than the terrifying Triplets. Of course, 13 in one game skews that quite a bit, but hey, they did pretty much win that game singlehandedly (with help from Hank). You can show me all the statistics you want that say “clutch” isn’t real, but I refuse to believe it, and Brassard is a perfect counterexample.

– The last week or so has been a fascinating study of Henrik Lundqvist. Following Games Two and Three many members of the media wondered if his confidence had been shaken and if Lundqvist was second-guessing himself. Lundqvist basically admitted as much, and the adjustments in his positioning have been evident. But despite pretty dramatic changes in technique, Lundqvist has battled back and played outstanding. The numbers look pretty horrifying, especially given what we’re used to, but Lundqvist has made about a million huge saves (rough estimate). Of course he’ll come up big tomorrow.

– Hopefully there’s a ways to go yet, but I’m going to be fascinated to see individual player grades when the postseason is over. Starting with Nash, a bunch of the high profile players have generated very strong differences of opinion.

– Tanner Glass – yes, THAT Tanner Glass – has really raised his game since the beginning of March. Not sure what the stats say in the small sample, but he doesn’t look like much of a liability out there anymore.

– The amount of young talent the Lightning has is unfair, but they might still be a year early. Many of the team’s key contributors group are really untested in the postseason and both the players and coach Jon Cooper have made multiple comments about just being “happy to be here.” I’m not sure how tomorrow will turn out, but I do know that the Lightning will be here again.

– It’s pretty remarkable that three of the four guys that switched teams and drew all the media attention before the series have been basically afterthoughts. Only Anton Stralman has been a major factor.

– The Twitterverse seems to hate pretty much every Ranger defenseman not named Ryan McDonagh, which is a little confusing given that the consensus is that the Blueshirts have one of the best and deepest defenses in the league. That said, they haven’t faced too many teams with the speed and skill of the Lightning, and that’s made many of New York’s blueliners look very average.

– I’m a little nervous about the three-day break given the apparent flu bug that has infiltrated the Lightning locker room. Who knows how much of an advantage that’s given New York, but I’m not thrilled with letting the infected players rest up.

– And finally, if you haven’t seen this yet, it’s worth the click.