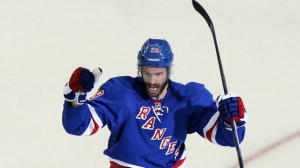 It’s easy to write positively about an individual when that player has just scored an enormous, game winning goal in the biggest game of the season to date. However, since returning to the Rangers Dominic Moore has been absolutely everything the Rangers could have hoped for and more. He has been an example to the younger players, he’s been a defensive rock, a rare shining light at face-offs for a team so inept at them and he has been unexpectedly productive, particularly when games have mattered most. All this for the comparatively bargain $1.5m per year. In many ways Dominic Moore is the ideal bottom six role player.

We can break down Moore’s production (27 points, in a primarily defensive role) and discuss the penalty kill influence and face-off efficiencies he has but perhaps the biggest advantage of having Moore in the line-up has yet to be felt. While Moore is a veteran at 34 he is not long in the tooth and the Rangers have at least one more year of Moore as it currently stands. Moore’s presence in the line-up, his unquestioned work ethic and his ability to lead by example may be keenly felt for the remainder of this playoff run but also beyond this season.

In part because of the problems experienced through Mats Zuccarello’s injury, we saw Alain Vigneault again shuffle his lines on Saturday, moving Kevin Hayes up to the 2RW spot to great effect while Moore played 3C to equally good effect. The moves took Hayes out of the faceoff circle and gave the Rangers’ top nine greater balance in Zuccarello’s absence. The result? While the Rangers still only scored two goals in the victory over Tampa Bay, the result was arguably the Rangers’ best overall performance offensively this postseason, particularly considering their puck possession throughout the game.

Even anticipating Zuccarello’s eventual return, it may be a legitimate option to keep Hayes on the wing given his ability to control the puck along the boards and utilize his rare blend of size and playmaking ability. Meanwhile emerging prospect Oscar Lindberg waits in the AHL demanding attention as soon as next season given his strong year and increasingly strong playoff performance for the Wolf Pack in the AHL playoffs.

What to do with the sudden logjam of forwards? This is a good problem folks and the link to them all could be Dominic Moore. Moore will surely return to his 4C spot next season when all are fit and healthy giving the Rangers unenviable depth down the center (who’d have thought that entering the season?).

Thanks to Moore’s steady influence there’s a legitimate opportunity to place Lindberg in the 3C spot immediately next season. Lindberg isn’t a pure rookie in terms of age and he is growing into the North American game and with a strong puck handler such as Hayes on his wing the Rangers would have a young, talented and cost controlled third line in the making. Hayes permanently to the wing may also answer the Marty St. Louis summer conundrum internally – don’t underestimate that situation – negating the need to jump into a weak free agency market this summer or over commit to a clearly declining legend in St Louis. All this thanks to Dominic Moore? Maybe.

The Rangers are in the midst of another potentially magical playoff run and looking at the impact of a player beyond this season may seem premature but this is more a compliment to the influence of Dominic Moore right now than it is a post to generate simple line up discussion. Moore’s play has helped accommodate for Zuccarello’s loss, his play may have identified Kevin Hayes’s long term position and his play may mean the Rangers can better accommodate a rapidly improving prospect next summer.

Dominic Moore does a lot of things well on the ice and he’s hugely popular off it. The effect he may have on the Rangers may be felt not just now but for a long time to come – something that’s not easily measured by numbers.