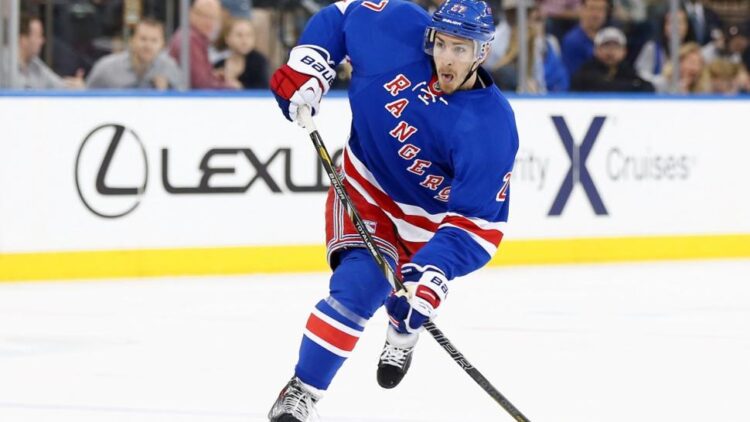 Sorry for the lack of a detailed game breakdown, the kind you get to enjoy from Dave. Dave had the audacity not to watch game five and I haven’t the time to do a full write up either but wanted to pass on some thoughts on the game so here we go. First, a very quick look at how the game was won.

The Rangers have scored eighteen goals in ten playoff games. Needless to say, that’s an incredibly low total and would usually mean golf tee-times booked by now but the Rangers have managed to extend their season at least one more game. The Rangers did so by sticking to their game plan, admirably never panicking and allowing their defense to continue to play aggressively.

After two frustrating periods, the Rangers seemed set for the start of the summer as another defensive gaffe by the Rangers (this time Keith Yandle choosing a horrible time to pinch) saw the Caps break in two-on-oh against Henrik Lundqvist midway through the third. Lundqvist saved Curtis Glencross’ initial shot but couldn’t save the rebound which Glencross chipped up over Lundqvist to give the Caps the lead.

The Rangers never relented and tied the game as the clock was about to strike twelve. Keith Yandle, somewhat redeeming his costly error on the Caps goal, got the puck to Derek Stepan who circled back along the left boards in the Caps zone and dropped the puck to Chris Kreider whose shot through traffic took an oh so minor deflection before beating Holtby. Queue pandemonium. Queue overtime.

Overtime relief came in the form of Ryan McDonagh. Intercepting a Caps pass at mid-ice was the increasingly impressive Jesper Fast who skated into the Caps zone, along the right boards, made a great cross zone pass to Stepan who first patiently faked a Caps defenseman out of position before teeing up the streaking McDonagh whose slap shot took a deflection on its way to winning the game for the Rangers in overtime. Queue pandemonium for the second time.

The Rangers had a considerable amount of high quality chances in this game yet scored their two goals off deflections with traffic in front. This appears to be the only way Holtby’s getting beaten in this series. On the first goal, St Louis had gone to the net and created some traffic and on the second goal Kreider had circled in front causing Holtby not to see McDonagh’s shot. If the Rangers are going to stay alive Sunday they’ll need more of the same.

Perhaps just as important as the traffic was the fact Holtby was not square to the shooter on both goals. Stepan’s drop pass to Kreider and his fake – then pass – to McDonagh kept Holtby moving or fighting to see the puck. It’s not quite the side to side puck movement the Rangers wanted to generate throughout the series but it’s no coincidence that Holtby was beaten on some of the few chances that he couldn’t square up to.

Stepan had a great chance earlier in the game from the slot which Holtby played extremely aggressively, coming well out of his net to remove Stepan’s margin for error. Holtby’s positioning has been exceptional all series.

It’s hard to overly criticise Rick Nash for not scoring when he continues to do everything but.

The Rangers defense continued to play aggressively and get deep into the Caps zone and while the Caps goal was a direct consequence of an over aggressive pinch the Rangers need to continue to get deep. The Rangers generated a lot of chances and zone time because of how active their defense was.

The Rangers have, generally speaking, played strong team defense all series. It’s frustrating that almost every mistake (and every team makes them) seems to be punished.

Ryan McDonagh, not just because of his rather important game winner, played his best game of the series. He was strong on and off the puck.

The Rangers did a much better job in the face-off circle. Moore won the majority of his draws, Stepan was 48% while Brassard was 55%. The Rangers don’t need to win all the face-offs but they can’t be dominated like they were in game four.

Alex Ovechkin had just two shots on net. He had six more blocked. The Rangers did a much better job taking away Ovechkin’s time and space and Dan Girardi in particular did a great job on the Caps’ captain. Ovechkin has been relatively quiet the past couple games which will need to continue if the Rangers are going to progress. Easier said than done of course.

Jesper Fast is developing  into a fine player very quickly. Fast’s defensive game has always been his hallmark but with more offensive opportunities he’s showing that he can make a difference at both ends.

Braden Holtby may be the story of the series so far but Henrik Lundqvist is the best goaltender in the world when he’s in this kind of groove. The Rangers are incredibly lucky to have Lundqvist. IF (and it’s still a big if at this stage) the Rangers progress, Lundqvist will be a Conn Smythe candidate. His numbers are immense: .942 save percentage, 1.55 goals against average and he always raises his game when it’s needed most. The Rangers might never win a Cup in the Lundqvist era but he’s the greatest goaltender in franchise history. He’ll be the reason they enter game six on Sunday with reason for optimism.