Finally, after 82 games and 187 days, the Rangers now know they will be facing in the first round of the playoffs. After a relatively strong start to the season, the Pittsburgh Penguins, suffering from a number of significant injuries, limped into the 8th and final playoff spot on Saturday. In preparation for the start of the series on Thursday, we will be running some preview posts so we can see what lies ahead for the Blueshirts in the opening round.

First up is an analysis of Marc-Andre Fleury, who will have the esteemed honor of playing behind an absolutely injury ravaged defense. Fleury had a nice renaissance of sorts this season, posting numbers far above his career averages (2.32 GAA/.920 sv% vs career averages of 2.59 and .911, respectively). He was far from the problem for the Penguins this year. I actually did a preview of Fleury way back in 2012, and the scouting report has definitely changed a bit. Quick refresher if it’s been a while; I’ll cover Stance, Crease Movement/Depth, Equipment, Puck-Handling Ability and Exploitable Weaknesses. Let’s get after it… 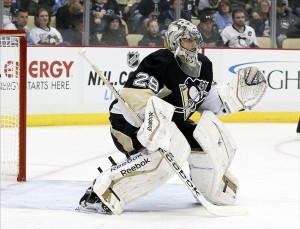 Fleury has a very casual looking stance, especially when tracking the puck. However, he has a deceptively wide set up with his skates comfortably exceeding shoulder width. This creates a strong sense of balance, especially when his shoulders lay back with his chest forward. This allows for balanced movement and square positioning, without fear that a lateral save selection will result in falling forward or backward. Fleury carries his glove a little lower than most of his contemporaries, but accounts for it with quickness.

Even as he enters his 30’s, Fleury’s movement is still well above average. He is a very good skater and can move laterally with the best of them. Because of this mobility, Fleury will play at about mid-depth in the crease, but can sometimes be lured out and taken out of position with targeted passing plays. He has a tremendously wide butterfly and high-end flexibility, so scrambling and lateral saves are something of a forte for the Sorel, Quebec native.

Since back in juniors, Fleury has worn Lefebvre products. The Quebec based equipment designer designed for KOHO back in the day and is now responsible for the Reebok and CCM equipment lines. Currently, Fleury wears the Reebok Premier XLT line, which is the newest model in the Premier catalogue that debuted back in the mid-2000’s. Nothing too earth shattering going on equipment wise for the Flower.

This is one area that should definitely not be considered a Fleury strong suit. Sure, he is competent (most of the time) regrouping dump-in’s behind the net and short distribution, however he can get himself into trouble by taking too long and not seeing the simple passing lanes to move the puck out of danger.

He has been known to get a little hyped up handling the puck, and also likes to take shots at the open net on occasion. This may not be an avenue ripe for exploitation from this incarnation of the Rangers, based on their counter attacking, speed game as opposed to heavy puck pursuit, but keeping Fleury a little jittery back there is not a bad idea.

Where else to start but between the ears? Fleury has a habit of melting down in big games/situations and has been a constant source of doubt since the Penguins last Stanley Cup run in 2009. Since then, they have had varying degrees of success, including a run to the Conference Finals in 2012-2013, when they were swept by the Bruins.

I think last year’s playoffs went a long way to removing the “playoff tire fire” reputation from Fleury’s game, but there are still serious questions about his ability to get up for big games. The Rangers need to be in his head, early and often. Send Chris Kreider, Rick Nash and Kevin Hayes to the net. Get in his face, make him uncomfortable and try to get pucks through traffic. Keith Yandle and Dan Boyle, especially need to constantly challenge his sight lines and force him into uncomfortable rebounds.

The other, lesser discussed area to be exploited in Fleury’s seeming desire to make that lateral save. This situation, I could see happening more frequently than some of the more possession-based strategies. If the Rangers are afforded odd man rushes, that look off to the wide man or the trailer could leave Fleury vulnerable on the short side. He is acutely aware of the other options and can be caught cheating when you can mask the shot well enough. Rick Nash and Kreider could take particular advantage of this.

Outside of the goaltending circus in Detroit, Fleury is among the least intimidating matchup the Rangers could draw (Halak and Hammond being the alternatives). Price, Holtby, Bishop and Lundqvist are the matchups nobody wants. Now, the Rangers need to take advantage of it.