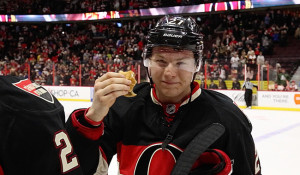 While the Rangers have been battling for the proverbial cherry on top of a charmed 2014-15 season, a lot of teams have been struggling to get in to the playoffs. The beauty of having so many teams make it there is a really, really exciting late March-early April around the league. As of Easter Sunday, only three teams in the East and four teams in the West have clinched playoff spots, with two divisions entirely up for grabs. What this means is there are a lot of good teams, and a few really terrible teams, who are enjoying playing spoiler.

There are three teams in the West mathematically eliminated from the NHL playoff picture, which pales in comparison to the East, where seven teams have next season to look forward to. The East seems pretty locked up if you were to just look at the numbers, but you’d be grossly mistaken.

Florida was mathematically eliminated after their loss to Tampa last night, leaving what many think is a two-horse race between Ottawa and Boston to take the final Wild Card spot. What people seem to forget is that the streaking Bruins (winning their last five) have 95 points: the same as the sinking Penguins. The Penguins have lost their last two, and are 3-6-1 in their last ten going into Philadelphia today. Should Pittsburgh lose out, they could miss the playoffs for the first time since the 2005-06 season.

Though it’ll be hard for Pittsburgh to miss, with Evgeni Malkin coming back and Buffalo as one of their four games remaining, the Detroit Red Wings find themselves in a similar position. Also with 95 points in the Atlantic, they have Boston almost even with them (Detroit has an extra game in hand, meaning the Bruins have one more loss than the Wings) and lots of pressure bearing down. The Wings haven’t missed the playoffs since the 1985-86 season – before lots of us were even born – but barely snuck in last season as well. Coach Mike Babcock is an Olympic gold medal winning coach, but maybe a change of scenery will do him well.

The Ottawa Senators, despite the butt kicking the Rangers dealt their way to clinch a playoff spot last week, have been tearing up the second half of the season following the departure of longtime coach Paul MacLean. Andrew ‘the Hamburglar’ Hammond coming up as their savior with really impressive numbers has rejuvenated the team, which looked flat and dead early in the season. It seems that Erik Karlsson has found his stride as captain and, with defensive partner Marc Methot coming back from an injury that sidelined him for most of the season, Karlsson has also found his unbelievable scoring ability again. With offensive outbursts from forwards Kyle Turris and rookie Mark Stone, they could win out and make the last week of the regular season incredibly interesting.

Looking at the Eastern Conference playoff picture, is anyone really safe? Even the Islanders, despite celebrating like they’d won the Cup in November, aren’t officially situated in the playoff picture. It would be really, really difficult for them to miss, but with them losing like it’s their job lately, no fan should really feel super confident.

To close out this post, here are a few Chris-like musing questions: