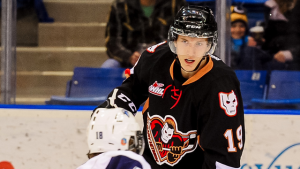 The New York Rangers have signed 2013 third round pick Adam Tambellini to a three-year entry-level contract. Tambellini, currently with the Calgary Hitmen of the WHL, has a line of 45-34-79 in 65 games this season as an overager. With Anthony Duclair now in Arizona, Tambellini is one of the better forward prospects in the system, with a good blend of size and skill.

Tambellini left the University of North Dakota halfway through last season to join the Hitmen. In the NCAA, Tambellini had a line of 2-2-4 in 16 games. In the 31 games with Calgary that season, he had a line of 17-22-39.

Tambellini will join the Hartford Wolf Pack next season, where he will likely need at least a year (probably more) before hopefully pushing for a spot on the NHL roster.