The Rangers pipeline shouldn’t concern you; musing the Rangers 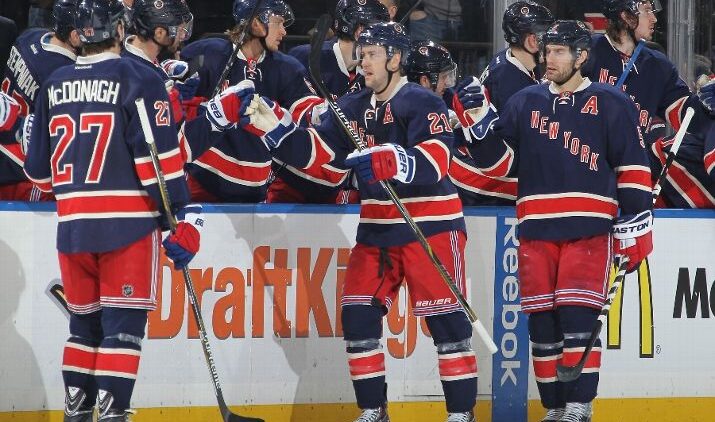 The Rangers were unlucky to come out of Detroit with only one point. Then again, how often have we been able to say in the recent past that a Rangers team would be disappointed to come away from Detroit without the points despite out skilling and out skating the Wings? Call it progress.

I saw someone call Wednesday’s game a preview of the Eastern Conference Final. If that becomes fact the Rangers would be delighted with that opportunity. The Wings are a very talented team but over seven games, and with Henrik Lundqvist in net, the Rangers would be confident they would progress.

Yandle watch: You just know a handful of fans are already moaning thathe hasn’t registered ten powerplay points yet… Yandle has adjusted quickly especially when you consider he’s had almost no practice time. It’s hard not to get excited about the upside of this team.

James Sheppard had a solid debut and he looks like he’ll bring a healthy dose of hockey IQ to the Rangers. He keeps it simple, makes smart plays and looks defensively reliable. One game does not a career Ranger make, but it was a promising start for sure.

So the Rangers acquire Keith Yandle and Dan Girardi scores a powerplay goal. Who else is amused?

I’m slightly worried Rick Nash is about to be snake bitten. He’s had a ton of good looks in recent games and was borderline unplayable against Detroit yet he’s run into some really good goaltending recently. This is why you need depth; you cannot expect your top goal scorer to bail you out every game. Can he still hit 50? That’s going to be tough.

Can a four game stretch on the road (this season) possibly be any harder than visiting Detroit, Chicago, the Islanders and the Capitals? That’s brutal and I for one would be happy with a 2-2 record (or 2-1-1…) after that four game swing, particularly having started it with a loss in Detroit.

Derek Stepan is in a funk. He’s playing fine defensively but the scoring has dried up, his line has arguably been the weakest of the top three lines (with Chris Kreider the saving grace for the line) and Stepan has gone six games without a point. If Stepan wants a big payday he needs to be much better and more consistent. Right now, despite the positional importance of Stepan to the Rangers, I think a deal similar to Mats Zuccarello’s would be more than fair for Stepan. That could be one tough negotiation this summer. He hasn’t justified a $6m salary this season.

One comment about the Wings: once again they’ve quietly developed a ton of talent from their pipeline haven’t they? Detroit is still the standard for all other organisations. Patient prospect development through good scouting, building (and drafting) around a well defined concept allows you to consistently produce your Nyquist’s, Tatar’s and Abdelkader’s . They have another batch on the way too with Anthony Mantha, Teemu Pulkkinen and Dylan Larkin among others. Lidstrom who? Yzerman who? (I kid).

Back to the Rangers: the Wings example is why people shouldn’t overreact to the Rangers trading away picks to help a legitimate cup run. It’s not always about first round picks. The Red Wings always find quality in the later rounds and the Rangers have done that (and have needed to) as well. Drafting Duclair in the third round helped bring them Yandle. Pavel Buchnevich looks a keeper and he was a third round pick. The Rangers have three promising goalie prospects none of which were first round picks. Jesper Fast was a 6th round pick who looks like he could be a long term Ranger. The examples are there to be seen. The recent, solid Ranger prospect development has allowed them to risk moving picks for a (real) chance at the Cup.