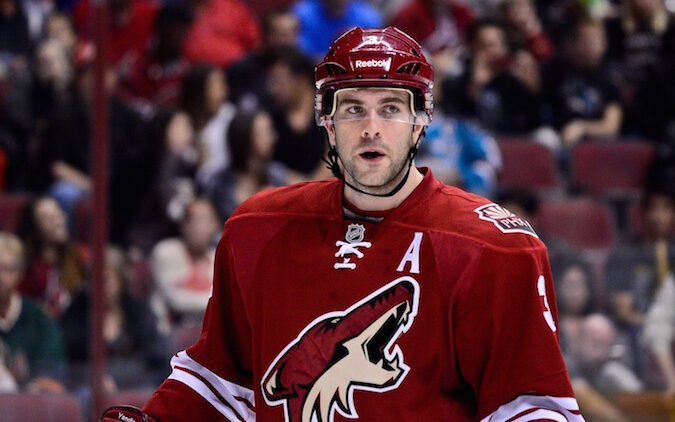 UPDATE: Darren Dreger has confirmed details of trade: Yandle and Summers and a 4th for Anthony Duclair, John Moore, a 1st (2016) and a 2nd in 2015. Yotes retain 50% of Yandle’s salary.

This trade has massive implications for both the short and long term folks. Sit tight and hope for a cup this summer.

Glen Sather certainly isn’t gun shy. In a stunning move Sunday afternoon the Rangers have acquired Arizona Coyotes offensive defenseman Keith Yandle and in return have sent arguably the best prospect in the system, Anthony Duclair, defenseman John Moore and a 2016 1st round pick back to the Coyotes. As part of the deal and to make it cap workable, the Coyotes have retained 50% of the Yandle contract while the Rangers also receive Chris Summers (2006 first round pick and defenseman) in the trade.

Yandle is a strong offensive defenseman and is a clear upgrade. In fact he’s a huge upgrade for this team. The big concern is the cost to obtain him. Yandle has 41 points in 63 games, 26 of which are on the powerplay. He is -32 (yes you read that right) but that will likely be in part because he’s on a horrible team. We’ll discuss fancy stats at a later date.

Glen Sather is clearly going for the Cup. He thinks the team is close and doesn’t want to miss out. This trade could really go to both extremes. If the team win the Cup Sather will be justified but several moves over the past 12 months have started to give the feeling of the late 90’s early ‘00 Rangers who loaded up on brand names but eventually became a league laughing stock.

What will happen this time? This time is relatively young, has a strong core and an elite goaltender still in his prime but the pipeline is really starting to look bare. How this franchise fares long term really does now depend on the development of Kreider, Stepan and the kids. Whatever happens moving forward, Glen Sather has no problem with putting his neck on the line. The Yandle move is an incredibly bold move.