Revisiting that bursting bubble for the Rangers 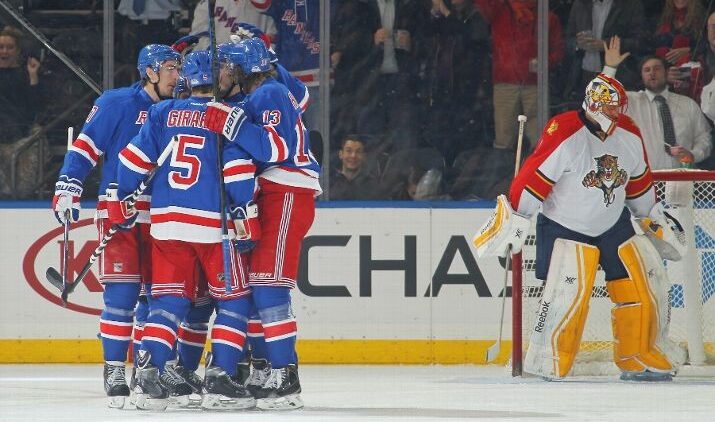 Earlier this month, I wrote a post about the New York Rangers and how their underlying numbers weren’t those of a team that can win a Stanley Cup. While that post may have been a bit doomsday/worst case scenario, the numbers didn’t lie. It’s a position that I still take: I don’t believe this team has been playing a dominant puck possession game, like they did last season. Of course, they haven’t been dressing their best lineup, but that’s a horse I’ve beaten to death.

Let’s revisit those possession numbers, using the last two months of games as an indicator of how they’ve been playing. Now this is where things get interesting, as the Rangers have actually played to a 52.9% SAT%/CF% over the past 23 games, since January 1, 2015. All this while playing a possession vacuum on the fourth line regularly (ok, sorry).

Here’s a chart of how they’ve performed:

It’s worth noting that there are very few games under 50% here. Their average has been 52.9%, which has boosted them to 51.3% CF%/SAT% over the course of the season. I have to admit, that’s fairly impressive when you consider that Tanner Glass is in the lineup regularly (I know, I know, but it’s a serious issue).

Now there are still some concerns. Their on-ice SH% is still absurdly high, and has been carrying them while Henrik Lundqvist has been out.

This is very, very high.

This chart shows their SH% over the same time frame, and it’s been about 10% over that time, which is very high. They’ve had a high SH% all year at 9.4%, second only to Tampa Bay at 9.5%. The concern here is that SH% is very volatile and has been shown to be a skill that is not repeatable, and league average is around 7%. The good thing is that when Hank returns, he should be able to carry them through some shooting droughts.

Another concern is right defense, which is a bit of a mess outside of Kevin Klein. Dan Boyle has been a non-factor, and Dan Girardi has been subpar, and that’s putting it nicely.

Those are two pretty big red flags for this team, and that doesn’t even include the looming roster decision coming when Jesper Fast returns to the lineup. I’m hopeful that Alain Vigneault will see the chemistry of Carl Hagelin-Kevin Hayes-J.T. Miller and not mess with it. I think it’s actually a possibility now, as Miller appears to have gained some of AV’s trust.

A lot can happen between now and the trade deadline a week from now, and this team really perplexes me. I’m still cautiously optimistic, whereas last year I was much more confident. This team wins though.