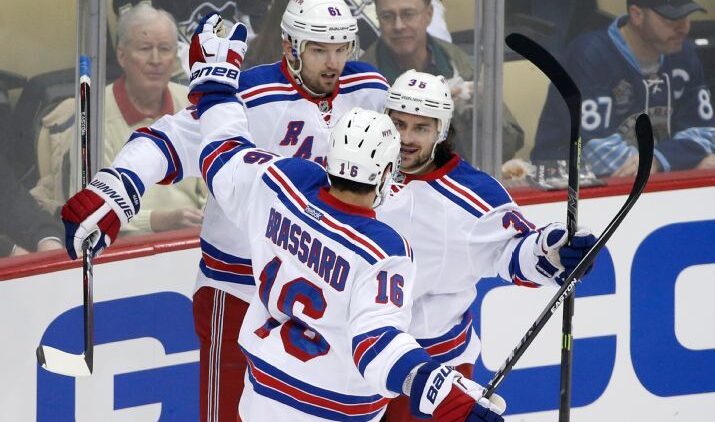 Just as everyone started jumping ship after a pair of losses, the New York Rangers have now won two in a row after dominating the Pittsburgh Penguins yesterday in Pittsburgh. New York got it going quickly, with Rick Nash scoring less than 30 seconds into the game. That set the tone for the Rangers, who disrupted the Penguins throughout the game, finally getting back to using speed and skill to create turnovers and offense.

Henrik Lundqvist was solid as well, making 32 saves –including stopping 14 of 15 in the third period– en route to the victory. The top-six did their thing, as Nash and Derek Stepan scored twice, Derick Brassard contributed a goal and an assist, and Martin St. Louis and Chris Kreider had a pair of assists each to lead the Rangers.

No one is going to say anything because they won, but the Rangers won 52% of the faceoffs yesterday. Another thing few will mention is that the Rangers had the majority of the powerplays yesterday, despite playing the Penguins –and Crosby– on national television. There’s no Crosby bias, but it would be awesome if the refs let them play the game.

Kris Letang couldn’t handle Brandon Sutter’s cross-ice pass to the weak side, which bounced past Letang and sprung Nash for a 2-on-1 with Mats Zuccarello. Nash elected to shoot, beating Fleury stick side for the quick lead.

Brassard won the offensive zone faceoff, which eventually got to Kevin Klein at the mid-point for a rocket of a shot that went over the net. The puck took some funny bounces, and Brass wound up with it in the slot and put it past Fleury.

This was an interesting goal to watch. Nash is on the PK up high to disrupt passing lanes and generate some potential offense. This is what he tried to do, but Letang was able to get his pass to David Perron. This created a 4-on-2 down low, as Nash was recovering from missing the pass to Perron and Stepan was covering the passing lane to Malkin at the high slot. Perron’s shot (looked like a pass to be honest) created a rebound that Sidney Crosby was able to put home.

Thanks Scuderi. Much appreciated.

Kreider certainly helped this powerplay goal happen, screening Fleury in front. Fleury never saw the pass from MSL to Stepan at the off-wing, and then barely got there in time to get screened again for the shot by Stepan. This goal chased Fleury. 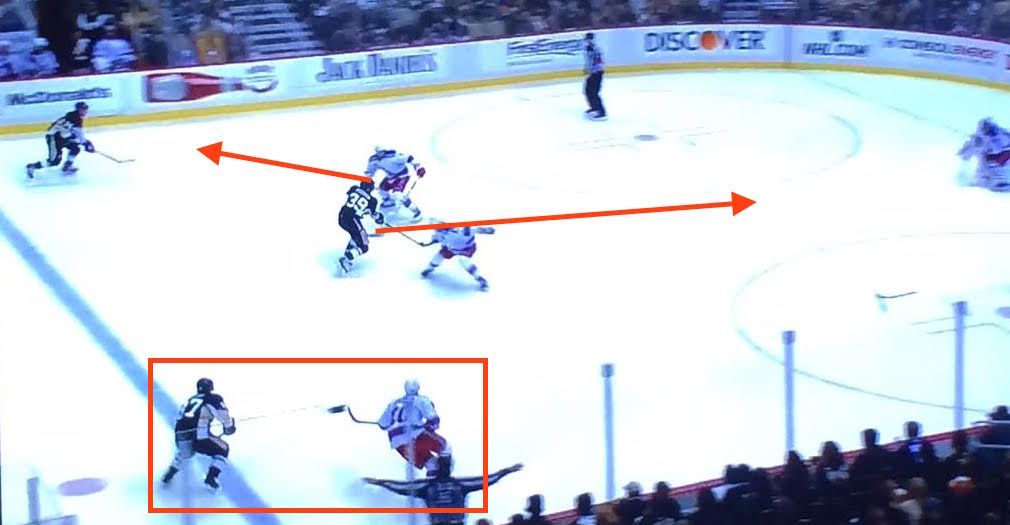 Perron found a seam in the Rangers’ 1-2-2 forecheck between Kreider and MSL, with Stepan deep in on the forecheck. With Perron rushing up the ice, he was able to split McDonagh and Girardi to get a mini break on Hank. Perron fumbled his deke, which went through a sprawling Hank’s legs for the goal. You can say that Girardi and McDonagh gave Perron too much room, which is true. However, Girardi has to account for Chris Kunitz on the right, meaning McDonagh should be coming over to take Perron straight on. Kreider had Crosby covered as well, so there’s no real reason why Perron was given such a wide berth. No harm no foul though.

This was a weird goal. Malkin lost the puck trying to gain entry to the offensive zone, and Stepan turned it up the ice with MSL and Kreider. Stepan got the puck to MSL in the high slot, who tried to hit Kreider in front, but the puck was swept away right to Stepan’s stick, who put it past Thomas Greiss. No real defensive breakdown here, just some good luck for the Rangers. 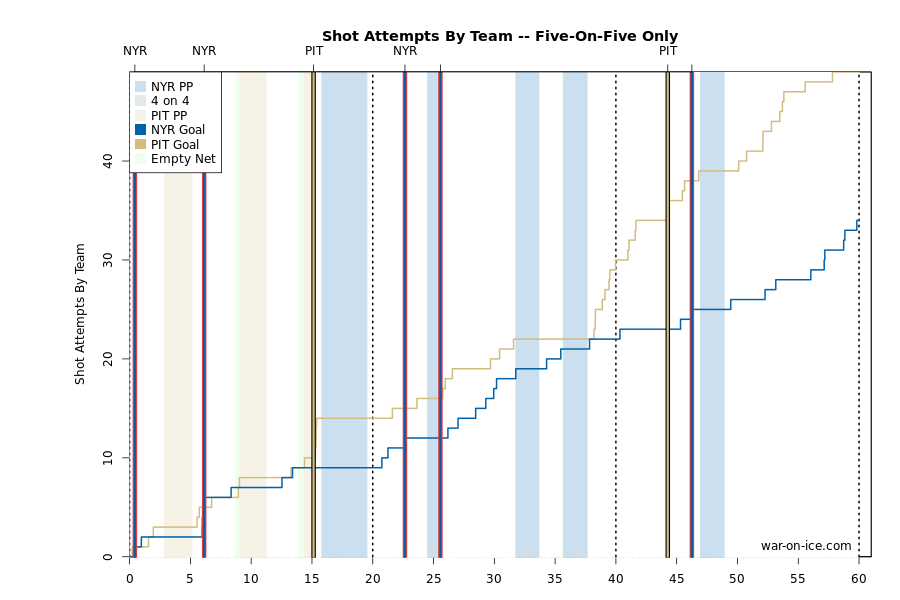 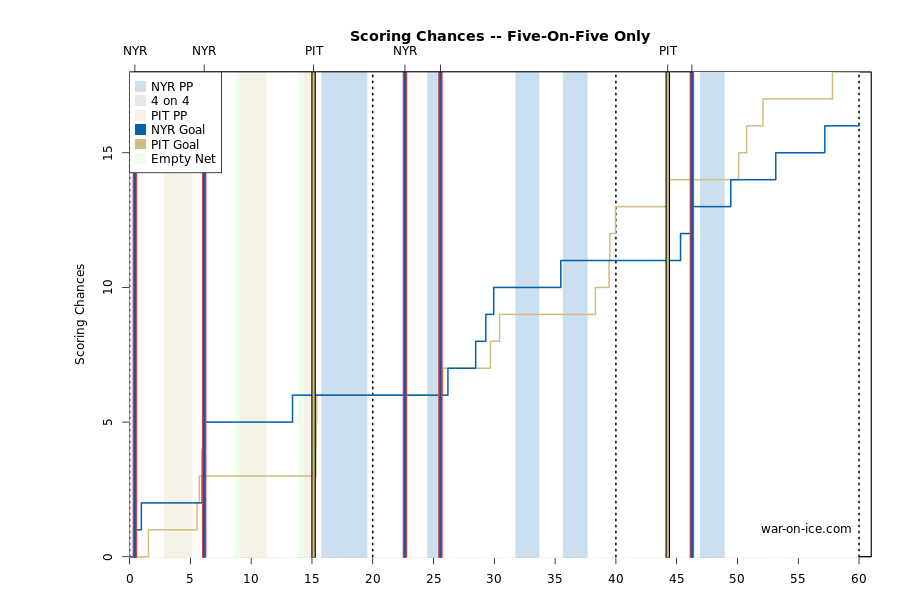 Scoring chances isn’t really affected by score effects, or at least that’s my initial observation from the limited data we have of it. I could be completely wrong though, since prevailing logic says that the more shot attempts taken, the more prime scoring chances received. 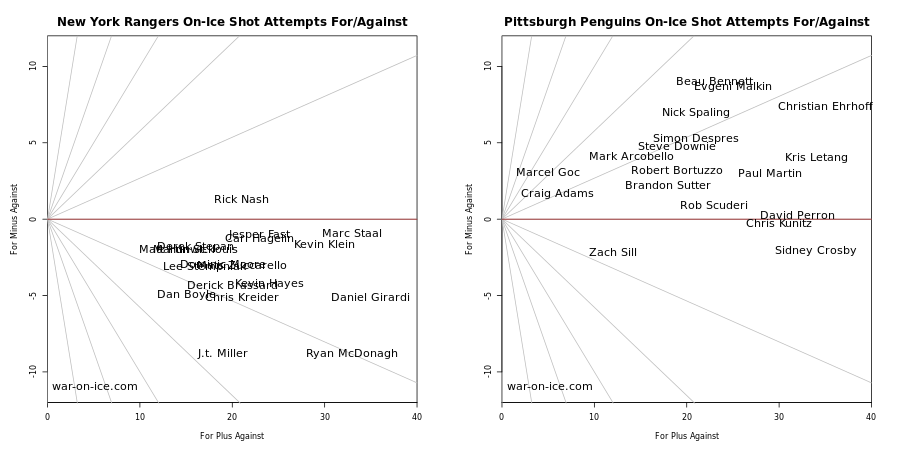 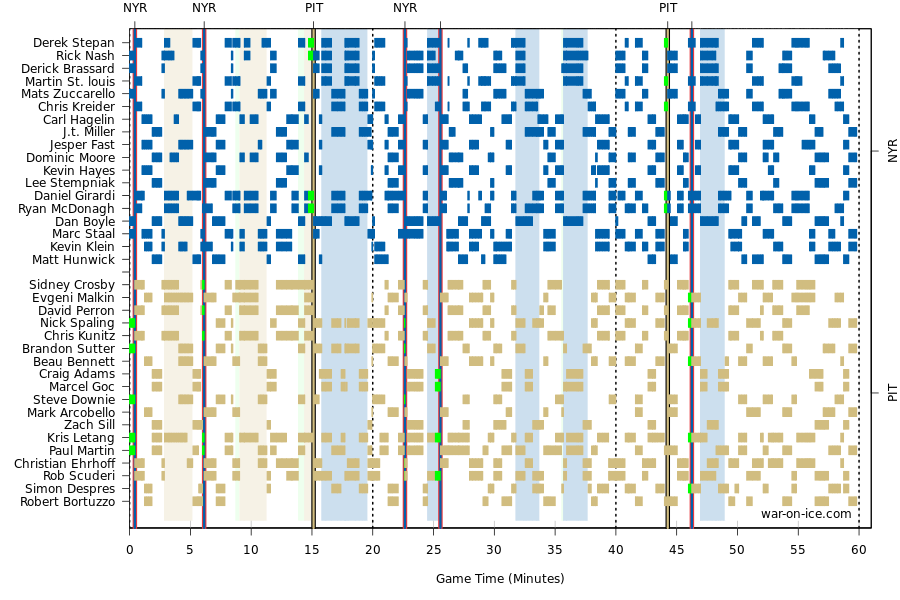 I don’t think there’s anything surprising here, as Girardi/McDonagh got Crosby. What I do find interesting is that Matt Hunwick wound up paired with Dan Boyle, not Kevin Klein. Klein wound up on the second pair with Marc Staal, primarily drawing Malkin. That’s the type of season Klein is having.

Much more like it. The Rangers limited the Penguins to few prime scoring chances. This chart isn’t perfect (it’s missing a few goals), but it gives you a general sense of shot locations.

The Rangers really needed this win, especially after the no-show at MSG against the Islanders. The win means they just need to win their game in hand, and they are in second place in the Metro Division (being 3-0-1 against the Pens is a big helper here). Winning all games in hand puts them one point back of the Isles too. The team is –has been?– turning heads with their tremendous speed and transition game. They are going to lose a few games between now and the end of the season. Some of those losses will be –GASP– in consecutive games. But have no fear, they are beating good teams too.