Update (9:15am): Renaud Lavoie has stated multiple sources expect him to go back to the QMJHL. Bob McKenzie has confirmed this.

Original Post: The New York Rangers face a key decision in the next few days: What are they going to do with rookie winger Anthony Duclair? Duclair has bounced between the press box and the lineup, dressing in just 18 of the Rangers 36 games this year. Now, some of those missed games are due to his participation in the 2015 World Juniors (he hasn’t played in December), but he was still a healthy scratch for stretches at a time.

Over those 18 games, Duclair put up a line of 1-6-7, not overly impressive but definitely not bad. The bigger issue was that Duclair didn’t register a goal and had just two assists in November. He bounced around the lineup a bit, but spent most of his time with Carl Hagelin and Kevin Hayes.

His #fancystats aren’t bad either. He’s on the positive side of relative CF% at 0.4% (51.3% CF). Those numbers should be taken lightly, as Duclair received heavily sheltered minutes (60% OZ starts, fairly easy quality of competition faced). The chart below shows how he ranks compared to other Rangers forwards: 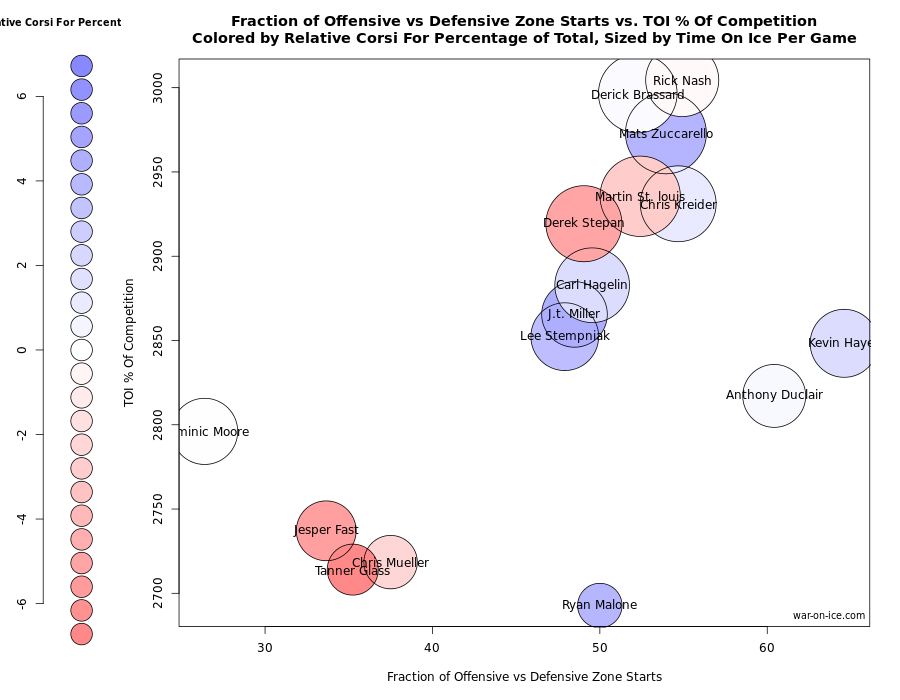 The issue with Duclair is where he would play in the lineup. He needs to play top-nine minutes according to Alain Vigneault, and it’s tough to really argue with that. Assuming the top-six are Rick Nash, Derek Stepan, Martin St. Louis, Chris Kreider, Derrick Brassard, and Mats Zuccarello; then Duclair is competing with Kevin Hayes, Lee Stempniak, Carl Hagelin, and J.T. Miller for a spot on the third line.

Hayes and Hagelin are staying on the third line for now, so this turns into a competition between Duclair, Stempniak, and Miller. Assuming Tanner Glass remains a healthy scratch, AV has shown little hesitance in putting Miller on the fourth line with Jesper Fast and Dominic Moore. I have no real complaints with that. I’ve been clamoring for that lineup composition for a while now.

Has Duclair done enough at the NHL level –or at the World Juniors– to show that he deserves to be in the lineup over Stempniak? Stempniak has better numbers, both traditional and #fancystats, than Duclair (5-7-12, 52.6% CF, 3.7% CF rel, tougher competition, fewer OZ starts). We are victims of small sample size here, but it’s tough to argue that Duclair has been the overall better player than Stempniak.

That’s not a slight against the winger, who has shown great improvement in his game with his stint in the NHL. We’ve seen it in his play at the WJC. If he hasn’t taken the spot from Stempniak, and Miller has been lights out, then who does he replace in the lineup?

The biggest problem is that if the Rangers send Duclair back to Quebec in the QMJHL, they lose him for good. Quebec hosts the Memorial Cup this year, so the Rangers wouldn’t be able to recall him until May. One injury means Glass is back in the lineup, and then the forward depth is questionable at best.

No matter which way you look at it, the Rangers have a tough call to make. Can a Stanley Cup contending team deal with another rookie in the lineup? Are they better off with the known entity in Stempniak? There’s no wrong choice to make here. In all honesty, it’s a good problem to have.