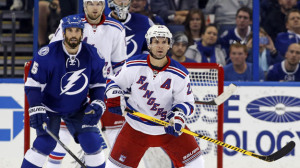 The Rangers had a very busy 2014. Highlighted by their first trip to the Stanley Cup finals in twenty years, the Rangers 2014 featured a lot of players who went through ups and downs. As we enter 2015, let’s take a look at how some of those players fared throughout 2014.

Zuccarello has always had the talent to succeed at the NHL level but 2014 was Zuccarello’s coming out party. As the 2013-14 regular season come to a close, Zuccarello was the Rangers biggest creative force while only Derek Stepan and Martin St Louis scored more in the playoffs as the Rangers fell at the final hurdle.

Zuccarello was a free agent signing with plenty of question marks and as recently as the start of last season no one really knew what the Rangers had with Zuccarello. They know now. Zuccarello is a legitimate top six forward on a contending team full of talent in their top six.

Klein was solid in the Stanley Cup run and has only gotten better as the year has gone on. When other defensemen struggled to find their form Klein was the best, most consistent defenseman to start the new season. He has been a brilliant acquisition by Glen Sather and an unexpected success.

On a team that made the Stanley Cup final and has a 20-11-4 record entering 2015 (despite a myriad of injuries) it’s hard to find too many disappointments. Chris Kreider’s struggles this year could qualify, as could Marc Staal’s regression at the start of this season but the biggest disappointment has to be the ugly departure of the former Rangers captain Ryan Callahan.

Callahan has gone on to be a legitimate top six scoring forward and not just a heart and soul, lead by example type in Tampa. While Callahan’s departure meant the arrival of Martin St Louis it was an ugly and public end to a long and fruitful marriage between Callahan and the Rangers. The Tampa edition of Callahan on the current Rangers and this Rangers team would be much more well rounded.

Several players could qualify for being the Rangers biggest bargain of 2014 but Derek Stepan gets it because Stepan produces at such a consistent rate. With a cap hit of just over $3m Stepan produced well above his ‘pay grade’ last year with 57 points in the regular season and backed it up with a solid playoffs.

Despite missing a big chunk of time this year through injury, Stepan has come back and if anything has taken his playmaking ability to the next level. With a 57 point regular season and 15 point playoffs in 2014 and 25 points in 23 games to begin this season Stepan is an absolute steal at 3.075m per year. He’ll get a big pay rise at the end of this season and he deserves it. Stepan has been a wonderful discovery for the Rangers.

When you go through the tragedy that Martin St Louis went through in last seasons playoffs, and come out and produce the way he did it is nothing short of awe inspiring. St Louis went through an incredibly tough time but showed what an amazing human he is as well as why he’s a future NHL Hall of famer. What his personal loss also highlighted was what a wonderful team spirit the Rangers have. The Rangers rallied around St Louis and raised their game in the face of tragedy and used the emotions to make it to the Stanley Cup finals.

St Louis’s game winner in Montreal will go down as one of the greatest moments in recent Rangers history. St Louis has produced this year and has given the Rangers a legitimate lead by example type even as they lost their captain from 2014. The Rangers may have lost Ryan Callahan but they certainly won when they got Martin St Louis.

Hopefully when we look back at 2015 we can identify a lot of positives on the Rangers and reflect on another Stanley Cup run. This time, with a slightly better ending.