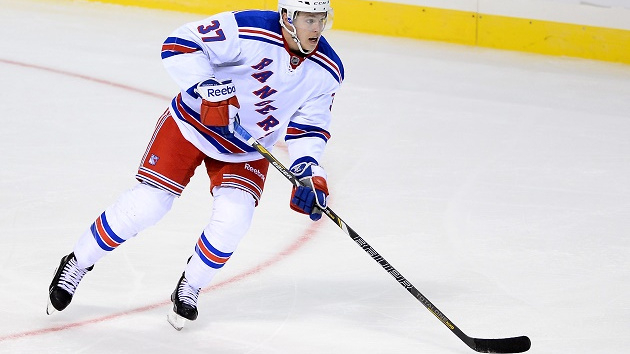 When the Rangers blue line finally gets healthy, the assumption has always been that John Moore will be the LD on the third pairing. It’s tough to argue with that, as the one prospect who appears NHL ready is currently playing at the University of Minnesota (Brady Skjei). Conor Allen, in preseason, was seemingly beat out by Dylan McIlrath as the 7D (both were sent to the AHL for Matt Hunwick, since the kids need playing time). Moore’s spot appeared to be safe.

Allen, recalled due to the Moore suspension and the injury to Ryan McDonagh, looked steady in his two games this year. He’s not flashy by any stretch, but he reminds me of a right-handed Anton Stralman. If you recall, Stralman didn’t show up on the scoreboard, but he always made the smart, short, easy pass to move the puck out of the zone. It’s something that is greatly under appreciated because it is such a subtle play. Allen showed a lot of those qualities when I watched him.

Naturally I’m a bit of a nerd, so I took to the numbers to see if what I saw matches what was produced on the ice.

Now, we are subject to small sample size here. Two games are not enough time to determine if Allen is indeed a solid defenseman or a kid playing above his true talent level.

That said, Allen’s numbers so far are impressive. He drove puck possession at a –roughly– 57% clip (10% relative), despite starting 40% of his shifts in the offensive zone (per Natural Stat Trick). He also appears to draw even with his WOWYs. Again, small sample size, but the numbers match my eye test, so he was clearly the right choice to keep around once Kevin Klein was healthy (ignoring the righty/lefty issue for the sake of the post).

Moore, on the other hand, has numbers that aren’t as nice as Allen’s. He’s still driving puck possession, but at a 56% clip (4% relative). He’s also starting 60% of his shifts in the offensive zone. Again, small sample size, but these are relatively in line with his career numbers. Allen, when compared to Moore, has had a better start to the season. I’m not sure many people would argue that.

Moore may not be guaranteed a spot in the lineup once he returns. He’s been better than Matt Hunwick, so maybe the smart move is to have Allen move up to the second pairing, have Moore slide into his spot on the third pairing, and remove Hunwick from the lineup.

With so many injuries decimating the blue line, Allen has –in his first two games– shown that he belongs at the NHL level. While Moore is in the beginning of his “show me” deal, perhaps that period of time to “show me” expired with his second suspension in 14 games. I think he gets back in the lineup, but Ryan McDonagh’s return is 4-6 weeks away. Moore will need to outplay Allen to keep his spot.