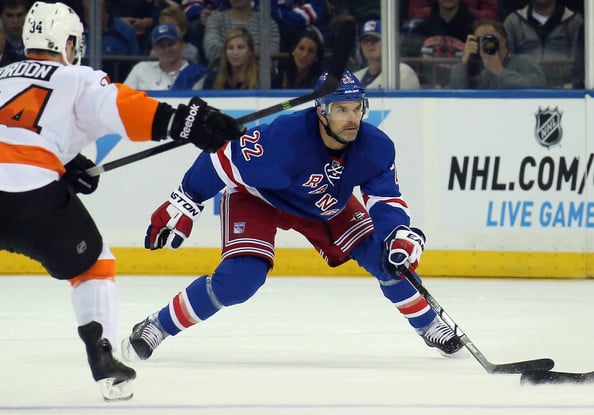 There’s been quite a gap between the Rangers’ games this week, with the wild comeback against the Wild feeling like an eternity ago. Quite a bit has happened in Rangerland since so let’s take a look around at some of the goings on.

Veterans to the rescue

Derek Stepan and Dan Boyle resume skating. The Rangers cannot get these two players back fast enough. Stepan’s absence had destroyed team depth at center and the Rangers’ issues on defense have been well documented. With the Rangers powerplay needing help, Boyle and Stepan could be the perfect tonic to a unit that has been – at best – underwhelming to this point.

Is the Rangers goaltending pipeline improving?

The Rangers have tried to remedy the lack of depth behind Henrik Lundqvist recently and there’s a few intriguing prospects worth a keeping an eye on. Brandon Halverson typifies the modern goaltender, being a big man at 6’4, and he’s off to a strong start in junior winning 7 games in his first ten appearances although his peripherals (GAA 3.15, S% .904) aren’t exciting. Reports are he’s playing well though.

Russian prospect Igor Shestyorkin is a more difficult one to gauge. He’s already played ten games for three different clubs (including the Russian U-20 squad) but his numbers are strong. Shestyorkin has 5 wins, a shutout and excellent save percentages for each club he’s represented (.943, .934, .962 respectively). It’s not always easy to get reports from Russia or to gauge the quality of opposition so his development is a difficult one to predict.

With Cam Talbot a pending UFA and the goaltending situation in Hartford a bit of a dogs dinner (AKA not good, as Cedric Desjardins isn’t a prospect) the Rangers could really do with one of their prospects kicking on in their development.

What do the Rangers have in Ryan Haggerty?

The Rangers are really still in a ‘finding out phase’ with several prospects. Guys such as Matt Bodie, Kevin Hayes and even Jesper Fast still haven’t established their levels but the biggest question mark ahead of the year may have been Ryan Haggerty. With some good performances in preseason, a solid Traverse City tournament and a strong start to life in the AHL (6 points in 7 games at time of writing), Haggerty may be indicating he’s more than a depth signing.

He’s got quite a few bodies ahead of him on the depth chart right now but a strong season in the AHL this year – coupled with a few summer departures – and Haggerty could quickly climb the depth chart.

John Moore deserved his suspension after his late hit in the Wild game and he could have received more games so he can consider himself lucky. Moore can’t afford to miss games given that his time as a Ranger has been inconsistent and he needs every game he can get to establish himself. It may be harsh to be so critical on Moore but when a player has so much talent, skating ability and there’s a genuine opportunity for a young Ranger defenseman to grab a spot and run with it, you are left wanting more from a guy with Moore’s upside. Moore’s situation bears watching. He needs to have a strong year to cement his future.

The Rangers schedule gets intense, starting tonight. Three games in the next five nights including very good Blues and Red Wings squads coming to the Garden so the Rangers could do with taking tonight’s game against the Jets in advance of (the apparently) much harder games to come.