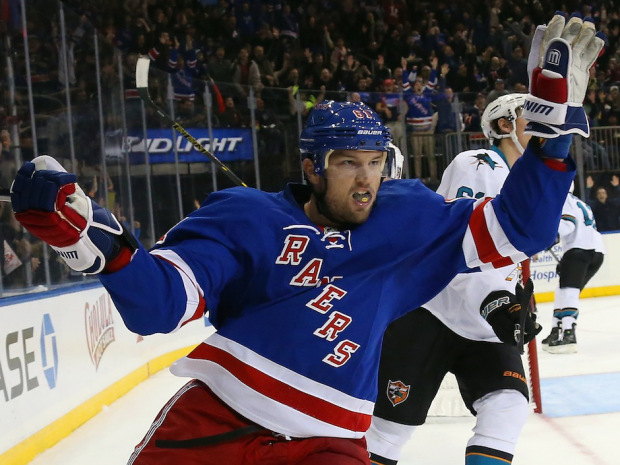 Rick Nash is off to a hot goal-scoring streak to start the 2014-15 season, scoring 7 goals in 6 games, tops in the NHL. Nash, who was the subject of much criticism over the off-season for “not showing up” in the playoffs despite strong possession numbers, is in for a bit of a wake up call, which may be coming sooner than later. Ranger fans should be expecting a goal-scoring slump from the winger, but it’s ok.

Nash has had strong possession numbers over the course of his first two seasons with the Rangers. His CF% is 54.8 over that span. This season, in even strength situations, Nash’s CF% and FF% are last on the team (44.9 and 43.1 respectively). His saving grace thus far has been an insanely high and unsustainable SH% of 44.4%, which is going to drop dramatically over the course of the season. For a player who led the NHL in shots last postseason while only scoring 3 goals, he was bound to find a string of good fortune and he seems to have found it early on this year.

Keep in mind that these are small sample sizes though so while his SH% is most assuredly going to regress, so will his CF% and FF%. These are far too low for a player of Nash’s caliber. I, like many others, have been thrilled to see Nash get off to his hot goal start, but when we dig a little deeper we can see that his game is not necessarily where we would all want it to be in terms of driving possession for the team. Keep a look out for Nash’s shifts and try to watch how often the Rangers have the puck when he’s on the ice. His possession numbers could start to improve as soon as tonight, while his scoring may dip, but the bottom line is that we expect this to happen and it’s ok.