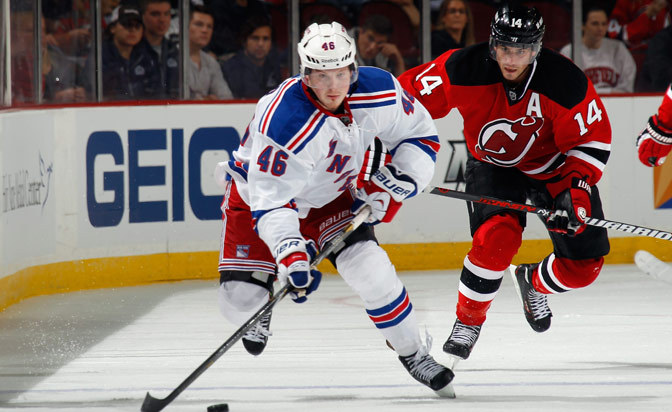 The two big names that were cut yesterday were Danny Kristo and Ryan Bourque. Both likely aren’t pleased with being part of the second round of cuts, but neither stood out over the other competition. I’m not even talking about veteran competition, I’m talking about prospects: Jesper Fast, Oscar Lindberg, Kevin Hayes, Anthony Duclair, Ryan Haggerty, and Marek Hrivik all played their way ahead of Kristo and Bourque in the prospect pipeline.

Both have their own unique situations that make their future with New York cloudy at best. Bourque, as we mentioned yesterday, is no longer waiver exempt. He will need to clear each time the Rangers send him down. Passing through now may not be a surprise, as teams are still evaluating their own prospects. Any team claiming him would need to give him an NHL roster spot or waive him again. Few teams are in a position to do that during camp evaluations.

Kristo, on the other hand, is in a very unique situation. He does not need waivers, but if he does not play 80 NHL games this season (unlikely), he becomes an unrestricted free agent at the end of the season. Since Kristo is best suited in a top-nine role with an Alain Vigneault coached Ranger team (assuming the fourth line gets most of the defensive zone starts), Kristo is very far back in the pipeline.

Both can be considered trade bait, especially because the Rangers are looking to clear a contract for Duclair. Both would have a fairly low return though. Why would a team trade for Bourque when they can claim him on waivers? Why would a team trade an asset for an unknown prospect (Kristo) who will be a UFA at the end of the year?

That doesn’t mean neither will be traded, in fact I’d probably bet that one of them won’t be a Ranger by the end of the year. However, expecting equal return (third round pick for Bourque, second round pick for Kristo) is pretty much out of the question. We are looking at mid-round picks for these guys now.

Some people –foolishly– will count this as “another sign of Gordie Clark and Glen Sather not drafting properly.” It is in fact the opposite, they’ve drafted well and targeted unsigned draftees (Hayes) and undrafted UFAs (Hrivik, Haggerty) so well that they’ve simply passed the others on the depth chart.

It’s kind odd saying this, but the fact that Kristo and Bourque are now in the middle of the prospect pipeline instead of the top is a good thing. It shows depth of prospects who can contribute at the NHL level. It’s great for the team, but it looks like at least one (if not both) of Kristo’s and Bourque’s futures lie outside the organization.