Incase you missed it the Rangers and defenseman John Moore finally reached an agreement on a one-year $850,500 contract on Wednesday. Moore, who is slotted in to the Rangers bottom defensive pairing once again, will be entering his fourth NHL season in 2014/15. At 23 years old (24 in November), the 2009 first round draft pick is running out of time to make me, amongst others, find confidence in his ability to blossom into the top four defenseman we were told he could be.

After noticing a lot of debate amongst Rangers fans I decided to take a closer look at Moore’s 5v5 metrics (his PP TOI was too small a sample for me to consider of any value).

The first thing that pops out when looking at Moore’s 5v5 numbers is his zone start percentage (ZS%) of 64%. Amongst 2013/14 Metropolitan Division defensemen this was the highest ZS% for anyone. Moore should have been able to thrive being placed in the offensive zone as often as he was, however his result was less than impressive. Moore held a corsi for percentage (CF%) of 51.7% with his relative CF% (relCF%) at -1.26%, an awful number when taking into account how he was handed the offensive zone on a silver platter. This is not out of the ordinary for Moore, who has failed to record a positive relCF% since breaking into the league with regular playing time in 2011/12 .

While his 5v5 possession numbers have disappointed, his points per 60 (P/60) was a pleasant surprise. Moore posted a P/60 of 0.61, good for fourth out of all Rangers defensemen last season. Again, when you take into account his ZS% this is really nothing terrific, but it shows he was capable of producing at a decent rate last season.

Moore was paired most often in 13/14 with Michael Del Zotto and Kevin Klein. In other words, he hasn’t been placed in the greatest situation in terms of his defensive partner. Taking a look at Moore’s WOWY (with or without you) chart from last season you can see both Del Zotto and Klein were better possession players when Moore was on the ice as opposed to when he wasn’t. 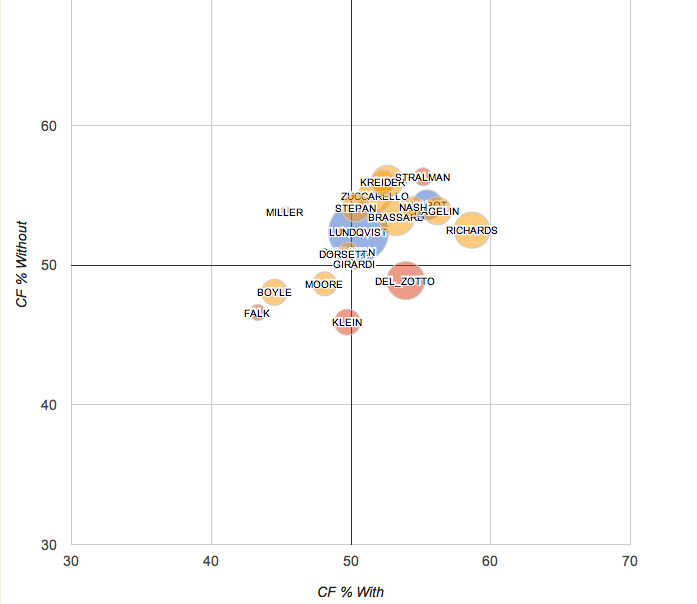 A quick look at Moore’s fenwick for (FF%) in close situations shows that while his shot generation (FF/20 of 15.08) was sufficient his shot suppression (FA/13.89) was pedestrian at best given his ZS%.

Considering Moore’s skating ability I’m curious to see how he fares with zone exits in the upcoming season. Since this is a stat not readily available to the public I have no knowledge of where he ranks or fits in amongst strong zone exit percentage defensemen. While his other numbers don’t seem great this could be his saving grace, although I highly doubt it given his low possession numbers. We will have to wait and see.

All in all, Moore’s 5v5 numbers may not look awful, but when you take all situations into account they are truly nothing to get excited about if you’re looking for reasons to believe Moore can suddenly breakout as a playmaker for the Rangers in 14/15. Given the length and cost of Moore’s deal, it’s nothing for fans to be upset about. As long as Klein (who is really not very good) is anchoring him, Moore is going to have a tough time reaching the potential many saw in him coming out of the 2009 draft. We’ve seen glimpses of a top four defenseman, but in my estimation we shouldn’t expect Moore to be anything other than a serviceable bottom 2 blueliner now or in the future. Bottom line: temper expectations.