Missing Captains around the League 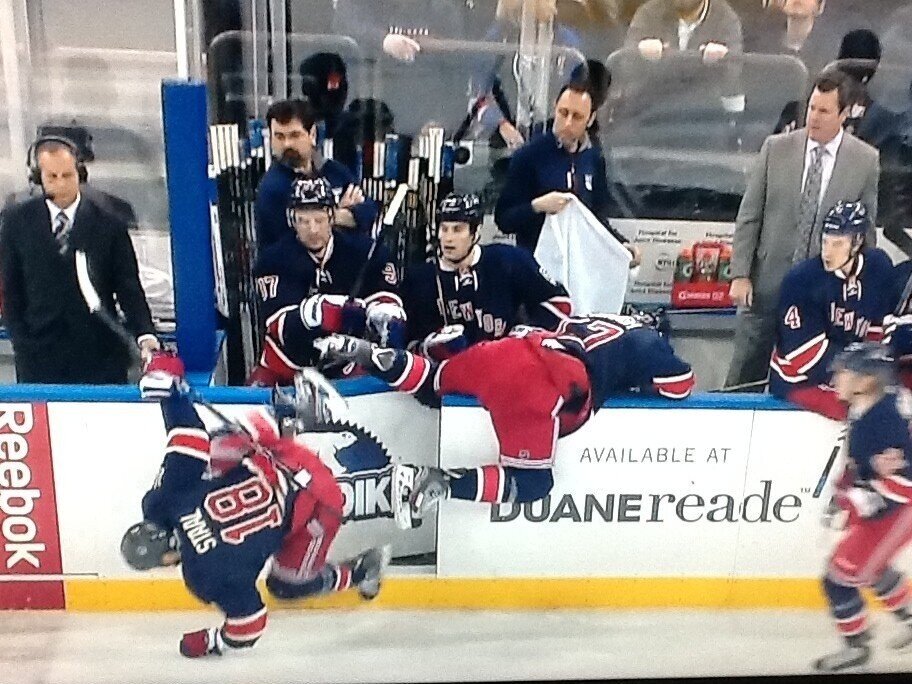 The Rangers aren’t the only team who need a C

As discussed last week, there is much speculation to who will follow in Ryan Callahan’s nearly three season footsteps and lead the Blueshirts as their fearless captain this year. The Rangers aren’t the only team to be facing this kind of indecision. Though Tampa was able to name a captain immediately after trading Martin St. Louis, several teams who have lost their captains to free agency or trades during the offseason are currently suffering a hole in their leadership groups.

Of the 30 teams contending in the NHL, seven have no current captain, and 11 have at least one missing alternate captain. Of these teams, some have lost their captains to trades or free agency, however at least one has stripped their leaders of their letters. Let’s take a look at the six clubs besides the Rangers who are missing captains leading up to training camp.

The Senators’ fanbase last year was openly unhappy with Spezza, whose quiet personality and underperforming figures made his exit on the opening day of free agency not much of a surprise to anyone. Surrounded by the fantastic offense that the Stars boast, Spezza should make a bounce back to his old form; however, with the Senators, he was looked at to boost up his young teammates.

Discussion for Spezza’s successor is centered on veteran Chris Phillips or Norris Trophy winning, young Swede Erik Karlsson, whose return to the game after suffering a nasty Achilles injury surprised many around the league during the 2011-12 season. Lately, however, names have been thrown into the hat: just this past week, local Ottawa writer Don Brennan called for Ottawa native defenseman Marc Methot to be named captain should be sign an extension prior to the season beginning (though I’m not sure being bilingual or single really has much to do with captaincy, but then again, who knows). My personal choice would be forward Kyle Turris, a young, gifted center who has flourished since being traded from Phoenix (Arizona?), but all of the names being thrown around are great choices for many different reasons.

SB Nation has written an article about this situation affectionately titled ‘The Sharks Have Lost Their Mind,’ and, quite frankly, I agree. Notorious for choking in the playoffs, the Sharks gave up a 3-0 lead on the Los Angeles Kings in the first round of the 2014 playoffs and went home with nothing more than a bitter taste in their mouths. After a summer of not doing a whole lot (except for losing two good players in Martin Havlat and Dan Boyle), coach Todd McLellan decided to strip the team of its leadership.

Not only was Thornton relieved of his duties as team’s captain, alternate Patrick Marleau also lost his title, leaving the team with no leadership group and the collective idea of letters up for grabs (Dan Boyle was the other alternate captain). Typically, the qualities one would look for in a leadership squad include at least one veteran who has been there before, but perhaps management is thinking that ‘been there before’ means ‘choked in the playoffs too many times.’ Though in theory having everyone compete evenly for a spot is fair, I don’t see stripping your veterans of what they’ve worked hard for as a great power move. Theirs should be an interesting camp, to say the least.

Pretty strong move to leave the team you’ve led for four seasons on the first day of free agency, but the heart wants what the heart wants. The 35 year old Rochester, NY native went home, presumably to finish out his career close to the town he grew up in. at one point early in July, it seemed as though everybody was leaving the Canadiens, leaving their next captain with a huge question mark. Would it be Danny Briere? Nope, he left. All star defenseman PK Subban? Well, he was up for arbitration. As of July, a definite replacement was not clear at all.

Though nobody has been named, after Subban signed an enormous long-term deal – 8 years, $72M – if they don’t name him captain it’ll certainly shock fans around the league. The Canadiens have invested a lot in Mr. Subban, signing such a large deal while he was still a restricted free agent. Though theoretically they could give Subban the ‘A’ next year and let current alternate Andrei Markov try his hand as captain, I believe the more realistic option would be naming Subban captain now and letting him run with it. If that is the case, it’ll certainly be interesting to see how the often emotional defenseman handles such a public role. Knowing his relationship with the media, I believe he would settle in immediately.

Thomas Vanek and Steve Ott shared duties as captain in the beginning of the 2013 season, a short lived situation since Vanek was traded to the New York Islanders in October. Once Ott was traded to the Blues near the trade deadline (along with longtime goalie, Ryan Miller), the Sabres seemed to relish in their mediocrity, waiting for the 2014 season to begin.

Having signed the aforementioned Gionta to a three year deal, he’s the pick in most peoples’ eyes for their future captain. A longtime leader, along with the fact that he was anxious to sign with Buffalo, he should bring to the club something that hasn’t seemed to be there for a while: enthusiasm and a great sense of work ethic.

The Blue Jackets haven’t had a captain since Rick Nash left in the summer of 2012, leaving them with three alternates who have taken on the joint responsibility of leading the team. The departure of Nash was one that several fans were anxious for: though many fans showed their displeasure with the captain’s requests for trades out of Columbus, many others respected the homegrown superstar and his flashes of utter brilliance through the years, as shown below. 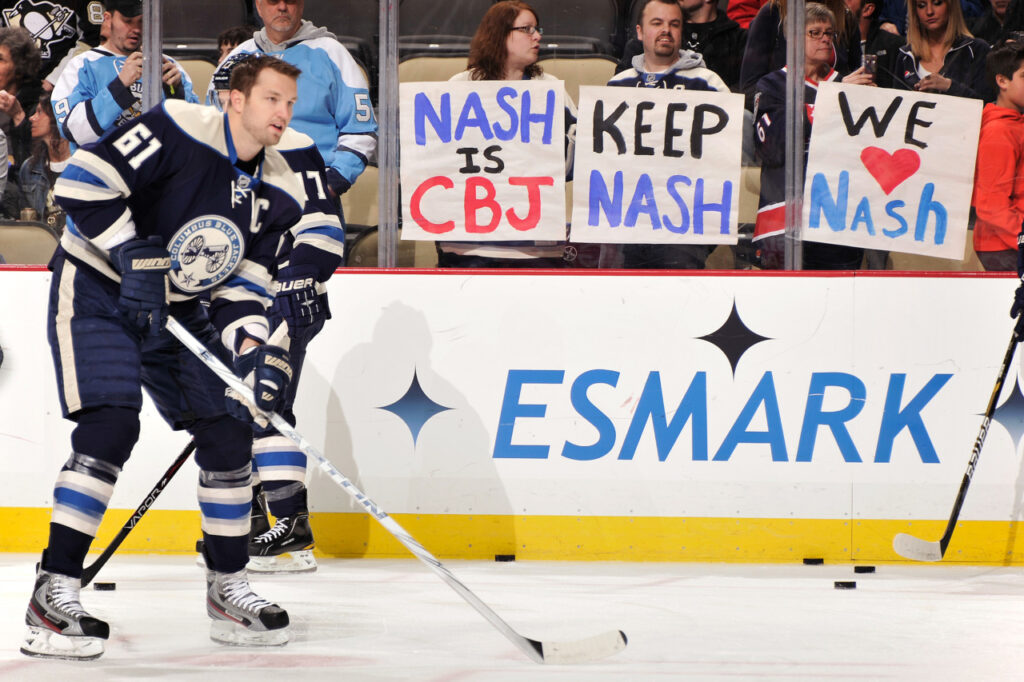 Sharing the role of alternate since Nash’s departure has been Brandon Dubinsky, Jack Johnson, Jared Boll and Mark Letestu. Though the seniority of the bunch belongs to Johnson, it’s more likely that if the Jackets do name a captain this year, it’ll be Dubinsky. Dubinsky has flourished in Columbus since his trade – ironically, as part of a package for Nash – and recently signed a long term contract extension that should lock up most of the remainder of his career there. It’s hard to say if Columbus will name a captain this year, as they have been doing well without one, but if they do, my guess is with Dubi.

Jovanovski came back to the Panthers in 2011 with the hopes of helping to rebuild the team. Unfortunately, after a lingering hip injury, he wasn’t really helping the team anymore, often missing games. He was bought out with a year and a little over $4M left on his contract this past summer.

With such a young team, there are two ways that the Panthers could go to address their need for a new captain. The Panthers could choose a veteran and promote 35 year old alternate captain Brian Campbell, who has been with the team and can lead the younger players to a playoff track. Alternatively, the Panthers could choose a young player, depending on his alternates to help him in times where his age might have him a bit lost. A good choice here would be 22-year-old Erik Gudbranson, a defenseman who has an international medal under his belt and a bright future ahead of him. With several acquisitions, my choice would be to promote Campbell and have him prepare the team for a young captain in years to come.

Of all these teams, I think the most interesting choices to wait for will rest in San Jose and Ottawa, as these leadership spots really are open for the taking.