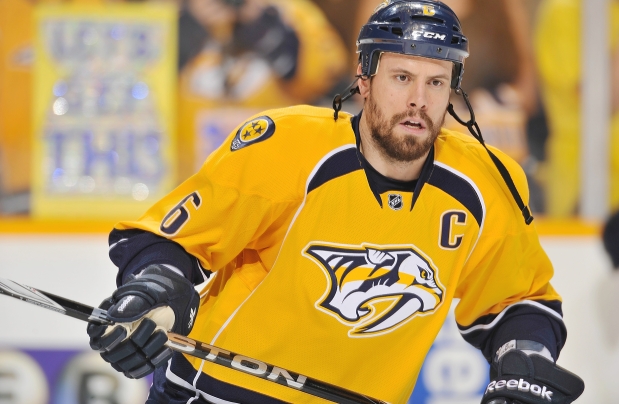 Per Elliotte Friedman, the Rangers may have been a catalyst to the Flyers sending Shea Weber that now infamous offer sheet in 2012. The Nashville Predators were at a stand still with their star defenseman, and the Flyers swooped in and sent him an offer sheet for $110 million over 14 years. The interesting tidbit here is that Friedman states that Weber, who visited New York during his “super secret” tour of potential suitors, may have been Broadway bound via a trade. That news is what prompted the stunning offer from the Flyers.

All that is well in the past, but it’s August and there isn’t much to write about. So I had a little fun and started to piece together what the Rangers could have sent to Nashville in exchange for Weber. The deal from Philly came on July 19, 2012. The deal for Rick Nash came on July 24, 2012, so this predates the Nash trade. New York would make room for Weber’s cap hit (likely not in the $7.85 million range, but let’s say $7 million).

Brandon Dubinsky is again a no-brainer in this deal. His cap hit ($4.2 million) was too large for the Rangers to get under the cap, and he was becoming expendable.

Michael Del Zotto would be another logical choice to head to Nashville, as they would be in need of a puck moving defenseman since they would be losing out on Weber and Ryan Suter. It’s not as much of a no-brainer as Dubinsky, but it makes sense.

Tim Erixon, at the time a top prospect, also makes sense from a cost perspective. As does a first round pick.

So basically, we are subbing MDZ for Artem Anisimov, and the Rangers land Weber instead of Nash. The value is fairly comparable on both sides. So, who would you prefer Slats traded for: Nash or Weber?