No matter which way you look at it, the Rangers have significant turnover this season. They lost Brad Richards, Benoit Pouliot, Brian Boyle, Derek Dorsett, and Dan Carcillo up front. They lost Anton Stralman on the blue line. But hey, 100% of their goalies will be back this year, so that’s a plus.

Derick Brassard and John Moore remain unsigned, but that’s not really a big concern. Both will be back and both will fit under the salary cap. Piggybacking off Suit’s line combinations post, here’s what we could be looking at on opening night: 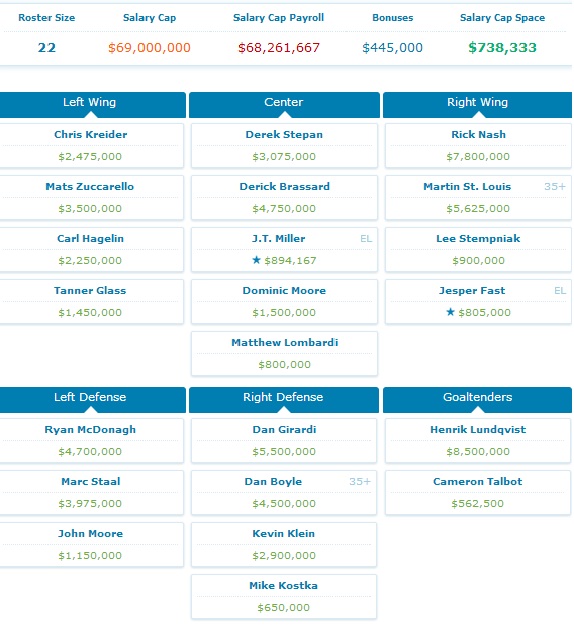 It’s worth noting that this is not an attempt to figure out line combinations. Suit did that already, and I just based this off last year’s combinations the best I could.

Anyway, you’ll notice the top-six pretty much remains the same, aside from swapping Mats Zuccarello and Carl Hagelin. Zucc belongs in the top-six, and Haglein belongs on a third line. Plus, his defensive ability will surely balance out what will be some defensive issues should J.T. Miller make the squad as the 3C.

I slotted in Jesper Fast as the 4RW because he’s a right handed shot and appeared to be NHL ready. Naturally, Oscar Lindberg and Ryan Bourque will give him –and Miller– some competition. The cap hits for those guys are all interchangeable, so it doesn’t really matter who slides in where from a cap perspective.

Alain Vigneault likes to carry extras, hence keeping Mike Kostka and Matt Lombardi. There’s not much wiggle room for injuries, which could come back to bite them in the rear, but for now, this is most likely your opening night roster.