Should the Rangers trade negotiating rights of Boyle / Stralman? 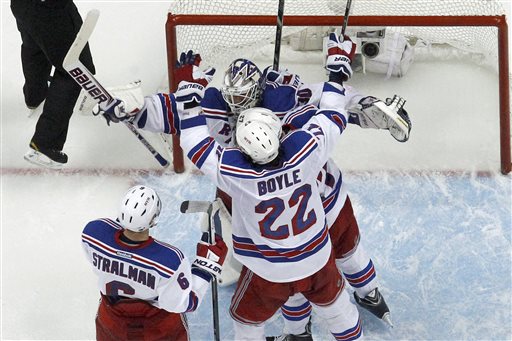 Based on the comments made by both Brian Boyle and Anton Stralman, it looks like both will be playing in different uniforms next season. Boyle has said he is looking for a bigger role –likely a third line role with less defensive zone starts– and won’t get that in New York. Stralman is looking for “security” for his family, which is code for “money and term.”

We haven’t heard much about the ongoing negotiations with Boyle’s camp, but the Stralman negotiations aren’t going so well. Stralman wants more money and –likely– years than the Rangers are willing to offer. Considering Nikita Nikitin’s absurd deal ($4.5 million for a marginal defenseman is indeed absurd), Stralman is likely getting at least that, and probably more, over a longer term. That’s too expensive for the Rangers.

With the draft just one day away, it makes you wonder if the Rangers should pursue trading their negotiating rights to recoup draft picks.

In trading their negotiating rights, the Rangers will communicate to the fans that these two players are no longer in their plans for the future. That’s a decent risk, as both players were important to the run to the Stanley Cup Final this year.

However, it is also an attempt to recoup the draft picks. The Rangers had five picks last year, four the year before, and are looking at four picks this year. All of those traded picks have led to a bit of a bare prospect cupboard.

Boyle may not fetch more than a late round pick, but Stralman should fetch something interesting, perhaps upwards of a third round pick (Dan Boyle fetched a fourth rounder, and Stralman is considered a prize this offseason). Adding a pair of picks to either this year’s or next’s draft will be critical to a team that is in the middle of three straight years without a first round pick.