Would the Rangers and Jason Spezza make sense? 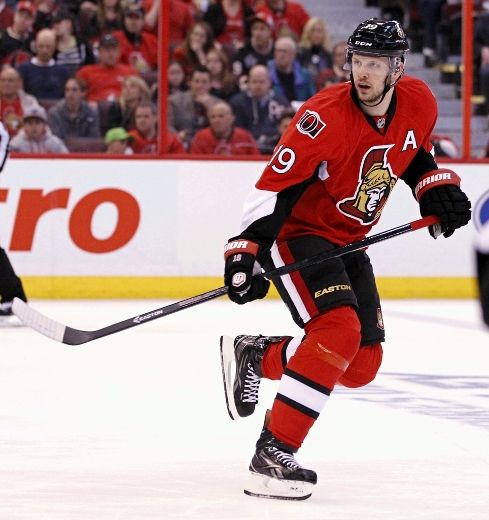 The Rangers need an elite playmaking center, Jason Spezza wants out of Ottawa and the Senators General manager, Bryan Murray has already publicly admitted he won’t get full value for his star center. There are countless reasons why Jason Spezza makes sense for the Rangers, not least because of positional need. Of course, with the Ducks, Blues and other Western Conference teams heavily rumoured to be looking at Spezza, the Rangers may not even be in the picture. This much we do know; the Rangers have a need, Spezza has ten teams he won’t go to and that list doesn’t include the Rangers.

The Rangers had their opportunities against the Kings in the Cup Finals. They didn’t make it a closer series in part because they did not convert enough on the powerplay and because the Kings were the better team down the middle. Spezza helps address both issues. He has been a powerplay force, he is an elite playmaking centre and he is strong in the face off circles.

Perhaps most crucially is the fact that Spezza doesn’t come with a significant contractual commitment. With only one year on his remaining deal the Rangers wouldn’t need to commit to Spezza before seeing whether he can perform on the New York stage and given the acknowledgement by Murray he will likely get less than equal value there’s a chance for the Rangers to steal an elite player who fills a need.

The Calgary Flames (a club who made Spezza’s list of teams who he won’t consider) have been rumoured to be interested and are thought to be offering Jiri Hudler, Mikael Backlund or Dennis Wideman and one of their several second and third round draft picks. All talented players but that is a package the Rangers could afford to match, even as their prospect pool isn’t as deep due to recent graduations.

The biggest questions relevant to the Rangers are how much do the Rangers decision makers feel the club are in a win-now mode and whether they’re willing to part with a roster player and a pick. If the decision is Spezza can put them over the top, there are enough assets within the organisation to make a deal. Spezza in New York slides Derek Stepan and Derick Brassard into more appropriate positions on the second and third lines and gives the Rangers legitimate depth and strength down the middle.

So what are the dangers with taking Spezza? Is Spezza just a younger version of Brad Richards and could he decline in the same manner Richards has? Is Spezza too injury prone? Is just one guaranteed year of Spezza (expiring contract considered) worth giving away yet more assets? There are plenty of question marks surrounding Spezza and whether he’s worth it but the Rangers need an elite center to compete with the likes of the Kings and Spezza represents a lot less long term risk than chasing a talented but risky free agent such as Paul Statsny.

If you give Spezza an elite winger such as Nash then Spezza, health allowing, is still an 80 – 100 point player in the regular season; he just hasn’t had that kind of support regularly enough in Ottawa. Now, with Brad Richards officially an Ex – Ranger attention will turn to the Rangers need to fill their center position once again.

The last time the Rangers had an 80 point center was when the surprising and yet underrated Michael Nylander rode shotgun with Jaromir Jagr way back in 2006-07. In that same time frame Jason Spezza has broken 80 points three times and also had 66+ on two more occasions. He’s the type of player New York needs. Spezza makes sense for so many reasons so it will be interesting to see how Glen Sather and co. tend to a major organisational need.