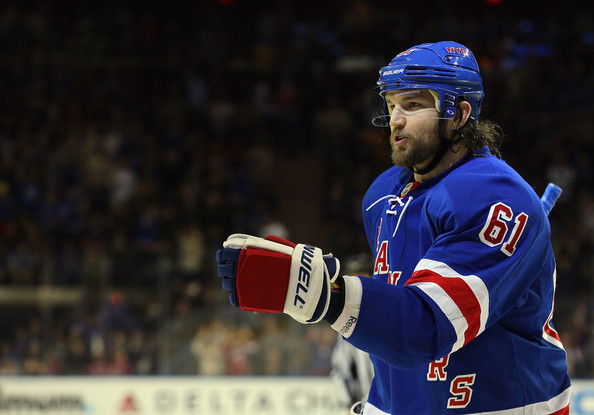 Nash is Canadian for frustrating.

Nash will enter next year closely watched by one and all to see how he responds to what was a hugely difficult postseason for him. Nash needs to produce more, and more consistently, given his contract, reputation and incredible size and ability. Nash managed to score a solid 26 goals in the regular season which was interrupted through injury, but everyone knows he should be the Rangers best goal scorer and he wasn’t. Grade: C

Brad Richards – Thanks for trying Brad. Brad Richards is almost certainly an ex-Ranger as his buyout is a mere formality at this stage. During the regular season, Richards actually produced quite well given his diminishing importance to the club on the ice. With 20 goals and 51 points, Richards was solid. However his second lowest shooting percentage of his career and being arguably the biggest defensive liability amongst Ranger forwards, Richards was very hit and miss.

In the post season Richards started well, had some huge moments that will always be appreciated by the Ranger faithful (the game seven goal in Pittsburgh?) but ultimately he faded into irrelevance. Richards’ tank is almost empty and it has started to show. Richards still managed to be a great influence off the ice, a class act throughout and a great figurehead for a group of players that truly defined the meaning of team. Despite diminishing returns he will be missed. Grade: C

Chris Kreider – Hopefully Chris Kreider’s huge breakaway missed opportunities against the Kings in games two and five won’t haunt him. With his self confidence, upside and on ice ability you imagine Kreider will easily put his disappointments behind him. Kreider had an up and down regular season, typical of a rookie. At one stage he was a solid candidate for the Calder trophy and 17 goals in just 66 games is a solid return for a player who started the year in the Minors.

In the playoffs we saw what Kreider can do to teams. He played physically, he scored big goals, he had the best point/game ratio (0.96) of any Ranger forward but he was still inconsistent defensively and needs polish. Kreider’s exciting, If only for what he can become when he eventually puts it all together. Grade: B-

Marty St Louis: If we are being honest, as a Ranger, St Louis was poor in the regular season. Trying to do too much he ended up doing too little and many fans had already hit the panic button after a meagre 1 goal in 19 goals. Then the playoffs started, then tragedy struck.

As someone who has lost a parent unexpectedly (also, my mother) I can only admire and hugely respect the way St Louis handled such a tragic situation. St Louis defied the huge emotional burden, produced several key moments as he led the Rangers with 8 goals in the playoffs. St Louis led all Ranger forwards with 15 points and proved once again that when the playoffs arrive, he delivers.  Grade: B-

Carl Hagelin – If Carl Hagelin ever learns to finish his chances, and adds a little more offensive consistency to his game he could be a star. As it is, Hagelin has developed into a fine weapon for the Rangers with his impressive penalty killing, his lethal speed and his undeniable work ethic. With 17 goals and 33 points in the regular season Hagelin was a great secondary piece for the Rangers.

In the post season Hagelin grew in front of everyone. With 7 goals, Hagelin produced above and beyond what was expected and was one of the few Ranger forwards that intimidated the Kings – because of his speed. Hagelin’s still too streaky as he had five streaks of eight games or more without a goal in the regular season but, already a core Ranger for his wheels and PK skills, he still has more upside and that’s perhaps the most exciting part of Hagelin’s future as a Ranger. Grade: B

Derek Stepan – Is the expectancy on Derek Stepan unrealistic? He was close to a point per game player in the lockout and potted 57 points this year while also contributing 15 points in the run to the Cup Final. Yet, with a slow start to his season, with the frustrating tendency to pass up good shooting positions and a poor faceoff record, Stepan still leaves you thinking he could do more.

Stepan has been a remarkably consistent and durable Ranger and showed great resilience to endure the broken jaw against Montreal and yet come straight back with a two goal game in game five of the Habs series. Stepan and a solid season without wowing anyone yet was near the top of all major categories for the Rangers which underlined his relative consistency and importance. Grade: B

It is a compliment to the Rangers depth, bottom six forwards, and the team’s defensive ability that this team made the Stanley Cup Final without a single member of their top six group of forwards really having a particularly strong season individually. This group of forwards has a lot of room for improvement and that bodes well for everyone involved with the Rangers.