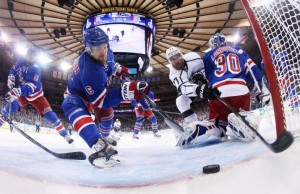 Good morning, BSB’ers. You’ll have to forgive something of a sleepy “Thoughts” post. I haven’t even had a full cup of Earl Grey yet. The Rangers are back in Los Angeles tonight trying to hold off the fates and send the series back to New York, if only to give the Blueshirt faithful further coronary/anxiety/substance abuse issues. Here are some scattered thoughts on a rainy morning…