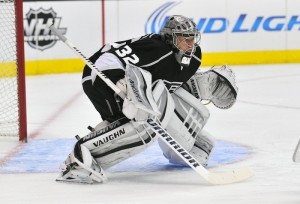 On Wednesday evening, the Rangers will play their first Stanley Cup Final game since 1994. Twenty years worth of anticipation, a big-market, celebrity-fueled war between New York City and Los Angeles. And, at the center of it all, a marquee goaltending matchup for the ages. Since I have done my Preseason Top 30 Goaltenders list, Henrik Lundqvist and Jonathan Quick have ranked number one and two, respectively.

Most people associate Quick’s playoff pedigree with his 2012 Cup/Conn Smythe winning performance. As a general rule, his playoff performances have been stellar, amassing a 2.27 GAA and .922 save percentage over five playoff seasons (although it is slightly skewed because Quick played almost 30% of his playoff appearances during 2012). This year, however, Quick has been rather pedestrian (we’ll get there in a minute). In fact, there are a number of pundits who are calling a clear goaltending advantage to New York. Let’s break down Quick’s style and figure out why that is.

Quick (no pun intended) aside, I did a more informal right up comparing Quick’s style to Mike Richter a couple years ago, and have small snippets in my Top 10 rankings from the past few years, here and here. Same format as always applies, Stance, Crease Movement/Depth, Equipment, Puck-Handling Ability and Exploitable Weaknesses. Here we go…

As I mentioned in the Mike Richter comparison article, Quick has a compact stance. He relies heavily on explosive movement and unencumbered mobility. He has a relatively modest setup from a width standpoint, and maintains a balanced foundation from which to generate considerable power.

While in his stance, Quick has an exaggerated arch in his lower back, which forces his chest forward. This allows for him not to fall forward when moving laterally. It’s a very difficult setup and requires a tremendous amount of athleticism and lower-body strength, but it keeps him in the play and mobile on second and third opportunities.

I feel like a broken record on this subject, but Quick’s movement, both laterally and telescoping is beyond elite. The only goalie who is even close is Carey Price. Quick plays an aggressive game, partly because he isn’t that big (6’1”, 218lbs) and because he has the ability to recover effectively and not catch himself completely in no man’s land.

From a lateral standpoint, Quick covers a tremendous amount of net from his set position. He has become a renaissance man when it comes to executing split saves. He has an absurd level of flexibility and uses the splits to cover the entire width of the net and then some. When he gets into full desperation mode, the results can be breath taking.

For as long as I can remember, Quick has been a Vaughn guy. He is currently wearing the Velocity 6 line, which is brand new to market. It infuses carbon fiber into the line and claims to drastically reduce weight while maintaining its structural integrity (sidenote: Vaughn pads have a reputation for “shrinking” in the thigh-rise with repeated usage).

He wears a custom set up in this line, with the interior calf-wraps exceptionally close to his leg, leaving almost no leg channel to speak of, and wears the pads extremely soft and flexible to both aid in mobility and soften the distances rebounds travel, which helps keep shots corralled near his body.

Not unlike most NHL goaltenders, Quick is a competent puck-handler. He can easily deal with stopping pucks behind the net and distributing it accordingly. He is not going to make long stretch passes or arching clears across the middle.

The wrinkle with Quick’s puck handling is that he has a very active stick around the net. It’s not technically puck handling, per se, but his stick does play an active role in his style. While he has the ability to follow players laterally, he prefers to cut off the forward’s route if he is close enough to poke checking range. Something for the guys driving to the net to watch out for.

Two years ago, this section would have taken on a totally different perspective. In 2012, Quick was ruthlessly efficient and in complete control. He had the proper allocation between technical and athletic saves, and looked pretty unbeatable.

This year however, he has taken a big step backwards. When I have criticized athletic goaltenders like Bobrovsky, Varlamov and Gustavsson for putting their athletic game first and technical game second, its usually a maturation issue. Playing an athletic style is fun, plain and simple. However, as you enter your prime and gain experience, you realize that your technical foundation is what gives you consistent success and your athleticism becomes a tool that allows you to make stops that lesser athletes couldn’t. 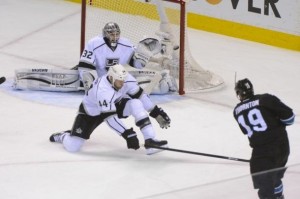 Quick has seemingly abandoned his technical base and drifted into full athletic territory, in direct contrast to the paths elite goaltenders usually take. You can see it in his split saves (which he is using far too often at this point). Instead of sliding over in splits with full extension, you can see him resting his elbows on the tops of his pads and taking a blocking position within the split (see photo above).

When you combine an athletic technique with a blocking technique, something has gone awry. This isn’t to say that Quick isn’t still a world-class goaltender, he absolutely is; but he has gotten himself into some bad habits over the past year or so that can be exploited.

Additionally, as we saw in the Chicago series, he is susceptible to heavy traffic in front (who isn’t) and his new found overreliance on the reverse VH technique (see right) keeps him somewhat exposed on bad angle shots when he’s had to be mobile around the crease.

Despite his somewhat curious change in technique, Quick remains one of the best goaltenders in the game today and has the ability to completely shut down even the most potent offenses. He has been a little shaky this year, which could open up an opportunity for the Rangers.

They are going to have to execute their game plan effectively or they run the risk of allowing Quick into their heads, in which case the matchup advantages the Kings already have become even more pronounced. The name of the game is going to be to use Quick’s athleticism against him while generating traffic in front.  Solving Quick will still be a monumental challenge, but I have much more confidence against this years incarnation than the monster he was in 2012.